Rioters and government both make noise. 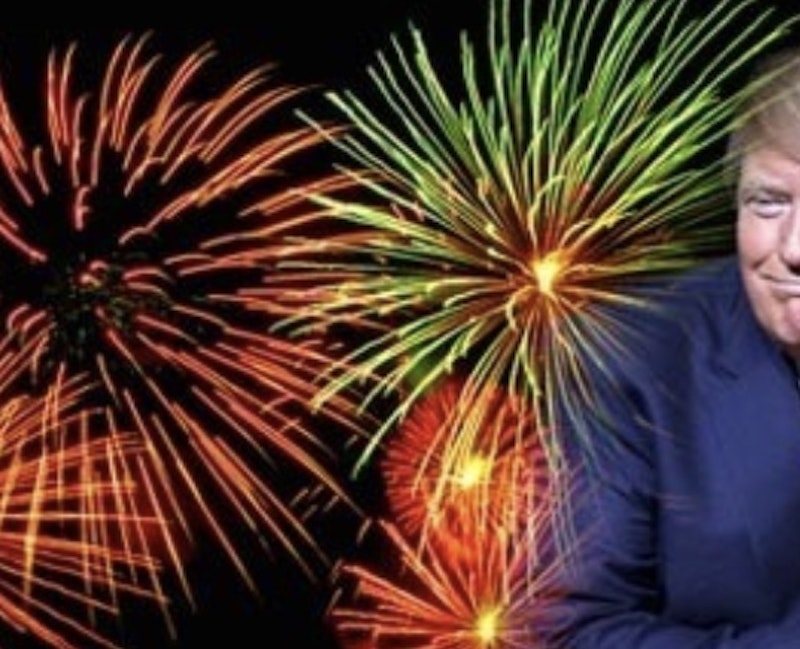 What a strange Fourth of July this weekend will bring, climaxing several unpatriotic days of sights such as red paint sprayed like blood by vandals across two George Washington statues in New York City’s Washington Square Park on Monday.

Friday last week saw the Democrat-dominated House of Representatives (knowing full well their vote will not be affirmed by the Senate) vote with dubious constitutionality not only to make Washington, DC the 51st state but to rename it to erase mention of Christopher Columbus, hoping to make it “Washington, Douglass Commonwealth” in honor of heroic slave-turned-abolitionist Frederick Douglass.

Monday saw the Democratic Party—not some tiny fringe group—tweet that if Trump appears at Mt. Rushmore this coming weekend, we should disapprove because that site is associated with “white supremacy.” Well, in a country that is still two-thirds white, many parts of our embarrassing history will have such associations, but despite the left’s best efforts, some of us recall Mt. Rushmore being associated with other, less sinister things as well.

The left claims it wants us to know history, but mostly it wants us to forget the good parts, so the bad parts will make us feel guilt and turn to the left for absolution. The tactic has never been more transparent or heavy-handed than it is now.

But surely, well-meaning, trusting people might argue, the left and the left-leaning factions of government are trying to achieve good things, however clumsy they may be? It would be hasty, paranoid, possibly even racist to think government wanted to work in tandem with rioters to heighten chaos rather than just bungling honest efforts to keep the peace, right?

I‘m not so sure. Many of us have extra spare time on our hands right now. Perhaps the healthiest thing we can do, the best shot at building a better future, is to use that time to think about how government shows a natural affinity for common criminals.

That idea still sounds anarchist and radical in 2020, but I’m not convinced it will seem so in, say, 2030. How quickly does conventional wisdom change when we take a closer skeptical look at government, as society periodically does? Here’s one tiny pop culture indicator, and you don’t have to look way back to the patriotic 1950s to find it.

As recently as 2009, a trifling 11 years ago, the action-comedy TV series Chuck had a scene in which both a CIA agent and an NSA agent were depicted as scoffing at the very idea, played for laughs, that a tech mogul might be engaged in secret mass surveillance of the citizenry. After Edward Snowden’s 2013 revelations, not only is such mass surveillance not a joke, it’s taken for granted, whereas the idea that government agents themselves wouldn’t believe in such things—especially an agent from the NSA, for crying out loud—is the unbelievable part. So, might government want some chaos in the streets as an excuse for subsequent crackdowns and still more surveillance? Why not?

Neither government nor the usual political activist factions have done a thing to reassure intelligent people that the government doesn’t engage in elaborate “psy-ops,” psychological operations, to keep the populace divided, confused, hopeless, and frightened. Take this Fourth of July weekend’s fireworks, for example.

New York City’s literally-communist mayor, Bill de Blasio, fresh off the dual triumphs here of racking up about one-third of the nation’s corona deaths (by packing corona cases into nursing homes) and doing nothing while looters ransacked Midtown and Lower Manhattan, announced that, in response to mounting complaints about fireworks set off at odd hours and in odd places (while people are already nervous about the looting and such), he’d look into having the fire department crack down on fireworks more—but would also green-light an unprecedented plan whereby—get this—instead of an hour or two of Macy’s fireworks on the Fourth, there are five days of fireworks (from the 29th through 4th), randomized and at unannounced times (ostensibly to avoid corona-spreading crowds from forming), at unexpected locations throughout the city including skyscraper rooftops.

And still they call the people who use phrases like “psy-op” crazy.

But I’m sure many New Yorkers, me included, will remain generously willing to chalk it all up to ordinary government stupidity, barring clear evidence to the contrary. And if any panicked shooting ensues amidst the blast noises, New York City in its traditional fashion can always respond to the carnage by fining the NRA, cracking down on sparklers, or reinstituting stop-and-frisk policing practices. Any psychological trauma can be dealt with, New York-style, via increased government spending on mental health services.

Here’s fundamental psychology advice I’ll give you for free, though: Trauma makes people more pliable—at least in theory, though the psychopaths who rule us may well have pushed things a bit too far this year. They want us ever more pliable, but you may notice a certain impatience building in the populace, and despite their divisions, they’re not as slow to blame the government for their woes as they used to be.