RQ is reminded of 1649 and the execution of his innocent friend King Charles I. 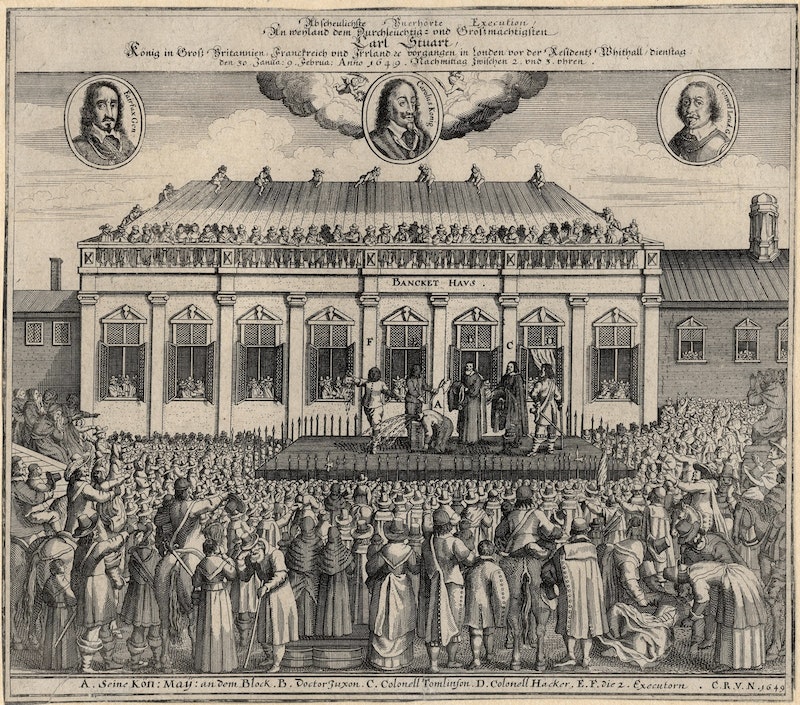 If I were ever in a self-defense situation with Nicky Smith, I’d simply ask him to exit my presence. Non-violence is best practiced always and often. I learned this not in the Civil Rights movement of the 1960s, but the interregnum beginning in 1649 in the United Kingdom. Before the public gets carried away with speculation on various politicians, presidents, and leaders of business and entertainment involved or pictured with Ghislaine Maxwell, let me say this: King Charles I didn’t have to die. His execution was as civilized as such a barbaric ceremony could possibly be, but he died an innocent man. The groups and individuals pushing for his death the most weren’t even that committed to their cause. I’d ask them, “Why Charles? What has he done? What has he done to you? Has he raped you? Has he stolen from your garden? Has he eaten your bread or poisoned your well? What is the source of your discomfort?”

The people of this planet have always been impatient. Things were not going well in the mid-1640s in the UK, but there wasn’t an easy-to-identify villain amongst the malaise. There was no Hitler, Stalin, Mao or Nixon in their kingdom: they were all idiots, drunk on mead and half blind from bad meat. I don’t even think coffee had been discovered yet (at least north of the Equator). No one knew what was going on in 1649 or why they were so crazy and unhappy. And yet they killed an innocent man simply because he was in charge. Charles I didn’t hurt anyone. He was a good man.

I visited him in his last days, at Saint James Palace. He was receiving visitors in his bedroom, condemned to death but nevertheless granted the grace of a private death, a mourning alone, “sitting shiva” before anyone knew what that meant (again, at least in the United Kingdom—to be honest, I didn’t meet a Jew until the Enlightenment. None of us are perfect…), and I was happy to see him. “Rooster, you don’t understand… no, you have no idea… this world, these people… I am tired of them and their nonsense… I am sick of trading body for body for body… I want to go home now…”

“No, Bennington.” I turned to Charles and made sure none of his servants or children were listening. “You can’t leave me here. NOT AGAIN. It is 1649 in England and I will die forever if you leave me here.” Charles looked at me—well, okay, really it was Bennington, Charles was long incapacitated in his own body. “Rooster, you think this is fun? I have to feel these peoples’ aches and pains. This King can’t shit right. Do you know how uncomfortable that is? I think he’s gay, too.” I backed away from Charles, aghast. “And what’s wrong with that, Benny?” He shook his head. “Nothing, nothing—in our time. Not now. Not in the Middle Ages.”

“Okay, I see what you mean.” I started tearing up the royal carpeting with my spur claws, anxious to leave the sight of an upcoming execution. The monarchy as it was ceased to exist after Charles’ death a few days later, and of course Bennington agreed to go through with it, only under insurance that the execution be quick, clean, and painless. “I don’t want to go through what that Mayan asshole had to go through again. Do you know what being fed 30,000 spiders feels like? Would you like to know? I could demonstrate!” Even when Bennington is in other peoples’ bodies, he simply plays too much.

I made sure the execution was quick and clean. But Bennington and I spent the rest of the interregnum—from 1649 through 1660—in Ireland, where the people were on the whole fatter and more alcoholic and thus easier to outrun. But living in the U.K. during the Dark Ages was pretty easy. Everyone was stupid and drunk. There was no efficiency or work ethic. It was a lot of inbred royalty and peasants writhing around in their own fluids and filth. It reminds me of our current moment, that crisp January day in 1649 when Charles died and Bennington spent the next 11 years of his spiritual life inside of a macaw (he savored every moment in that beautiful bird’s body). For 11 years, we were adrift: no leaders, no hope, and no future.

You, a mortal human, may ask: does it get better? I can tell you yes, eventually. But you might not live to see it, and that’s for the best. Eternal life has its own existential catastrophes and unique despair. I wouldn’t wish it on anyone, but I hear human beings say that about their own absurdly brief lives on this Earth. As far as I know, the soul of a human doesn't extend beyond its body. Only all the birds can fly—not just in the sky.