I Don’t Trust the Police

A lifetime of brushes (and worse) with the law. 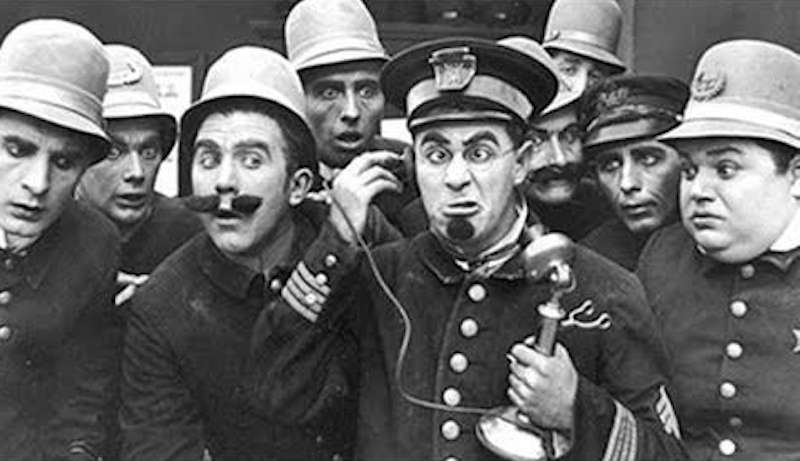 Cops scare me. “Normal” people freak me out too, but I’ve been especially wary around officers of the law. I was arrested more times then I care to remember. There were beat downs and abuse in drunk tanks, and during marijuana busts. In the wild years of youth I shot my mouth off in drunken disorderly stupors and challenged them. It was always a bad idea. Learning the hard way to keep my mouth shut except to "Yes sir, no sir" my way out of some stinky situations. I stumbled down Harford Rd. one summer evening with some party friends and we walked past the local post office. There was a cruiser with a cop inside just sitting with his engine running in the parking lot. As we passed I barked at him like a dog. He stopped us and wanted to know our names. We were stoned. We couldn’t stop laughing. He shook his head and told us to scram.

As a kid in Baltimore the police reminded me of silent movie comedies when clownish cops chased some bad guy with a black mask covering his eyes looking like a bad porno actor, carrying a big bag of money with a dollar sign on it. The old black and white sedan, red cherry top light turning round and round in a rear view mirror always signified the party was over. When you need a cop they’re never around and when you call the cops they show up late. I always wanted to believe cops were good guys who were there to protect and serve the people. Instead they're the hired thugs. All part of a political machine made of racists who ran everything in Tinytown.

Corruption and police brutality was commonplace in Baltimore but somehow seemed okay in my childhood. It was buried deep, dirty and dusty enough to ignore the truth. It was always funny business as usual. We didn't see or realize the payoffs, bribes, extortion and murder that happen every day. Everybody was on the take. The biggest thing that went unnoticed was the blatant racism of the white power groups like The KKK, John Birch Society and white power/Nazi organizations. Many of these secret orders also recruited members from the military and local/federal law enforcement agencies. Behind the powerful unions of the Fraternal Order, widows and orphans funds and the silent blue line of cover-ups. The law is above the law. Put in place to protect the privileged class and keep down the poor majority.

The original police were formed in 1751 in Philadelphia and Richmond. In 1807 they came to Boston, and the first official police department in New York City was organized in 1845. Other cities soon followed suit. The word POLICE is abbreviated for Public Officers Legal Investigation & Criminal Emergencies. Some would beg to differ and say it stands for Persons Of Low Integrity Controlling Everyone. Even before police formed departments in the South there were already forces of men of up to 100 or more that organized unofficial slave patrols to punish, lynch, murder, rape and capture runaway slaves. The Sacred Order of the White Knights of the Ku Klux Klan was born out of this white vigilante mob rule.

In the Northern states these silent invisible empires consisted of union busters and strikebreakers, scabs, hired muscle and paid thugs who busted up protests and strikes by poor workers in major cities. There were textile sweatshops where women workers were beaten and arrested by hired prostitutes, pimps and ex–boxers for protesting and striking against sweatshops for higher wages and a better quality of life.

Connect the dots with every major uprising, rebellion, protest, strike and revolution and the police were always there to squash, smash and beat it into oblivion. Today’s police forces across the country and most of the world have become militarized armies of jackbooted killers put in place to protect the interests of political and capitalist interests. The shiny tin badge a person wears over their heart is all that stands between equality and tyranny. The rule of law isn’t the authority on personal freedom. It was always us and them. It’s finally justice for all.

Things will change. People are fed up with the bullshit of a mobster president and his gang of thieves. We’re sick and tired of the ball of dung that rolls up the hill to the powerful pigs. The jig is up; they’re running scared. They can no longer hide the true facts under double talk, shady deals and dirty deeds. The revolution is here and they know it. Get ready: here we come.