How the Right Made Its Mess

A look at showbiz and the conservative psyche. 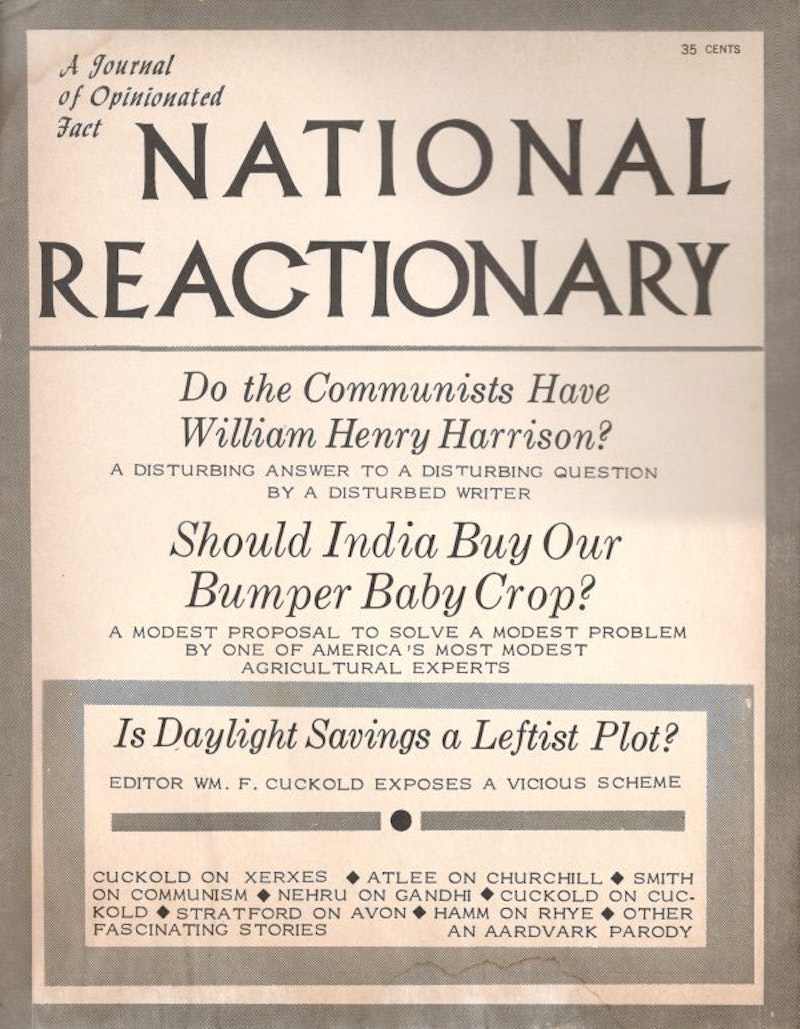 There’s no polite way to talk about modern conservatives. Over the past 60 years they’ve become slaves to an addiction, one that has rotted their morale and hygiene until they’ve soiled themselves. The resulting mess on the floor is known as the Trump administration. Some of the addicts recognize that the mess is actually a mess and wish they could clean it up. They still like their heroin, though. And most of the addicts see nothing wrong at all, except that fussy, ill-natured people keep objecting to the smell.

What is this heroin? The belief that the world really is the way it appears: that is, something entirely centered around whoever happens to be looking at it. Life makes more sense when taken that way. Emotionally it fits better, even when the emotions called forth are frustration and outrage. (How dare they make me press 2 for English when it isn’t supposed to be like that. The “isn’t supposed to be” is the thrill here, the certainty that the world belongs your way and nobody else’s.) The outlook—I have two eyes and I know what’s in front of me—allows for certain strengths. Conservative writers are at their best when they stay off policy and stick to the immediate. Get them down to the level of how words sound and feel, or of what people think versus what they tell themselves they think, and you may see superior work. Catch them on policy and you’re liable to hear about Paul Ryan or Newt Gingrich.

Conservative thinking doesn’t have to lead to bombast and grandiose self-assertion. In the past, conservatives learned as well as anyone that the immediate view wasn’t the only view, important as it was. But we live in a time when the population is pumped full of television, movies, and other media, and these have produced some crazy growths. Showbiz thrives on the immediate and the sense that no one matters but the person watching and the person being seen. And it’s a force most available to people with money to spend, such as the Republican Party and its backers. Operatives have done well by mastering showbiz tricks, as has that model of snazzy presentation and made-up drama, Fox News. But showbiz has turned the right wing’s myopia into something more powerful, a need to see the world as something that fits snugly about the ego. The effects have been terrible.

Consider that in 1953 go-it-aloners were merely a pain in the ass to Dwight Eisenhower, one faction among several in the Republican Party. In 2003 the go-it-aloners ran the party and invaded the Middle East. They figured that whole part of the planet would straighten itself out and fly right if the United States just punched it hard enough. This was a movie solution, one sold by people good at yapping on TV and celebrated by a photo op (it involved an aircraft carrier and a “Mission Accomplished” banner). In the half century between one era and the other, the GOP and the right had been infected by showbiz. The individual that they assumed to be at the center of the world was now not just an individual. He was Stallone with a giant gun, or Ronald Reagan with an army, or George W. Bush with another army and a world to push around. Having tried and failed to turn a Middle Eastern war into a movie moment, conservatives wound up trusting to a reality-TV star known for pushing people around. This hasn’t made things any better.

“If you aren’t a socialist at 20,” ran the old saying, “you have no heart, and if you are a socialist at 40, you have no head.” That is, one became a conservative as one cooled down. Father, sitting in his study, listened to his shiny-eyed son getting loud about ideals. Twenty years later a youngster from university would be holding forth—and there’d be the son, gray at the temples and shaking his head. In between life had taught Mr. 40 a thing or two: slow and steady, don’t rock the boat, let sleeping dogs lie. He’d come to appreciate Eisenhower or Stanley Baldwin or some other slow-spoken, thin-haired codger who listened to the bond market. Above all, he’d learned that fine words live a long way off from hard facts, meaning the facts encountered by people getting things done in the world.

Not anymore, not in the U.S. At 20, 40, 60, or 80, the typical American conservative bays for action and typically that means smiting. The weaknesses of the old right were selfishness and dumbness. The abiding trait of the new gang is bloody-minded fantasy. They feel the rage that comes when you keep being told the world is yours and it keep proving that it isn’t. They insist on a dream and wind up with a mess, and the rest of us have to live with it.