What Jeremy Corbyn Could Learn From America’s Democrats

People want an opposition that opposes. 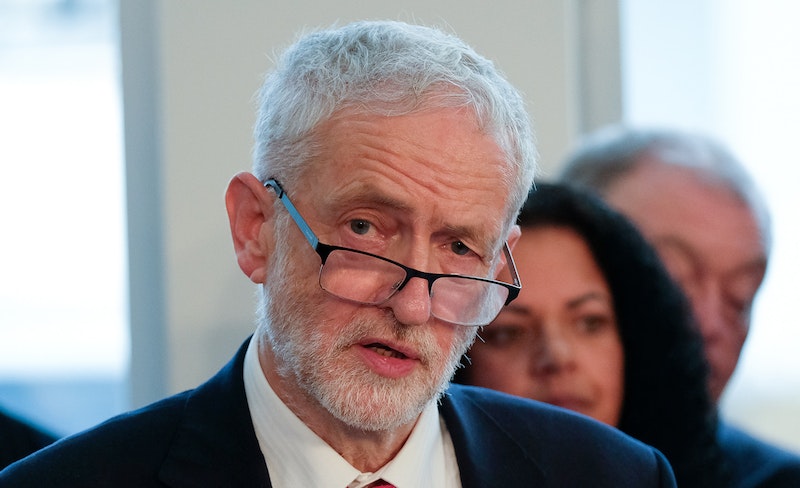 The left in the United States loves to hate the Democrats, and have plenty of good reasons. Democrats regularly vote to increase military spending and cosign invasions and drone wars. Democrats on the national and local level embrace "school choice" policies that shovel funds desperately needed by local schools into the pockets of private charter executives. Democrats support tough on crime policies; they've supported unnecessary and cruel border security.

But it could be worse. Look to the UK and Jeremy Corbyn's Labour Party. The UK is currently in the grip of an endless policy meltdown. In June 2016, the conservative Tories held a referendum on whether the UK should leave the European Union. The Tories didn't want the measure to pass; they held it to protect their right flank—far right parties had been demanding a public vote on the issue for years. But to the Tories' horror, Brexit succeeded.

The EU and the UK are so intertwined economically that there’s no way to separate them without significant economic turmoil in the UK. The Tories don't want to have to preside over that turmoil. But they fear that they’ll split their coalition if they don't continue to support Brexit.

The opportunity for a left opposition party is clear; just oppose Brexit and demand a new referendum. Or say, "This (non-binding) referendum was the doing of the Tories, and we're not going to abide by it because it’s stupid."

That's an important position because Brexit is, in part, an anti-immigrant, racist movement. The EU has many failings, but the advocacy and energy around Brexit was centered on xenophobic antipathy to immigrants. As part of the EU, Britain allows easy travel across its borders to all EU citizens. Brexit supporters claimed that this immigrant-friendly policy was responsible for the UK's economic troubles. It's an argument familiar to Americans who have spent three years hearing Trump spew hatred about his dumb wall.

In the US, the Democrats, surprisingly, have been good about rejecting Trump's wall, and its hateful symbolism. Trump shut down the government for a month to force Democrats to vote for money to build a giant barrier on the Mexican border. Democrats refused to budge, Trump's popularity plummeted as the shutdown ground on, and then he caved in the face of a work stoppage by airline workers. By holding firm in opposition, the Democrats defeated Trump's nativist idiocy and empowered labor. Not bad.

In the UK, though, Labour hasn’t taken a strong stand against Brexit. Instead, Corbyn, long a Euroskeptic, has vacillated. The left in Britain dislike the financial power given to European technocrats by the EU—financial power that’s been wielded to impose withering austerity on nations like Greece.

Corbyn's campaign against Brexit in 2016 was half-hearted. Since then, he's tried to oppose Tory Brexit plans without opposing Brexit itself. He's argued that a Tory Brexit will be a disaster. But rather than calling for a new referendum, he's suggested that a Labour government could implement Brexit without the downsides of brutal economic hardship—which is almost certainly not true.

Corbyn's proponents say that he's being canny; by refusing to take a clear position on Brexit, he's forcing the Tories to solve the problem themselves. The hope is that the conservatives will be forced to call a new election, and Corbyn will then assume power. At that point he can enact a range of left policies, and do… something or other about Brexit, presumably, if he has to.

The problem with this strategy is that it assumes that politics is about outmaneuvering the Tories, rather than about working for your constituents. Brexit is the biggest issue of the day in Britain, and has been since the referendum. It's the policy most closely associated with the Tories. As the magnitude of the disaster becomes clear, people want someone to fight for them.

Instead, Corbyn’s wishy-washy, like many a Democrat of yore. And that’s hurting him, according to a recent YouGov poll. His approval has cratered to -45. Of people who said they'd gone from liking Corbyn to disliking him, 43 percent cited Brexit as the reason for the switch.

People hate the Tories too, and Corbyn might win the next election. But he's obviously not rallying his voters. And he's not standing in solidarity with immigrants or people of color in the UK, who are desperately looking for someone to take their side.

It's become a shibboleth of left discourse in the US to say that opposition isn't enough; you need a positive program to inspire people. Positive programs are important. But voters also look to the opposition party to oppose.

Bad policies cause real harm, and racist policies like the wall and Brexit tell large segments of the population that the government hates them. People want their representatives to take a stand and push back. The Democrats, for all their failings, have generally managed to do that. Corbyn hasn’t.