The U.K.’s New Prime Minister is the Market’s Choice

Tough decisions? Not for Rishi Sunak. 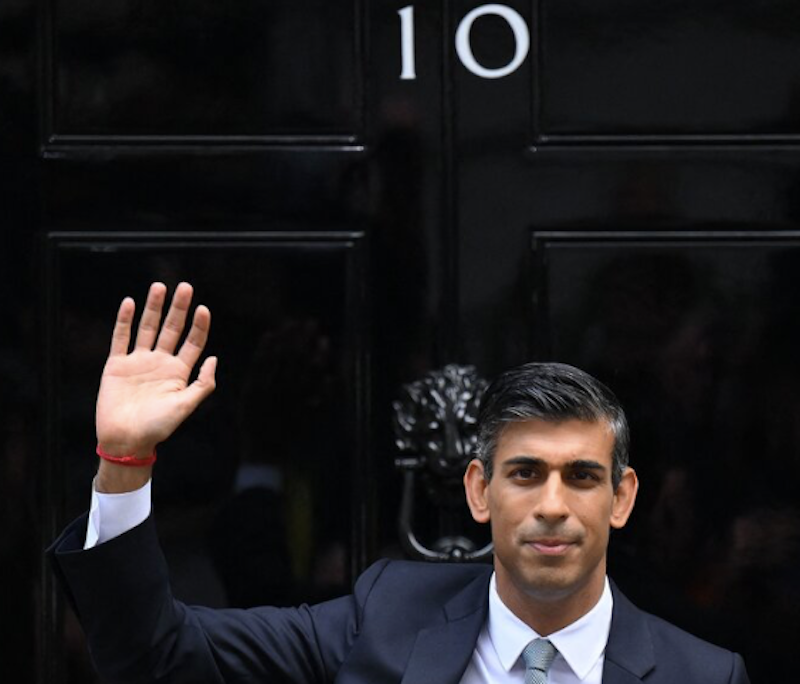 The unprecedented nature of what the UK’s going through right now is illustrated by the number of superlatives we’re forced to use.

So far, in less than six weeks, we’ve had:

—The shortest premiership of any Prime Minister (Liz Truss).

—The shortest tenure of any Chancellor of the Exchequer (Kwasi Kwarteng).

—The shortest tenure of any Home Secretary (Suella Braverman).

—The fastest collapse of a budget.

All of this is taking place in the reign of the oldest King ever to have ascended to the throne. Liz Truss’ cabinet was also the most diverse, with none of the four most senior ministerial positions—prime minister, finance minister, foreign secretary and home secretary—given to a white male.

Kwasi Kwarteng was the first black Chancellor. With the new Prime Minister, Rishi Sunak, we have two more firsts to add. Sunak’s the first Hindu Prime Minister and the first person of Asian origin. He’s also the youngest Prime Minister in modern political history, and the richest, with an estimated fortune of £730 million. He’s the first senior politician included in the Sunday Times’ rich list. He’s also had the most meteoric rise to power, only elected to Parliament in 2015.

One thing that hasn’t changed is the basic makeup of the leading members of the Tory Party. All of the people above went to private schools. They may be ethnically diverse, and there may be more women in the top posts than previously, but they all share a basic class interest. They’re rich, and they’d like to remain rich.

Sunak is seen as a safe pair of hands by the markets. Prior to becoming an MP he was a hedge fund manager and an analyst for Goldman Sachs. He’s promised to cut public spending in what looks to be a return to the austerity years following the financial crash of 2007-2008. Then it was the population paying for the crimes of the banking sector. Now it’ll be the population paying for the incompetence of a previous Tory administration. We’ll also pay for the war in Ukraine, and for increased profits for the oil and gas industry.

Sunak’s first speech on being appointed as Prime Minister of the Tory Party… sorry, of the United Kingdom—a position he took with an even smaller electorate than his predecessor, chosen from a shortlist of one by the grandees of the Tory Party elite—was strange and awkward. It was full of fake smiles and peculiar emphases, as he nodded and twitched his way through all the usual cliches—“party I love,” “country I love,” “honour and privilege”—promising to bring the party and the country together as the only way “to overcome the challenges we face.” The speech lasted less than 90 seconds, and ended with a long, weird pause, as if there was something else he wanted to say, but he couldn’t remember what it was.

The United Kingdom has a very peculiar constitution. It’s a Constitutional Monarchy. Unlike the United States there isn’t a single written document. It’s the accumulation of centuries of tradition, many of which go back to medieval times. Central to this is the Royal Prerogative, which Britain inherited from its pre-democratic past. It was this that the English Civil War was fought for. What this means, in effect, is that the government uses royal powers with the permission of the Crown, which means that, before he can take office, the prospective Prime Minister has to go before the monarch, who then appoints him or her as the person most likely to command the confidence of the House of Commons.

So it was on October 25ththat Rishi Sunak bowed before King Charles III, and accepted his invitation to form a government in his name. After that Sunak made another speech in front of 10 Downing Street, the Prime Minister’s official residence. This was more accomplished and relaxed than the first. He said that the country was facing a profound economic crisis, citing the aftereffects of Covid and “Putin’s war in Ukraine.” He paid tribute to his predecessor but said she’d made mistakes, adding, “I have been elected as leader of my party, and as your Prime Minister, in part, to fix them.” Less than three minutes into his speech and he was already dissembling, given that no election had taken place, his only rival having stood down to allow him a free run at the post. I can’t have been the only one who muttered “not my Prime Minister” when he said those words.

He said he’d place economic stability and confidence at the heart of his agenda, adding “this will mean difficult decisions to come.” It’s worth pausing at this point to try to understand what these words means. By “confidence,” he means the confidence of the markets. He intends to do the markets’ bidding. He comes from the markets. He probably knows all the main players personally, having been in the business for many years before stepping into the political arena. I can’t shake off the feeling that he’s been chosen for this job, and that the reason the markets were so brutal to Liz Truss in the last few weeks is they wanted to get rid of her, knowing that Sunak was the person most likely to take her place. Sunak may have been appointed by the monarch, but he was selected by the markets.

As for the “difficult decisions,” he doesn’t mean he’ll have difficulty making them, nor that they’ll cause any difficulty to him personally. He means it’ll be difficult for the rest of us. He means that he’ll continue the process of privatization of the National Health Service. He means that he intends to bear down on wages and conditions. He means he’ll cut benefits. He means that the ongoing shift of wealth, away from the population as a whole, towards those who control capital, will continue. He means that, given the choice between the needs of the environment, and the demands of the market, he’ll choose the market. It means that austerity is back with a vengeance, and that it’s the poor who’ll be made to pay, as they always are.

After that he promised to deliver on the pledges contained in the 2019 Conservative Party manifesto. Here they are, as he states them, followed by translations of what he means, by me, in brackets:

—“A stronger NHS.” (Continuing moves towards a US style insurance system.)

—“Control of our borders.” (Harsher treatment of asylum seekers.)

—“Protecting our environment.” (As long as it doesn’t cut into profitability.)

I haven’t added brackets to the last pledge as it needs more than a short one-line statement. It’s on this point that we can see exactly how he intends to proceed. “Levelling up” was one of Boris Johnson’s key promises. It arose from the fact that Johnson had won a number of so-called red wall seats at the last election: that is, seats that traditionally supported Labour. Many of these seats are poor, and in neglected parts of the country, in the North and the Midlands. The levelling up agenda was designed to appeal to traditional Labour voters whose loyalty to their new Conservative representatives would be in question otherwise. It was the bone he threw to his red wall dog.

On July 29th, during the last leadership election, Sunak was overheard telling grass roots Tory members in Royal Tunbridge Wells, in Kent, what levelling up meant to him. He said he’d changed the public funding formulas to ensure that more prosperous towns, such as theirs, would receive “the funding they deserve.” He was caught openly boasting that he was deliberately diverting funds from the deprived urban areas in the North, to well-off Tory supporting areas in the South.

Here are his exact words: “I managed to start changing the funding formulas, to make sure areas like this are getting the funding they deserve because we inherited a bunch of formulas from Labour that shoved all the funding into deprived urban areas and that needed to be undone. I started the work of undoing that.”

All those solemn commitments he made, addressing the British nation through the lens of a camera in front of the door at 10 Downing Street, while affecting an air of studied sincerity, were entirely disingenuous. There’s one other phrase he uses which tells you where we’re going as a nation under Sunak’s leadership. With reference to the war in Ukraine he says: “In the midst of a terrible war that must be seen successfully to its conclusions.”

What does that mean? What conclusions is he referring to? He’s not referring to the same conclusions that Putin would want. It’s also obvious that he doesn’t mean a peace agreement, since neither Britain nor the United States are in peace talks with Russia. He can only mean the defeat of Russia, at whatever the cost in terms of human life and damage to the economy and the environment.