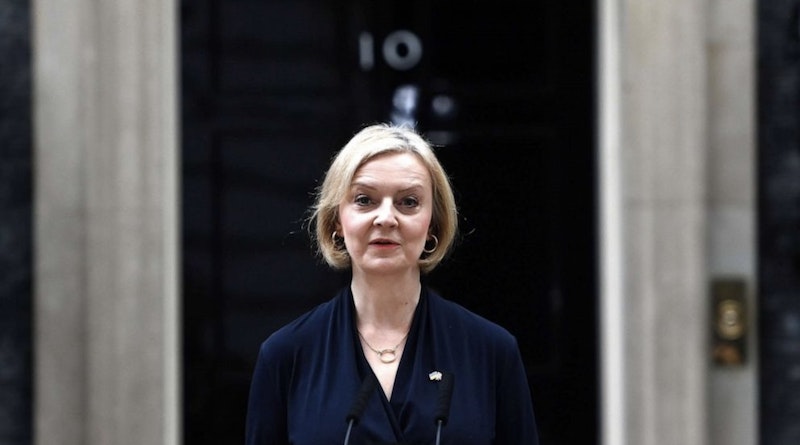 Britain’s having a very public nervous breakdown. It’s happening in the full glare of the media, with the whole world watching.We’ve had three Prime Ministers in as many years. The last one was so incompetent, so unfit for office, that she only lasted six weeks. The one before that was a serial liar. The one before that was so wooden that she’d make a marionette look animated.

Liz Truss was elected by 0.002 percent of the population, in an election that wasn’t overseen by any independent observer. The electorate consisted of the self-serving power-elite known as the Tory Party, whose average age is somewhere between 57 and 72, and whose main purpose has always been to make sure that they come out on top in any economic shakedown.

They’re overwhelmingly white, wealthy, middle-aged and middle class. Their favorite newspaper is the Daily Mail, a worldwide purveyor of celebrity gossip. They’d describe themselves as patriotic, but their patriotism only ever extends as far as flags and symbols. They actively dislike the rest of the population, who don’t share their values.

Just after Truss took power, the ruling monarch died, replaced by her son, a grumpy old man who’s never done a proper day’s work in his life. He’s spent his entire life waiting for this moment. That has been his purpose in life: waiting for his mother to die so that he could assume his destiny. At 73 years and 298 days, he’s the oldest monarch ever to have ascended to the throne in the United Kingdom.

This is fitting. The United Kingdom’s a geriatric state which has spent the last 40 years mortgaging its children’s future for the sake a few pennies off the basic rate of income tax. It has sold off its infrastructure and its industry. It has undermined its workers. It has enriched the few at the expense of the many. Living standards are in decline. Poverty’s on the rise. Our transport system is falling apart, our roads are full of potholes, our rivers and seas are polluted, our housing stock is dilapidated, our NHS is in tatters, our social care system is collapsing in front of our eyes.

Truss’ solution was to cut taxes for the rich. In the so-called mini-budget of September 23rd, her chancellor at the time, Kwasi Kwarteng, announced plans to cut the highest rate of income tax from 45-40 percent for those earning more than £150,000 a year. He also announced a cut in corporation tax, a cut in the rate of tax paid on shareholder’s dividends, plus the abolition of the cap on banker’s bonuses.

The aim, they said, was growth. Letting the rich get even richer as an aid to stimulating the economy is one of the principle dogmas of trickle-down theory, which takes the capitalists at their word when they describe themselves as “wealth creators.” They’re not wealth creators, they are wealth extractors. Trickle-down is a fallacy. A more accurate name would be “Hoover-up.” It works by reversing the flow of wealth distribution: extracting money from the poor to give to the rich. When the rich have money, they hold on to it. When the poor have it they spend it. Forty years of upending the post war consensus, which saw living standards rise across the board, has left Britain a poorer, sadder, uglier place.

To pay for the mini-budget, Truss promised to borrow more. That sent the markets into a feeding frenzy: not the promise to give more wealth to the wealthy, but the fact that she was going to borrow to pay for it. There was a run on government bonds, which meant that the price dropped by 24 percent in less than a week. The Bank of England was forced to intervene, buying up bonds in order to stabilize their value. Interest rates soared, pension funds panicked, the economy went into swift and catastrophic decline, while the value of the pound dropped to an all-time low.

What this shows is that even the markets didn’t buy into the fantasy of trickle-down economics. Handing money to a few wealthy individuals doesn’t help anyone but the individuals concerned. Borrowing to pay for it only makes it worse. As interest rates rose, the cost of borrowing increased, making the strategy even more absurd and untenable.

As an aside, I’d like to point out that the term “the markets” is a misnomer. It suggests the presence of an objective force in the world which moves the economy hither and thither according to some inviolable laws of nature. According to Wikipedia: “A market is the process by which the prices of goods and services are established.” What this viewpoint fails to acknowledge is that the markets consist of individuals organizing themselves for their own advantage. These individuals are invariably people with money. In other words, what we call “the markets” are rich people tilting the economy to serve their private needs. In the case of Truss’ mini-budget it’s obvious it was to their advantage to tank the British economy in order to profit from the chaos.

Kwarteng was sacked on October 14th for implementing the policies that Truss had agreed to, and Suella Braverman, the home secretary, resigned on the 19th, citing discontent at the reversal of policies. Both were the shortest reigning secretaries of state in their respective departments of any government in British history. We’re moving into an era of extremes. The oldest King, the shortest tenure, the stupidest Prime Minister, the worst economy, the lowest value of the pound.

There were also scuffles in the lobby during a vote on fracking in the House of Commons on October 19th, when Tory MPs were seen to be “physically manhandled” into the government voting lobby. Labour MP Chris Bryant told the BBC that he saw a whole swath of MPs effectively pushing one member straight through the door. “I have never seen scenes like that,” he said. “All of this is happening because there is complete chaos in government." He added that there were Tory MPs crying on his shoulder.

Meanwhile the Daily Star was showing an image of a lettuce to illustrate Truss’ tenuous hold on power. “Will Liz Truss outlast this lettuce?” the newspaper asked, while showing a live feed of a lettuce in a wig which attracted worldwide attention. The latest image shows the lettuce celebrating with a Gregg’s pasty while the national anthem plays in the background.

The result of all this is that Truss was forced to resign, leading to yet another leadership contest in the Tory party. There’s even been talk of Boris Johnson returning. I’m not sure what this looks like to the rest of the world, but here in Britain it feels like we’re in the middle of a massive nervous breakdown. I’ve never seen anyone have a nervous breakdown, but had one described to me. It was many years ago, when I worked in a factory. Someone told me that the person working on the machine next door to me had had a nervous breakdown. Apparently this person had run out of the door screaming uncontrollably and pulling their hair out.

“Nervous breakdown” is a non-medical term. It doesn’t refer to any specific illness. Rather it’s a graphic term used to describe the effects of stress, when someone’s life becomes so unbearable they can no longer cope, which can lead to bizarre behavior and occasional self-harm. I think that sums up the state of mind in the British nation right now.

Another term for a breakdown might be a breakthrough. When a person’s psychic structures are untenable, when their view of themselves is unrealistic, when they’re suffering from cognitive dissonance, having lived according to false principles, when they’ve been lied to all their lives so they no longer know what’s real and what’s not, perhaps then the only solution is to have a breakdown and start all over again.