Liz Truss has a very awkward and weird speaking style. 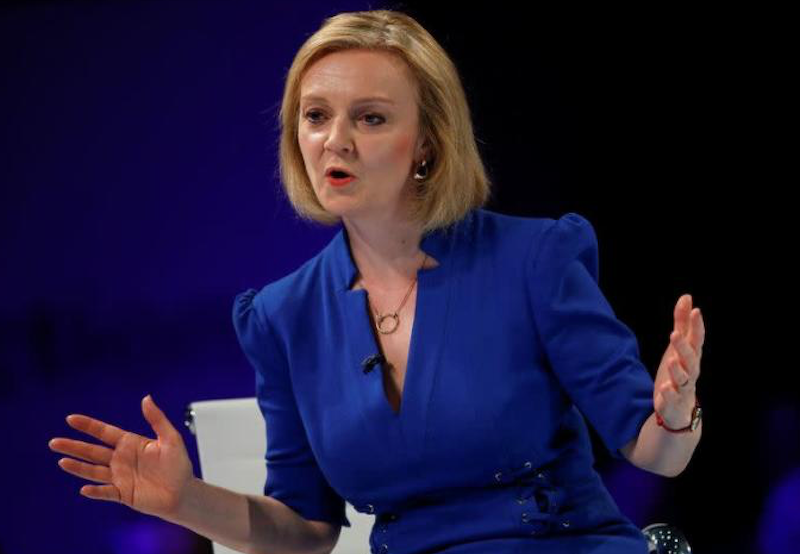 The UK has a new Prime Minister, Liz Truss. She’s someone who’s shifted her views many times in her life. She was a Liberal Democrat, but then became a Conservative. She once called for the abolition of the Monarchy, but now supports it. She was a supporter of Britain remaining in the EU, but now backs Brexit.

She’s had a number of roles in government since being elected in 2010, serving under all three of the previous Conservative Prime Minsters: most recently as the Foreign Secretary under Boris Johnson. Despite being a strong supporter of Johnson, she now says she wants to reverse a number of his key policies. In February, just before the Russian invasion of Ukraine, she referred to the Baltic nations of Estonia, Latvia and Lithuania as being “across the Black Sea,” and said she’d never recognize Russian sovereignty over Rostov and Voronezh, two regions in Russia.

Truss has a very awkward and weird speaking style, evidenced by this piece of film, but will no doubt undergo a transformation under the guidance of her advisors and trainers in the next few months, as she settles into her new role. She’s already been practising lowering the pitch of her voice, in emulation of her model, Margaret Thatcher. Her main policy promise is that she’ll lower taxes to stimulate growth. This is a perennial Conservative promise. Tax cuts, of course, favor the rich. If you’re so poor that you lie below the tax threshold, then lower taxes won’t make any difference. Truss says that she considers it fair to give more money to the wealthy.

"Of course, there are some people who don't pay tax at all," she said. "But to look at everything through the lens of redistribution I believe is wrong because what I'm about is about growing the economy and growing the economy benefits everybody." Growth in the UK currently stands at less than one percent, while her reforms, she says, will stimulate the economy, increasing that growth level to 2.5 percent.

The idea that growth is a necessity is a mainstay of economic thinking. According to conventional wisdom, growth is an increase of wealth driven by an increase in the quantity or quality of goods and services on offer to the consumer. What this usually means is an increase in productivity, that is, making less workers do more work to produce more goods for less money. Growth is usually paid for by the workers, while the benefits tend to go to the shareholders. This is redistribution, but in the reverse direction, from the poor to the rich.

Liz Truss’ ascension to the Tory Party leadership, and the highest office in government, isn’t the only news coming out of Britain at the moment. We’re also in the midst of a cost of living crisis, brought about by increasing fuel costs, while, at the same time, there’s been a wave of strikes, initially lead by railway workers, but quickly followed by barristers, refuse workers, postal workers, telecommunications workers and port workers, with teachers, doctors, nurses and firefighters also threatening industrial action. There’s talk of a general strike, something we haven’t seen in the UK since 1926.

The unexpected spokesman for all this is Mick Lynch, head of the RMT union, who’s been a ubiquitous figure on our screens since the strikes began in June this year. He has an amused, detached, unflappable approach to interviews, which usually means that he comes out on top, with broadcasters ending up looking foolish when they ask ridiculous questions. One example was when one well known TV anchor asked if he was a Marxist. The look on Lynch’s face is a picture. “Richard, you do come up with the most remarkable twaddle,” he says, smiling broadly in wry disbelief. In a response to another question about the effect of strike action on the general public, he said, “What is the answer? Do we pray, or play tiddlywinks, or have a sponsored silence? What is there for working people to do if they’re not organised?” Despite the inconvenience of the strikes, a recent poll found that only 18 percent of people opposed them.

In a speech to his members at King’s Cross station Lynch said a few words that have become the rallying cry for many people: “Profit has never been higher. We’ve never had so many billionaires in this society. The super rich are getting richer and richer, year after year, but workers are getting poorer year on year. And what do we say? We refuse to be poor anymore.”

That’s the phrase that is echoing around Britain right now: “We refuse to be poor anymore.” This concern for redistribution is echoed by Labour MP Barry Gardiner: “What we see in the country at the moment, all this talk... about growth. No it’s not about growth. It’s about distribution. It’s about making sure that people are treated fairly, that they’re treated equally, and at the moment they’re not.”

Growth is necessary only as long as we have a parasite class extracting wealth for themselves and taking it out of circulation. This is why redistribution matters. If you give workers a pay rise they’ll spend it. They will buy a new settee, or treats for the kids. They’ll go out for a meal or take a holiday. They’ll invest in a new kitchen. The money will go round and round, stimulating the economy, creating more work, and more jobs. Everyone will be happier. If you give tax cuts to the rich, on the other hand, they’ll squirrel it away off-shore, where it will sit quietly in a bank account and do nothing. There’s only so many yachts a billionaire can buy, while the need for goods and services by the general population is unending.

Liz Truss has just been voted in as Prime Minister by the only group that matters to her: the Tory Party. She received 81,326 votes. More than 40 million people are registered to vote in the UK, which means that Truss has been elected to lead this country by 0.00203315% of the electorate.

Who says we live in a democracy?