The Torture of Tommy Robinson

He’s not dead yet, which has to disappoint many powerful people in the U.K. 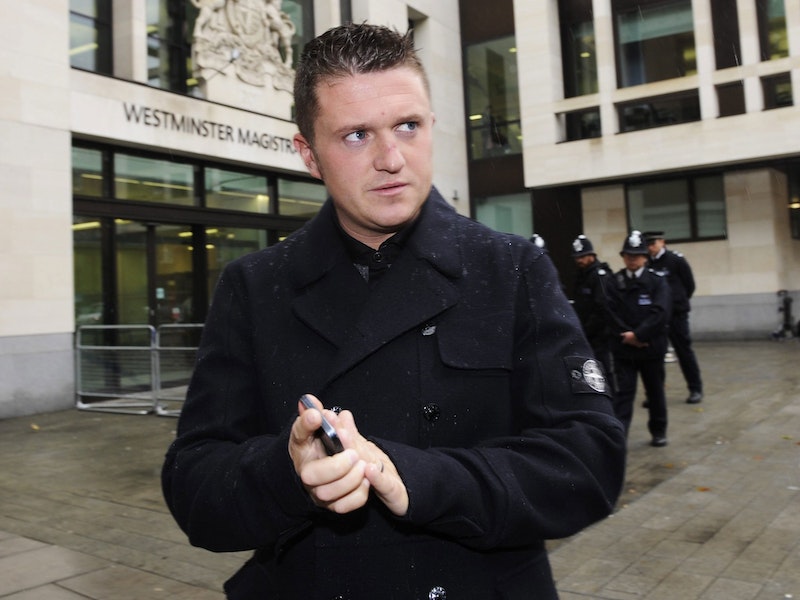 British anti-Islamism crusader Tommy Robinson was arrested in May for allegedly breaching the peace outside a courthouse during a trial of several members of a grooming gang who were charged with raping underage girls. The trial was under reporting restrictions to protect the verdict from media influence. Robinson was there reporting on it, but credibly claims he did nothing that could compromise the trial’s outcome. This was his second arrest for such an offense.

The police briefly detained Robinson, and then charged him with contempt of court. Refused multiple requests to see his own lawyer, he had to make do with a public defender who couldn’t tell him what he’d said to be charged with this crime. In the approximately 10 minutes he spent in court, the judge didn’t tell Robinson this either, nor did he ask him any questions. He sentenced Robinson to 13 months in prison.

The U.K. media, which didn’t bother to obtain a transcript of the court proceedings, reported that Robinson pleaded guilty, which he didn’t, nor did he get any sort of trial before being remanded to HM Prison Hull, which is seven percent Muslim. For his own protection, prison authorities put him in the hospital section. The prison staff treated him well, and he had a TV and access to a gym. As someone charged with a civil offense held in a facility for criminals, Robinson was supposed to be able to spend £50 per week in the canteen, but was only allowed the normal prison amount of £12. This wasn’t a major problem, however, because he could eat in the cafeteria, where he could see that he was being served the same food as other prisoners and know he wasn’t being poisoned.

It was a situation Robinson thought he could live with, but it didn’t last long. One day, before he’d ever been able to meet with his lawyers for the first time since his arrest (he had an appointment with them that was booked) his jailers told him he was moving, though they wouldn’t tell him where. It turned out to be HM Prison Onley, a violent hellhole with a 30 percent Muslim population. When he got there, the warden couldn’t tell him why he’d been sent there, probably because top prison authorities didn’t explain that it was a punitive measure. When Robinson expressed his fear that the Muslim gangs would try to kill him, the warden laughably told him he’d be safe because he’d been remanded there under his legal name, Stephen Yaxley-Lennon. The Muslim gangs know that name as well as they know Robinson’s face.

The warden also told Robinson he needed to voluntarily “self-isolate” for his own safety, which he refused to do, knowing the psychological toll that a previous solitary confinement after a conviction for mortgage fraud had taken. Robinson said he’d go in the general prison population, but the warden knew this would mean certain death and replied that he was going to put him on The Block, the place prison offenders are sent to for punishment. The Block’s cells have only a blue mat in them, instead of the normal mattress, and no TV. Robinson’s days were to be spent sitting on that mat, listening to Muslim prisoners shout abuse at him.

After Robinson’s first night as a non-criminal prisoner in a basement shithole designed to punish murderers and rapists who’d misbehaved, he was given his first daily “exercise” period, which involved locking him up in a small cage inside the building where a hundred or so prisoners screamed threats at him and his family members. Out of rage and frustration, Robinson finally told them, “Islam is a cancer, and I’m the cure,” for which he got arrested for the crime of religious hatred.

Confined to his cell, Robinson could no longer verify that the food he received wasn’t poisoned. After his first meal arrived, a bunch of prisoners called out to him, laughingly asking if he’d enjoyed it. But fearing poisoning, he hadn’t taken a bite. Robinson’s only food source was the canteen, but being limited to £12 per week meant he had to get by on a can of tuna per day and some fruit. And because the canteen process takes a week to fulfill, Robinson had to go without any food for seven days.

Robinson was eventually able to get moved out of The Block, but not before he was forced to sign a statement that he’d only be allowed out of his cell for an hour per day, which would mean a shower in The Block and then back inside the cage to be abused by angry Muslims. Robinson’s new cell was located such that whenever prisoners went to the area of the prison used as a mosque, they’d pass his cell. They spat at him, threatened him, and threw feces into his cell. Still, Robinson didn’t ask to be moved to another cell because he’d been informed that any move would be back to The Block.

Sure that he wouldn’t come out of HM Prison Onley in anything but a body bag, Robinson wrote letters to his wife and children. He had a lot of things he wanted them to know while he was still alive. Later he’d find that prison authorities refused to send the letters, out of fear that they’d end up online. One night, three prison staff members came in his cell and asked him where his wife was, which Robinson couldn’t know since he hadn’t been allowed to call her. They told him that there was intel that she was going to be attacked with acid, and then left him alone. Robinson wasn’t able to sleep for a week. The police visited his wife at home and gave her a pamphlet on what to do if you get acid thrown in your face, and then did the same with Robinson’s mother. Both women were advised that they should be cautious, but told they could not break the law in defending themselves.

After applying for “enhanced” status so he could spend more at the canteen, prison officials told Robinson he’d first need to exhibit good behavior. But the Catch-22 was that, since he was only allowed out of his cell to be abused in the cage daily, no evaluation of his behavior was possible. When his lawyers requested that their client be moved back to Hull, prison officials responded in writing that imprisoning him in a place that matches his racial prejudice would be immoral and illegal. This is ironic, given their own immorality in moving him from Hull to Onley to be treated like a convicted murderer who’d shivved a fellow prisoner. Actually worse—the murderer would eat better.

In August, after losing 40 pounds, Robinson was freed after the court of appeals ordered that he should be retried on the contempt of court charge. Two and a half months of solitary confinement with only survival-level nutrition and a daily Thunderdome treatment is apparently not sufficient punishment under British law for the crime of standing outside of a courtroom and talking into an iPhone about a trial.

The above account of Tommy Robinson’s arrest and subsequent torture comes directly from what he told The Rebel’s Ezra Levant in an interview released on September 12. Many will say you can’t trust the word of a convict and former leader of the English Defense League, but he’s got plenty of documentation as evidence. Moreover, if you watch this interview objectively, you can see a damaged person who’s telling the truth. His words are much more reliable than anything you’ll read about him in the British media, which will be happy when he’s finally murdered, as will much of the U.K.

It’s clear that people in the highest political circles want Robinson dead, and that the media will do nothing to prevent it. When the Daily Mail obtained his letters begging for food, some social interaction and a TV set, it mocked his handwriting, saying that an expert had determined that it showed he was insecure person with low self-esteem. Amnesty International’s not interested in the case either.

This Kafkaesque story paints a disturbing picture of the U.K. as a place where you can be thrown in solitary confinement and deprived of food without being able to talk to your lawyer or even having a trial. If an animal had been treated like Robinson was in prison, the ASPCA, and much of the U.K. for that matter, would’ve been up in arms.

On September 27, Robinson will go to London’s Old Bailey, where the nation’s worst criminals are tried. He’s worried he’ll be offered a deal to plead guilty in exchange for his freedom. That’d be best for his family and his mental and physical health, but I’d be surprised if he took it—he’s obviously willing to die. Most likely, Robinson will be back behind bars soon, and then it’ll just be a matter of where the vindictive, conscience-free prison officials decide to put him. If it’s back in solitary confinement, the U.K. will have disgraced itself again, and not one MP will say a word.