And I passed out. 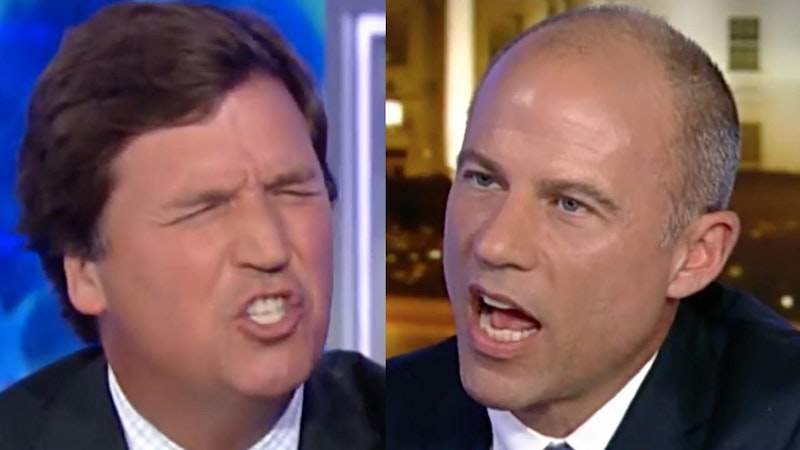 Michael Avenatti: Tucker, let me in no way make the necessary point. Let me speak in a light-timbred but insistent voice protesting everything you say without ever making clear the reason you’re full of it. Let me be very careful not to point out that I’m Stormy Daniels’ lawyer and you’re asking a question for her personal manager. Tucker, really, I don’t want us being coherent. If I say that I provide Ms. Daniels with legal expertise in a court case, and that this job entails no involvement either in her choice of profession or her choice of venue for performance of said profession, I risk showing you up as an idiot operating from a 10-year-old’s concept of grown-up business dealings. Viewers will experience this TV show as a live-action version of Saturday morning programming skewed for, uh, elementary. People in elementary and junior high.

Tucker Carlson (bouncing in his seat): I know she’s working in a strip club in Richmond!

Michael Avenatti: Let’s spend the last three minutes of a 13-minute and 26-second segment talking about whether I have full responsibility for the fate of Stormy Daniels because she hired me for a court case. That makes sense.

Tucker Carlson: I feel sorry for her!

Michael Avenatti: Do you ever get the feeling everyone is stupid?

I say to Michael Avenatti that I kind of think we are. This is after seeing Tucker Carlson, that shoe-haired divot of a human being, do bad things to Avenatti on Carlson’s TV show. I bet Carlson had his mike louder.

Really, the whole thing was a drag. Like this: Squealer from Animal Farm got to bounce about, and a lawyer played straight man. Avenatti leaned in and made his points, but who cares. The other guy’s mike made more noise.

What about Amazon Prime? One is still startled by Ringo Starr and the uncertainty the young Beatle shows when being interviewed. Sometimes the fellows didn’t have much to say, but a microphone was in their face. The Long and Winding Road, that extensive documentary, scrapes up so much footage that you see Ringo huddling into himself after he tells some broadcaster a joke that doesn’t come off. For those who are small enough, this is video evidence that the world fits after all. Being great isn’t a full-time job. No matter who you are, times occur when you just have to get by.