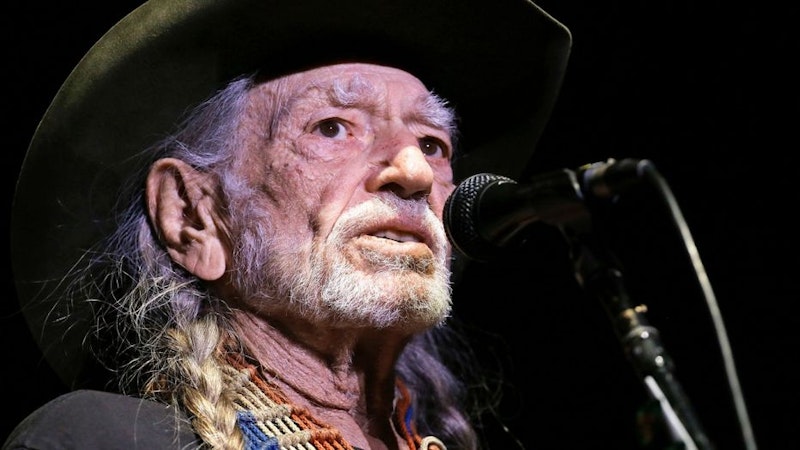 Country music is white music. In endorsing Beto O'Rourke for Senate in Texas, though, Willie Nelson shows that it doesn't have to be.

Not all country performers are white—they aren't, like Ray Charles and Charley Pride. Country wasn’t invented by white people. Country has strong roots in blues and jazz. Early record company executives separated race records and hillbilly music as a marketing convenience based on racism, not because there was some firm stylistic divide between rural white and black music in the 1920s.

But while country isn't historically or consistently white, it’s iconically white. It's music that stands for the American heartland voter and the white working class. Music scholar Geoff Mann argues that country's vision of a nostalgic, rural, idealized American past calls to listeners "whose whiteness is produced and reproduced by what they hear." Country, with its paeans to family, good times, Americana, small towns, and cowboy independence, is part of a fantasy in which white people are wholesome and center stage. Country musicians who undermine that fantasy, like the Dixie Chicks, do so at their peril.

Nonetheless, some artists are willing to risk it. Willie Nelson, who has long embraced liberal causes like marijuana legalization and animal rights, recently endorsed Beto O'Rourke. Nelson performed on stage with the candidate, who used to play in a punk band.

This was Nelson's first rally on behalf of a politician, and some fans were pissed. "I am no longer willing to watch that hippie guitarist who supports that damn socialist running for Senate," one declared. "Just cause you can write a song, sing a song, play a guitar and smoke weed—doesn’t mean you know what’s right for this state!!! Entertainers should stay out of politics & stick to entertaining," another declared.

Nelson's sin wasn't getting into politics; it was being on the wrong side, and violating country music's implicit connection to the forces of white reaction and conservatism. The Republican Party, embracing its white identity under Trump, calls for law and order and policing the borders of America. Nelson, as a country singer, was expected to stand for that America of pick-up trucks and Confederate flags. Instead, he endorsed O'Rourke, who’s relying on Latinx votes and has spoken out eloquently in favor of the Black Lives Matter NFL protests.

What angry fans are missing is that Nelson has long pointed towards a different, less white, more inclusive vision of country music, and for that matter of the country. Nelson's most direct effort to imagine a country music for the marginalized is his short 1973 song "The Troublemaker." The song starts describing a dirty hippie from the perspective of a skeptical conservative.

He's rejected the establishment completely
I know for sure he's never held a job
He just goes from town to town, stirring up the young folks
'Til they're nothing but a disrespectful mob

The twist is that the troublemaker isn't any hippie; he's Christ. Nelson sings the last lines of the song in his usual languid style, softening his soft voice even further until it's half a whisper. "Friday they will take him to a place called Calvary/and hang that troublemaker to a cross."

Nelson is asking his listeners to rethink their identification. The song starts out catering to a right-wing country music fan, who sees America as virtuous, and Vietnam protestors and young people as outsiders and losers. ("I know for sure he's never joined the army/And served his country like we all have done"). But by the end, those same fans are asked to see Jesus as one of those protestors and non-conformists—and as one of those prisoners and criminals. Rather than identifying with the white establishment, Nelson says, you could identify as one of the working class, and even as part of the proletariat—people who are cast out, despised, arrested, harassed and hassled. Jesus was a troublemaker who’d kneel to protest during the National Anthem. Kneel with him.

The country tradition of kneeling with outcasts and the dispossessed isn't the sole property of Nelson. The father of country music, Jimmie Rodgers, sang about being hassled by police on a song with Louis Armstrong playing trumpet. Johnny Cash famously performed anti-prison songs in San Quentin. And the Dixie Chicks spoke out against the Iraq War, torpedoing their careers.

But Rodgers, Cash, and the Dixie Chicks represent a minority strand in current country. That's why some of Nelson's fans reacted with such confusion and anger when they heard he'd be taking the stage for O’Rourke—and implicitly against Trump. Whiteness needs country. But country music doesn't need whiteness. It can stand with the troublemakers instead.