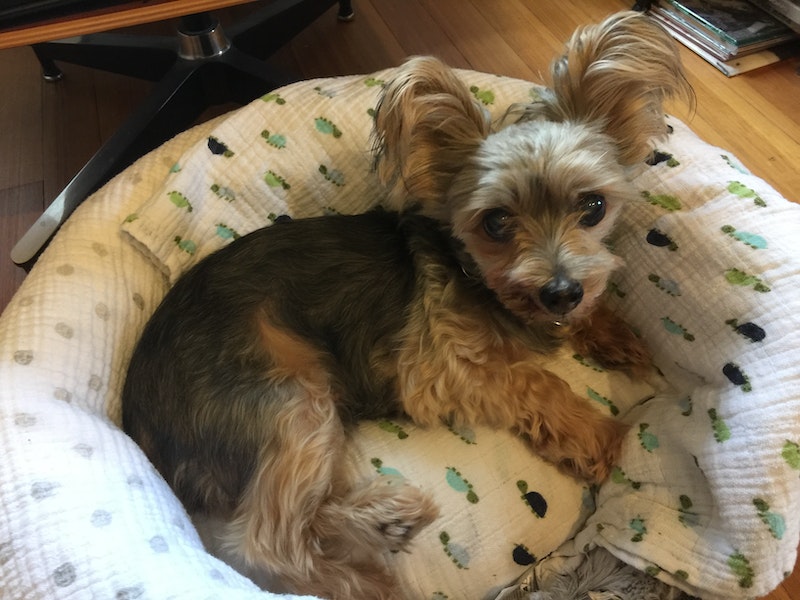 In the increasingly rarefied world of mainstream journalism, there’s little doubt that the biggest event of 2018 is The New York Times’ breathless publication of an op-ed by Anonymous, allegedly a “senior official in the Trump administration,” whose identity we’re told had to be kept secret to preserve his or her job. Taken at face value, which I don’t, the first logical question is why an outspoken critic of Trump would remain in his employ. Unless you’re swayed by the writer’s supposed patriotism—which could be expressed far more effectively by resigning, naming names and citing very specific incidents of Trump’s often moronic behavior—the more cynical view is that the “official” is foolishly sacrificing a huge payday by playing ball with the Times.

(It’s a cynical cycle in media now—when more and more people don’t read articles, but just scan headlines and look at the pictures, which is why above is a snapshot of our family dog Celery—and whether that changes in the near future is up in the air, but I don’t suspect so.)

This is why, upon reading the essay last week, I immediately made a bet with my two sons (they gave me four-to-one odds) that Anonymous is a “senior editorial board member [or columnist] for The New York Times.” I don’t understand why this wasn’t a more common view, as people on Twitter, and to a lesser extent, Facebook, immediately speculated on the identity of the whistle-blower, with, incredibly, Mike Pence the leading suspect. (Which is just dumb, since Pence covets the presidency, and wouldn’t risk exposure as a disloyal MAGA Man to Trump’s base.) Others named various familiar figures, like Dan Coats, Jon Huntsman or Kellyanne Conway, again not questioning the Times’ line.

But why would anyone take the Times—or any other relatively large news organization at its word in today’s climate of newspaper desperation, layoffs, and financial despair? As I’ll explain further down, the op-ed has widely-reviled Times columnist David Brooks’ fingerprints all over it, but first think about what an extraordinary marketing coup this was—and still is—for an institution that at one time, with a straight face, was called “the newspaper of record”?

It’s possible that the Times has finally, after three years of covering Trump as if he were a conventional politician, even while lambasting him, wised up to the fact that the best way to voice their opposition to the man is to play by his rules. Which means: no rules. And if that’s the case—perhaps I’m giving executive editor Dean Baquet, editorial page editor James Bennet and publisher A.G. Sulzberger too much credit—it’s about time. I’ve written on several occasions that the press ought to stop analyzing Trump’s haphazard tweets as if they’re news rather than an unreliable barometer of what his administration is really implementing and planning. And though money is scarce, hence the emphasis on opinion/lecturing instead of real reporting, surely the Times and the Bezos-funded Washington Post still have the resources to produce stories that don’t rely solely on anonymous sources.

When I questioned, on Twitter, whether or not Anonymous was a Times employee, one writer, my Splice Today colleague Noah Berlatsky—who claims the Times op-ed section is a right-wing bulwark—wondered how I could be so naïve to question the veracity of the revenue-in-reverse Times. In a Baby Boomer tic, I replied with a famous Godfather line, “Who’s being naïve now, Noah?”

Today, nothing’s out of bounds, no stunt is too crazy, because the entire industry/Beltway culture is crazy. One of my sons said that if I were right, and it was revealed the Times perpetrated a hoax, the paper would be subject to lawsuits and probably go out of business. Baloney: just as with Judith Miller and Jayson Blair, there would be several top officials at the paper fired, an internal investigation conducted, and then back to the races! The sacrifice of Baquet or Bennet would be a small price to pay. Sulzberger, of course, would be spared.

After the sensationalism of the op-ed continued—said to be most read Times column this year—the paper’s op-ed editor, James Dao, took questions from readers. When asked how the story came about, Dao said, “The writer was introduced to us by an intermediary whom we know and trust.” That’s vague.

I mentioned David Brooks (who called the op-ed a “stupid act” by the alleged official on TV last week) above as a candidate for the in-house writer—although it could’ve been one of many at the paper—because the following snippets read like his columns:

• “President Trump is facing a test to his presidency unlike faced by a modern American leader.” (I guess JFK’s challenge with the Cuban Missile Crisis in 1962 is no longer considered “modern,” but George W. Bush’s “test” after 9/11 certainly is.)

• “Don’t get me wrong. There are bright spots that the near-ceaseless negative coverage of the administration fails to capture: effective deregulation, historic tax reform, a more robust military and more.” (That fits in with the Brooks’ neocon background.)

• “It may be cold comfort in this chaotic era, but Americans should know that there adults in the room. We fully recognize what is happening. And we are trying to do what’s right even when Donald Trump won’t.” (The phrase “adults in the room” is now a standard Beltway writer’s cliché.)

• “Senator John McCain put it best in his farewell letter. All Americans should heed his words and break free from the tribalism trap, with the high aim of uniting through our shared values and love of this great nation.” Brooks, back in 2000, was a charter member of McCain’s Straight Talk Express, and like his old boss William Kristol at The Weekly Standard, has never missed an opportunity to exaggerate the political integrity of the late Arizona senator.

It’s certainly possible that the Times was on the level, and did conspire with a Trump official, no matter how high- or low-ranking. But it’s equally likely that the Times, in a combination of attention-seeking, propaganda and a dash of patriotism, cooked up the prank to cause a ruckus. If that’s so, although I don’t care for the Times’ overall liberal slant, it’s refreshing to see at least one media outlet that’s finally understood how to do battle with this very strange president.