The Tone-Deaf of All Parties

And you people complain about libertarians? 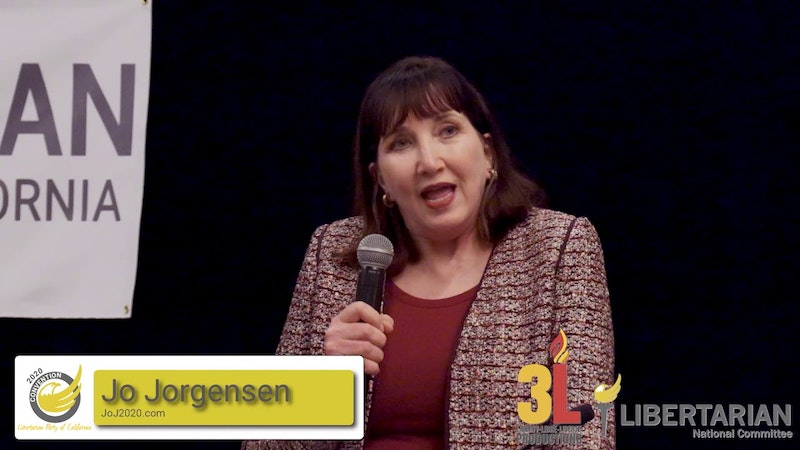 These days, with attention spans and political fuses short, you can never assume your listener is generous enough to put a positive spin on what you said, as supportive friends would.

That makes it all the more amazing that some political figures don’t try very hard to sound polite. Overall, I’m grateful when they just let it all hang out, so we have a slightly better idea where they stand. But sometimes even when you know exactly what they were thinking, you’re still left wondering, well, what they were thinking.

As a libertarian, I’m pleased to see the 2020 Libertarian Party presidential/vice-presidential ticket is a balance of mainstream and openly anarchist, namely Jo Jorgensen and Spike Cohen, respectively, chosen via online political convention this past weekend.

I’d love few things more than to have a real anarcho-capitalist (someone who, like me, wants all government abolished but property rights respected) walking around the White House or Vice Presidential residence for a short time before government ceases to exist. On the other hand, given how quick people are to declare us anarchists nuts, I also recognize it might behoove Cohen to replace his absurdist platform (which as of this writing resides on the site of parody candidate Vermin Supreme, with whom Cohen had initially hoped to run) with a real platform, preferably not including mandatory toothbrushing or the replacement of the Supreme Court with janitors.

(That sort of humor has a noble history of buttressing anarchist sentiments since the 1960s, by the way—from the situationists and later Devo to the Church of the Sub-Genius—but maybe it’s finally redundant in our era of memes and constant nonsensical remixes.)

Rep. Justin Amash, who went from Republican to Independent to Libertarian recently, declined in the end to run for the Libertarian Party presidential nomination, which might at least have brought some built-in attention. Similarly, Jesse Ventura (veteran of the Reform Party) opted against the Green Party run he reportedly briefly considered, though like so many minor-party participants, he still got to experience a few weeks of Twitter users complaining about him, half saying he was helping to reelect Trump, the other half saying he was helping to elect Biden. These things can’t both be true, you know, and maybe they shouldn’t matter.

I strive not to put too much weight on the ethnicity or sex of a candidate (or anyone), but again, in a world determined to spin what you say in the worst direction possible, it’s good to have some cover in that area sometimes.

After a few weeks of clumsy comments about women and black people (which I don’t take as proof he dislikes either demographic, to be clear), Biden must be looking forward to naming someone as his running mate who checks at least one, possibly two of those boxes. Gov. Gretchen Whitmer of Michigan checks one and is seen as a hero by some for being especially draconian in her coronavirus lockdown orders—with the shameless media obligingly calling her critics neo-Nazis for using swastikas on their anti-Whitmer protest signs, though the swastikas were obviously meant to call her fascistic, not urge her to be more fascistic. The media, too, are tin-eared, or pretend to be when it’s strategically useful.

Whitmer, like California’s Sen. Kamala Harris (who would check two boxes if picked as v.p.), would also make it easy for the Dems to look “tough” and thus non-liberal enough to win over some moderates—though without being in any useful way conservative or libertarian. Those dopes in the centrist swing states love “tough” politicians. “Quarantine!” is becoming the new “Build the Wall!” for some people who crave a strong hand in government. It’s fair for a freedom-lover to be nervous about both slogans and mindsets—pending analysis of complex statistics on both issues, etc., etc.

Harris recently introduced a House resolution condemning “anti-Asian sentiment as related to COVID-19,” including use of the phrase “Wuhan Virus” and “all manifestations or expressions of racism, xenophobia, discrimination, anti-Asian sentiment, scapegoating, and ethnic or religious intolerance,” so she certainly tries, not always successfully, to sound like she’s out to avoid anyone feeling slighted. She might still put them in prison, but she’ll be careful what she says while she’s at it—and condemn you if you aren’t.

I’ve noted at least one “libertarian” publicly committing in advance to vote for the Democratic ticket (to punish Trump) even though Harris may well be on that ticket, which strikes me as being as shameful a crash-landing end to one’s former principles as ever I’ve seen.

There will be a fair number of people voting Democrat no-matter-what this year, though, among them columnist Katha Pollitt, who writes in The Nation that she’d vote for Biden even “if he boiled babies and ate them” (she says this by way of dismissing sexual assault allegations against Biden by Tara Reade, whose reliability I don’t pretend to be able to judge).

All the above makes politicians sound to me like a reckless lot, but it doesn’t make sticking with the status quo an obvious choice. The Republican incumbent just told workers at a company created by Henry Ford, “You got good bloodlines,” leaving everyone wondering, likely for the rest of time, whether he meant that like a harmless “Playing billiards is just in my blood, I guess!” or like a creepy “Your founder Henry Ford was right to think we need to screen the population for inferior genetic strains!” Maybe it doesn’t matter. I don’t know anymore.

In short, you want to give everyone the benefit of the doubt, but so few do anything to deserve it.