Dave Rubin and the Appeal of Political Conversions

Dave Rubin is a sidekick, who has a light touch and no "big ideas." 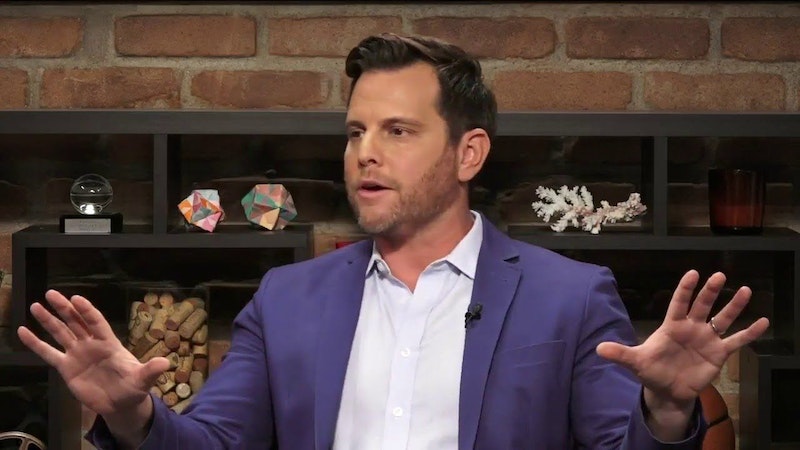 Dave Rubin, a self-proclaimed classical liberal comedian who hosts an interview show called “The Rubin Report,” has developed a massive following that identifies with his devotion as a politically homeless media personality. I used to watch Rubin’s show earlier when he branched out from the Young Turks and this had a substantial impact on my politics. His interviews with Milo Yiannopoulos, Douglas Murray and Ben Shapiro marked the first time I’d been exposed to conservatism in a way that made the conservative philosophy sensible. Rubin’s hands-off approach to interviewing, which often devolves to aggressively ribbing on progressives, has been a frequent source of criticism. Yet these critiques, whatever their legitimacy, aren’t effective in looking at how Rubin thinks. Ultimately, at his core, his message is about political independence. It’s what speaks to his millions of YouTube subscribers and that’s more important to explore.

Rubin’s Don’t Burn This Book immediately became a New York Times bestseller. The book’s a crusade against political correctness; he writes about joining forces with the likes of Jordan Peterson, Shapiro and the Weinstein brothers. Rubin will convey familiar non-progressive platitudes without expanding from the cookie-cutter manner he delivers them in, from rejecting the $15 minimum wage to the earnings gap between men and women and portraying college campuses as havens imbued with false victimhood. It’s in part a travelogue of all the people he met when touring with Peterson, telling him about being self-censored. He complains that comedy is being coddled by people eager to call those “racists” who disagrees, implying an apparent shortage of politically independent people. Sentences that give off this earnest, yet fearful impression like “I was becoming a brave-person proxy for people who felt that they had too much to lose,” are unabashedly written from the perspective of the layman who happens to be in a league of people far specialized in their areas, whether they are in academia, politics or alternative media. That’s also why it’s in part a self-help book on how you can emulate his cerebral stylings, while remaining your own person.

Rubin understands that his struggles are his audience’s struggles. One thing they share with his Intellectual Dark Web cohorts is a rebellion against identity politics through polite conversations. He says the word “journey” nine times throughout the book to give the perception that the people who know more about their stuff than him are on the same side as his readers. Benefitting from these associations, he declares that tribalism should be dead. Despite this, that’s not to say he refrained from attacking his former colleagues at The Young Turks, or anyone working for The New York Times and Vox, both of whom accused him of acting as a gateway to the reactionary Right via YouTube’s algorithms.

Rubin’s success following his departure from progressive center-left circles has led to the common charge that he’s a self-interested grifter, who isn’t really that politically independent. If that implies his change wasn’t genuine, it’d be unfair to say the same for most of his peers, past and present. When Rubin interviewed Thomas Sowell, also commended as one of his heroes in the book, the economist tells him that it’s not unusual for him to move on from his Marxist phase, because other thinkers of his stature—Milton Friedman and Friedrich Hayek—had experienced the same. It’s a common fixture in modern-day conservatism. Think of the beginnings of the American conservative movement in the 1950s, when ex-communists such as James Burnham and Whittaker Chambers wrote about their experiences. Chambers, in his autobiography Witness, explained his distancing from communism after observing the horrors of the Stalin purge, how he and his wife was forced to contemplate abortion by the Party Underground. By the time he broke with the party in 1938, he was afraid of vengeful persecution by the group, still cited as one of the greatest pro-life messages. Burnham and Chambers became two of the first writers for National Review, founded by William F Buckley Jr. in 1955. There, a conservative coalition was made by fusing their traditionalist and libertarian beliefs into a form of anti-communism. It was meaningful, and strategically clever, in merging two schools of thoughts that couldn’t be conceptually more different.

As Tanner Greer in National Review and Michael Knowles in The American Mind notes, the main priority nowadays for center-right discussion is to push back against irritating social justice zealots. They’re found in the confines of Twitter, corporate media and tech companies, awaiting the cancellation of anyone who opposes identity politics or don’t have the belief that their country’s history is inherently flawed. This concern could potentially build a new and young coalition with Intellectual Dark Web cohorts who are interested in that, rather than, for instance, policies like lowering middle-class taxes. This focus is replicated by Rubin: Don’t Burn This Book uses the word “taxes” 25 times (each time he advocates for them to be lowered), compared to the terms “fake news” and “media” mentioned 82 times. For Rubin, fighting back against the cultural power of professional partisans, while sprinkling his own beliefs, would be strong enough to maintain the curious reader’s attention.

Rubin’s isolation from the Left comes out of the reaction that someone who claims they’re tolerant of others aren’t that in practice. He tells the reader he began to distance himself from The Young Turks when Cenk Uygur called David Webb, a black conservative radio broadcaster, an Uncle Tom. (Uygur has a habit of being bombastic and pompous to his opponents, up to the point where Bernie Sanders withdrew his endorsement when he was running for Congress). This demonstrates that liberals, as Josh Barro commented, wouldn’t attract more supporters, purely for the fact that they can be really annoying. Where does this go from there? In the chapter, “Stop Hating (Straight) White Men, America and Western Values,” Rubin defends capitalism and points to people who are heterodox that are either women, minorities or LGBT or claim those people have end up being more successful like Oprah Winfrey and Ellen DeGeneres, so it can’t be simply straight white men in the wrong.

If there was an instinct that justifies Rubin’s shift into elements more appropriate with the Right, it could stem from the fact that non-conservatives don’t know much about their opponents’ moral foundations. The Moral Foundations Theory, popularized by Jonathan Haidt, shows that progressives don’t know much about conservatives because they don’t possess the five foundations—care, fairness, loyalty, sanctity, and authority. Rubin doesn’t acknowledge this since he’s merely interested in the political stakes. But he cites Arnold Kling (and The Three Languages of Politics), who states the priority for each political tribe as its main language; for progressives, it’s oppression; for conservatives, it’s civilization; and for libertarians, it’s liberty and freedom. He eagerly defends liberty by saying the Left abandoned any interest in individual responsibility. That would involve further detail than references of Adam Smith and John Stuart Mill, yet Rubin doesn’t do that.

As a memoir, Don’t Burn This Book would imply that the effort is very personal. Rubin believes he can play the self-help guru like Jordan Peterson, presenting the book as though it has some grand purpose to it. This doesn’t work, mainly because Rubin doesn’t have the academic and professional capabilities to back it up. Thus the advice he provides—get a mentor, start a conversation with people of different backgrounds—is banal, with the most bizarre a suggestion that you should become a sapiosexual (the words “independent thinking actually makes you sexy” are written with the straightest of all faces). Given the lighter tone, the book doesn’t convey anything substantial that Rubin must lose, besides the political clout among his former colleagues and friends. It makes sense for his other cohorts; Bret Weinstein was shamed by the student body at Evergreen College for rejecting an anti-racism event; he can’t teach there anymore. Ayaan Hirsi Ali is shouted down for being heretical to Islam. What did Rubin have to sacrifice in leaving The Young Turks? It would work better had we known anything more than his background as a goofball.

A book released earlier called The Problem With Everything by Meghan Daum concerns many of the same issues as Don’t Burn This Book, capturing the calamity of political homelessness in her own circles. The difference is that Daum made the stakes evident by clarifying her evolved positions on feminism and campus culture, and that she stood her ground. Her exhaustion from wokeness led her to an interest in the Intellectual Dark Web, enabling her to smoothly reconcile with her ex-husband. Comparatively, Rubin’s book isn’t interested in reforming the Left that he once belonged to, and so his political independence feels less like coming to terms than burning bridges.

But who is Rubin’s book for? It’s for fans of “The Rubin Report” and the Intellectual Dark Web. Do they often happen to be straight, white, and male? Probably, but there are many people who encompass one or more of these opposite traits, who don’t feel that they think and speak in collective terms and are vocal about it. There’s a reason why Rubin was a sidekick in Jordan Peterson’s world tour, and that is his ability in resembling his acolytes. When I went to one of his shows, Rubin began by cracking several jokes (usually targeting progressives), before letting the Canadian professor on to the stage. It’s sly. Many people laughed along and it’s a function that succeeds in its purpose, providing a lighter guide first before you dive further into deeper reads. It resembles humility, while insufficient to transcend its values, that shows Rubin looking open.

If the problem with Rubin isn’t that his political conversion is cynically driven to get people become more interested with conservatism, while thinking that they themselves are valuable in looking outside of the Overton Window, then it lies in his role as a curator. He’s okay with it and so are his fans, who are detached from the rowdiness of today’s politics. But that comes with the flaw in downplaying himself below Shapiro and Peterson; it means that people will inevitably take him less seriously. When Rubin calls out his opponents, it results in something uninspired and worthless to destroy.