Memorial Day 2020 should be about murdered birds eaten by fat Americans, not veterans. 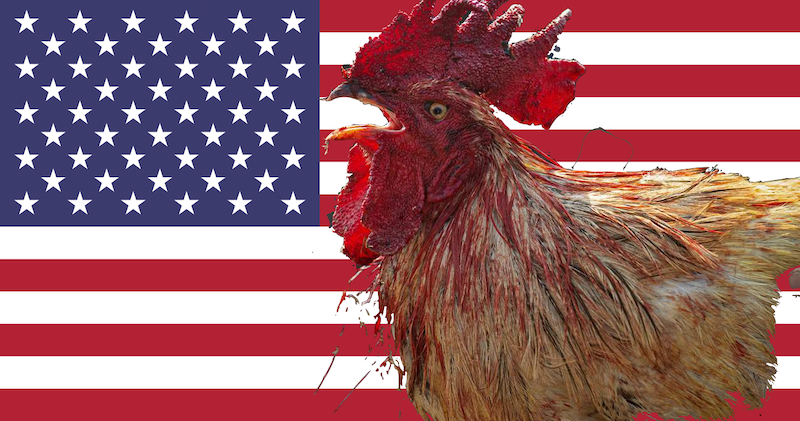 Today is Monday May 25, 2020. I’m sitting on my back porch in rural Massachusetts, the noon sun is brazen and blazing in its typical arrogance, and I have a fat jug of corn whiskey next to my typewriter. Life is good, but today we don’t talk about that. Today is Memorial Day: every year in the United States, we take a day off to roast, fillet, and barbecue animals and plants in memory of our fallen soldiers. It’s really the most obscene spectacle, a disgusting display of affection.

I understand the sentiment: our veterans deserve every break and benefit they can get once they’re home. It’s criminal how they are treated now, not to mention our first responders. But cooking meats? Future generations will regard us with the same curious skepticism of Medieval Magna Carta contemporaries who produced brilliant, enduring work yet owned slaves and only bathed twice a decade.

Memorial Day wasn’t always celebrated on the last Monday of May. From 1868 to 1970, Memorial Day was always May 30. I don’t remember when it was changed or why—I can only guess it was a beleaguered Congress genuflecting to the one quality the counterculture gave us that has remained intact: unabashed laziness. We like the long weekend, they whine. Okay, well, I like to do the same thing every day. Great minds keep very rigorous routines: Arthur Schopenhauer, David Lynch, Jason Molina. These men were artists who understood discipline is as essential as talent. Too many people I know—myself included, perhaps—are fixed on never finishing anything.

Monica and I watched the 2009 film Humpday over the weekend in honor of writer/director Lynn Shelton, who died last week at 54. It’s a familiar story: an old friend visits another who has settled down, married, bought a house. The old friend hasn’t grown up, and in his words, “I just want to fucking finish something, man.” To give some context, he’s referring to a gay sex tape he wants to make with his old friend so they can enter it into an “art porn festival” called Humpfest sponsored by Seattle weekly The Stranger. It’s a very strange film, of the “mumblecore” movement I’m told. She will be missed.

To finish something—so many people struggle with this. Even God. Look at the giraffe: there are infinite possibilities in that animal. And what do we get for it? Funny pictures, caricatures, jokes about its neck. Take another look: that neck is a work of art. Smaller mammals and insects could utilize as an escalator of sorts, but they’ve made no effort to make inroads with the giraffe community, and the lack of effort is mutual. Often I find myself exceedingly disappointed in my peers in the animal kingdom. Some of them haven’t taken the redpill yet… uh I mean some of them are… not as evolved mentally as us Quibbitses.

But I digress. It’s time to talk about the military.

I saw Full Metal Jacket in 1988 and it made me want to occupy the West Bank. You can imagine my disappointment when I found out that had already been taken care of. Monica and I decided on New York City instead, the “asphalt jungle,” the city that never sleeps, Da Big Apple. Of course, these clichés didn’t exist in the late-1980s when crack cocaine and AIDS ravaged the streets in a prelude to the current pandemic wreaking havoc on the gorgeous city. I love New York—having spent most of the last 30 years in New England, I make a point of visiting the city whenever I can for business and even often pleasure.

Monica and I love shopping at Macy’s. We’re rarely allowed in, but usually we have a few friends in the city who will sneak us in with their Hermes bags. It’s really cute, honestly. One time a very old woman, maybe in her late-90s, mistook me for a cat. I had to try hard to keep from spur-clawing her, such an insult, but I maintained composure so my friend wouldn’t get in trouble. I’m not sure we ever saw those people again. I think their names were Jennifer and… Michael. Maybe. They were jet-setters, always flying on the Concorde and drinking champagne and buying first generation iMacs and investing in magazines and floppy drives. They were very cool and very chic for a while but eventually they disappeared into the fashion/terrorist cell that took over Manhattan in the mid-1990s that inspired Bret Easton Ellis’ “novel” Glamorama.

Look, I was there. Every word in that book is true. Still wondering why you’ve never heard of it? Too slow. Keep up. Do better.

I wish my friend Oliver Bateman all the best in his relatively new venture with Aimee Terese, the What’s Left podcast. Oliver’s a good man, and while I don’t know Aimee personally, I enjoy her commentary greatly and sympathize with her. She’s constantly persecuted by like-minded individuals indulging in the narcissism of small differences. Aimee appears to be a strong person who doesn’t back down—I like that.

Oliver wrestles, so he can’t back down, ever. He’d lose the match. But Aimee, they say she’s “haram.” Why? Because she questions Tara Reade’s allegations? I really don’t know anymore. I thought quarantine would make people smarter through reflection, but really it’s made everyone regress and replay the petty bourgeois arguments of the past four years. I find it rather boring, honestly. I’d rather read a book, or do heroin. I’ll read for now.