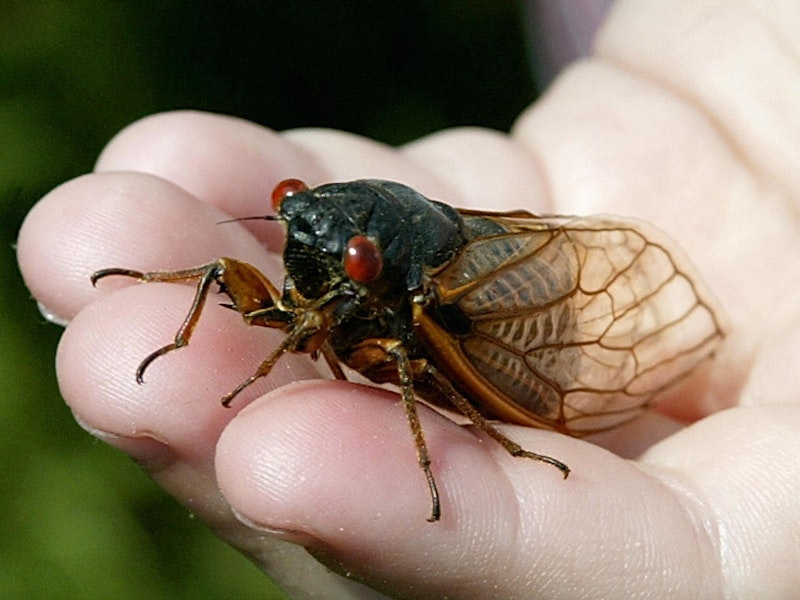 Citizens of southwest Virginia, West Virginia, and parts of North Carolina are apt to be hearing something they haven’t in close to two decades. Anatomically, the sound comes from a vibrating abdominal membrane, meant to be a sort of, “Can I buy you a drink?”

When my abdominal membrane vibrates, it usually happens after my wife takes the lid off the pot while making tomato sauce from scratch. Anyway, it isn’t my abdomen making the noise, here. The responsible party is Brood IX. I’ll admit that “Brood IX” sounds like the dire warning issued in a secret lab in a B-grade sci-fi flick. Not the case. Brood IX comprises the millions of cicadas that have just begun appearing from the ground in the aforementioned states.

Periodic cicadas (or locusts) are due in very specific areas of the country. This brood hasn’t been heard from since 2003-4, so the 17-year variety is up to bat. The Virginia Cooperative Extension tells us that as many as a million and a half cicadas per acre can take to the skies in the approximate six-week window which is just now opening.

Good news: you won’t be bitten by a cicada. And they’re not poisonous. Many of them won’t make it into flight. That’s because, after leaving their 17-year home in the ground, and attaching themselves in the nymph stage to a young, thin tree branch, they have to go through their own “getting dolled up” phase before the hot date part begins. Cicadas build something called a “mud turret” to leave the ground where they’ve been waiting. When the time’s right, they shed their exoskeleton, and here’s the tricky part. Once that outer shell drops, the almost mature winged creature is wet. And that’s bad, because wet wings won’t work. I find this very much like those minutes on date night, just post-shower, when I’m trying to figure out which jeans I’m putting on. I’m feeling pretty vulnerable in those moments, too. Someone could’ve told me years ago—the choice of jeans wont matter.

There each of our millions of locusts sit, ripe to be picked off by any number of predators. Some fall into ponds, where frogs have a nice nosh. Some die where they sit. But the vast numbers of insect that leave the ground together are part of an evolutionary process, whereby there are enough bugs to allow some to mate, lay eggs, and start the long cycle all over again.

The people most concerned with the pests are fruit (and other) tree farmers. Apple trees get hard hit, as well as oaks and peach trees, and other hardwoods. Female cicadas use their ovipositor, a sort of saw, to cut into a tree branch and then deposits her eggs. Because the branch has been cut open, it will die. Enough of this activity in a concentrated area can cause branches and sections of trees to die. Given that one female can leave as many as 400 eggs in 50 different locations, you can see why trees can get badly damaged.

One brood of cicada or another appears virtually every year, in some of 15 recorded United States locations. Some broods are small in number, compared to Brood IX. Last year, Brood XIII came to four states; next year, Brood X will infest 15 states and the District of Columbia. Lots of noise.