The Caning of Charles Sumner

Tomorrow is the 164th anniversary of one of the most shocking and obscure acts of political violence in our country's history. 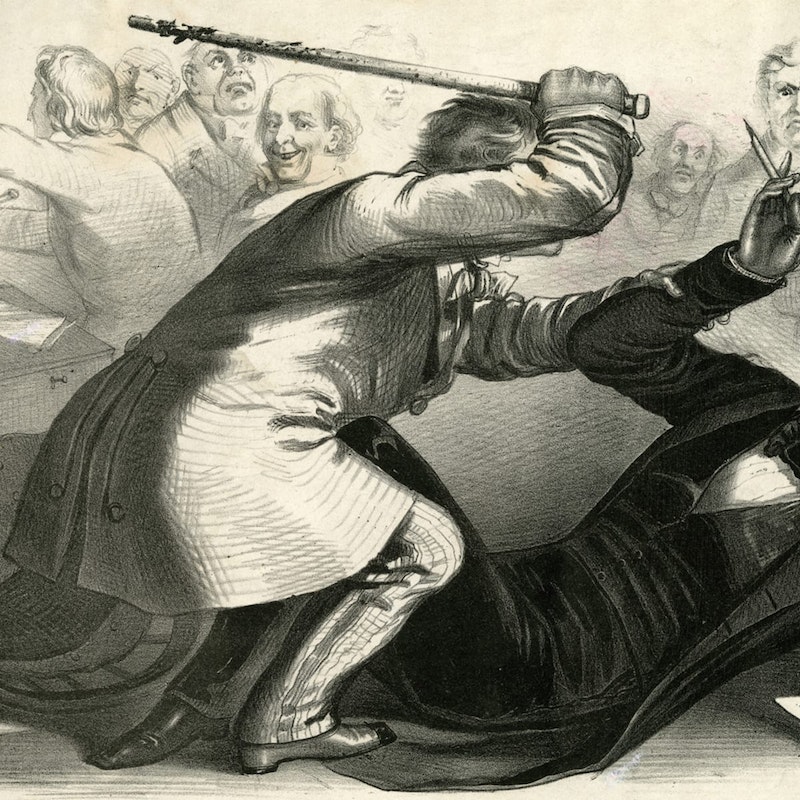 Incivility’s an American tradition. This Friday will mark the 164th anniversary of our most shocking instance of political incivility, although it’s hardly a strong enough word to describe the brutality of the event known as “The Caning of Charles Sumner.” South Carolina House of Representatives member Rep. Preston Brooks, a Democrat from South Carolina, entered the Senate chamber on May 22, 1856 looking for blood. He found Sen. Charles Sumner, a Republican from Massachusetts, working at his desk and beat him over the head repeatedly with a gold-tipped cane with blows so severe that they finally shattered the cane, but not before Sumner was nearly killed.

The abolitionist senator's offense? He'd just given an incendiary speech critical of slavery and its proponents. Brooks thought Sumner had gone too far by including a vicious tirade against Brooks’ distant cousin, Sen. Andrew Butler from South Carolina, for his championing of slavery. Southern men in the 19th century were taught a rigid code of honor that included defending family members from attacks. The caning left Sumner unable to return to the Senate for three years, while people from all over the South sent Brooks, who was not even ousted from Congress, replacement canes.

Since those days, we’ve progressed as a nation to the point where modern incivility is defined by Rep. Joe Wilson of South Carolina shouting “You lie!” at President Obama during his speech to Congress in 2009. But when a nation’s founded on the concept of liberty, rather than maximizing societal welfare—like Singapore, for example—incivility’s destined to be woven into the fabric of public discourse.

The Boston Tea Party wasn't an act of civility. And when people who need to work to feed their children feel they're deprived of that right, as some are now, they'll react like people once did when they felt they were being taxed without representation.

Currently, we have leaders, convinced that their attention to minutiae will get us through this pandemic, regulating tennis matches on re-opened public courts. A Long Island government official recently said, “Every player, unless they're from the same household, has to bring their own tennis balls so that you don't touch other people's tennis balls.” She has no idea that it's impossible to play tennis without touching a ball your opponent has also touched, regardless of who supplies the can of balls. That's the government flailing about and accomplishing nothing just so leaders can give the appearance of taking strong action. Not all will be civil when the Tennis Police storm the court.

House Speaker Nancy Pelosi recently called Donald Trump "morbidly obese," after she'd already ripped up his State of the Union speech earlier this year. Trump, who once called Rosie O'Donnell a "fat pig," encourages incivility. He views civility as a sign of weakness.

But it's not just Trump's fault. Plenty of Democrats are saying that anyone in favor of restarting the economy wants people to die. That’s going to have serious repercussions as it's poisoning the essential debate on getting out of the lockdown. The fallout from this widespread example has the potential to dwarf the totality of Trump's incivility if it prevents us from getting back to business in time to save all the lives a wrecked economy will claim.

Incivility is unpleasant from an aesthetic point of view, and can stifle debate, but it shouldn't be looked at as something with only downsides. It's tempting to think that, if we all behaved like Mr. Rogers towards each other, we'd overcome our differences with calm and measured debate. But incivility can get your political voice heard when other more subtle methods have failed. Taking your shoe off and banging it on the table is a way to get people's attention when politeness has failed.

Rudeness is flourishing, and it’ll only get worse as the cumulative mental health toll from the health crisis mounts.