The GOP does politics like a Will Ferrell movie. 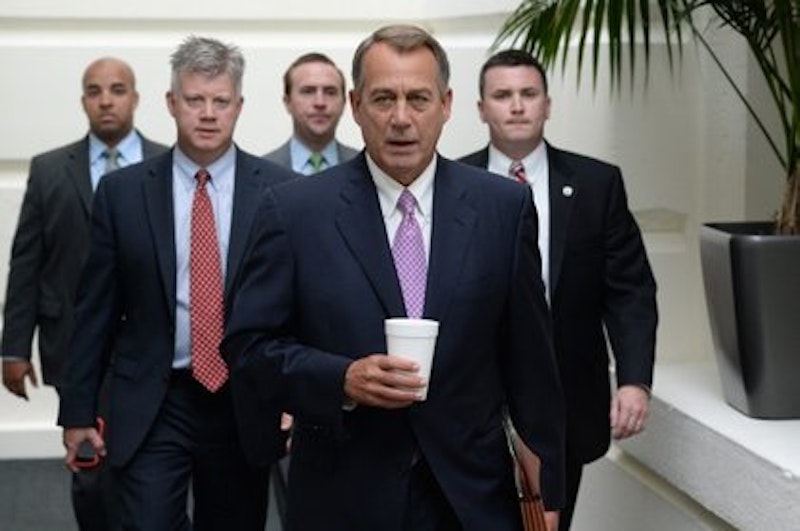 If the House ever tried impeaching President Obama, it would give him a ratings boost. He wouldn't leave office, he wouldn't be hampered all that much. He could send down a mid-rank Justice lawyer and leave the defense at that. What could the Republicans say, that he wasn't taking it seriously? Nobody would be taking it seriously. It would be just the Republicans having a fit.

The wingnuts have had their Congress and it's been scrambled eggs the whole time. The neocons had Iraq to show that they were incompetent motormouths. The pinstripes had the financial meltdown to prove they were mentally crippled by greed. The wingnuts have the 113th Congress, the Congress that played out like a Will Ferrell sketch, to show that wingnuts know nothing about political reality. The wingnuts thought they could screw with America by cutting off government funding and nearly wrecking our credit. Now nobody has to make a case against them; all people have to do is point. That's a central fact of the landscape for politicians: the wingnuts are now the blistered crater that you step around.

They're still there and they won't be getting better, but maybe they won't expect to impact actual policy all that much. They may settle for pretend stuff, stunts and mad sallies. The wingnuts are good at working each other up, like kids running out in their pajamas and waving pillows at the grown-ups. It's made for a wild time, but the upside is that they're happy as long as they're pumped. Right now they're feeling rosy—valorous and rosy. John Boehner is good enough to keep around.  “I’ve actually been really proud of Speaker Boehner over the last two and a half weeks,” says Rep. Raúl Labrador, who has been in Congress just a little more than two and a half years.

The boys had run the speaker ragged. What could he turn up when they knew they had to have something but the cupboard was bare? Tuesday was slaphappy. Boehner had launched the day's proceedings by telling the gang it was time to pass a funding bill and debt ceiling increase before the Senate did. Stick on mild, common-sense provisions that were still big enough to count as policy ransom, then watch the Senate Democrats try to explain why they stubbornly held the line against these simple reforms.

The mood was high, but then Boehner found his boys just wouldn't line up. Not for yanking the medical devices tax, not for making sure the President and the other big politicians couldn't get insurance subsidies from the government. He tried the package one way, with health insurance subsidies for staffers. The boys shook their heads. No aid for politicians, but aid for staffers? Seemed like a contradiction. They figured maybe they'd be better off messing with their employees' finances and letting that be the official Republican approach to the great issues at hand. So Boehner tried the package the other way, no aid for staffers. The boys said no again.

Quite possibly, Boehner now sat on the ground and punched his knee and waited for someone to take the game away from him. And the Senate did carry the ball from there on, with Boehner quietly watching. But the guys still wanted him around. The mood had remained high and he was going to be speaker, just like he was now. None of it had mattered after all.

On Wednesday, while the Senate did its work, the House Republicans gathered once again. Robert Costa of the National Review reports in a Tweet: “The funniest moment of today's GOP conf mtg: no one wanted to speak at open mic, and then Steve King yelled, 'adjourn!' Lots of chuckles.” No one wanted to show their face, but the mood was high.

As for you, Obama. Now may be a good time for a Cuban missile crisis comparison. John Kennedy got us into that mess by trying to knock over Cuba's government and botching the job, and by letting himself get rattled when the leader of the Soviet Union laid into him during a summit meeting. Barack Obama got us into the government shutdown and debt crisis simply by being a dope. He negotiated with the Republicans the first time they threatened to block an increase in the debt ceiling, back in 2011, and of course they came back for more.

The Russians thought Kennedy wouldn't do anything if they set up nuclear launch sites in Cuba. The Republicans thought Obama would take for granted that debt limit time was the time to let them act on their policy wish list. Kennedy and Obama had to put the world through night sweats before their adversaries learned better. In both cases it was worth it. But the route to sanity was definitely the long way around. We could all have died or we could all have gone broke, and the risk would never have come up if a little thought had been exercised early on.

Don't launch a coup just to see what will happen, especially if the other country is getting close to a country with nuclear missiles. And don't negotiate with politicians who are threatening to crash the world's economy. They're not in a reasonable frame of mind; if they were, they wouldn't be making that particular threat. These rules have nothing to do with morality, but they make a lot of sense. Follow them and the rest of us might not have to be so worried.