President Obama Speaks About the GOP

“The Republicans have to stop playing in traffic.” 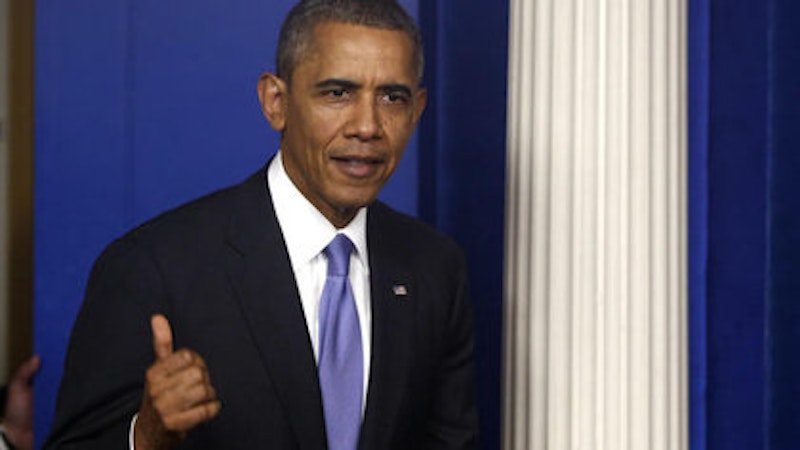 Those are the partners I've got, there's no one else to talk to, but eventually you have to speak up and state a truth. We've been stuck with these people for 15 or 20 years now, and we've got to recognize that they don't act the way we do. They don't judge risk the same way. They don't catch on as fast that your view, one person's view, isn't the only view. Their minds are geared differently and their minds are not geared well.

The results have been the past couple of decades in our public life and this series of bumps, series of crashes that have kept giving us headaches, banging us up. Look at the problems we have now: paying for Iraq and our veterans, trying to get the economy going after Wall Street fell down, trying to keep funded after slashing our taxes down.

We'd love to live without those problems. To us that would be success, just to get back to where we were before. Before what? Before we invaded Iraq and figured it would just work out. Before we took down all those rules for Wall Street. Before we threw away a lot of the government's revenues.

All of these problems, they all started with somebody in power having a bright idea. “Hey, let's go invade Iraq and make the Middle East into a whole new place.” “Hey, let's get rid of those rules we have and let Wall Street change the world.” “Hey, let's get the price of government right down to where we want it and then assume that'll be enough to pay for it.” Just make that big move and everything’s gonna be different, be just the way you want. But no, what happens is mess. We're living with years and years of that mess.

Now we know where they were heading. Each time they wanted to go play on the thruway. They love that place. They want the whiz of the big traffic going past them, the thunder. And what happens is that they get run down by big, barreling realities, real mothers. Tractor-trailers like how nation-building is a bitch, and how people making billions don't care about tomorrow because they're getting everything today, and how you need this much money to pay for that much whatever.

Time and time again, and we get run down with them. Here's the latest. Somebody on the Republican side said, “You know what? All we have to do is look them in the eye, grab that funding bill and squeeze, and everybody will do what we want. The Democrats will give way.” And another one said, “No, what we do is put our finger on that debt limit button and make like we're going to push it. That'll get them. The Democrats will do whatever we want.” That's what the argument was about, which of these two big moves was more of a big move. And then they all headed for the thruway.

We all got banged up because of it. You know that the analysts say the country lost $24 billion in economic activity, just because Republicans figured now was the time to try their bright ideas. But this time their party was what really got hit, hit the hardest. That's not the worst damage, not the most serious, because that would be the damage the regular people took, which I mentioned. But it was the most extensive damage. The Republicans just got run over by the brute fact of all political life: people want you to make them better off, not worse. People don't want you threatening to put them out of work, make them bankrupt. If you make threats like that, the people turn against you very fast.

Basic. But that's the truck the Republicans picked. They ran toward it and jumped, and now the pain has taught some of them a lesson, some of them. That's why I hold out some hope of working with the Republicans over the next couple of years. But people who need that kind of lesson in the first place… well, there’s not much you can do with those people except superintend them. That's what the rest of us have to do, Democrats and non-Democrats. We have to superintend the Republicans. When they have any bright ideas, we have to make sure they don't get down to the road. Let them do that and too much trouble results.