This week's blizzard allowed Mayor Daley yet another chance to do what he does best: fuck-up and blame the public. 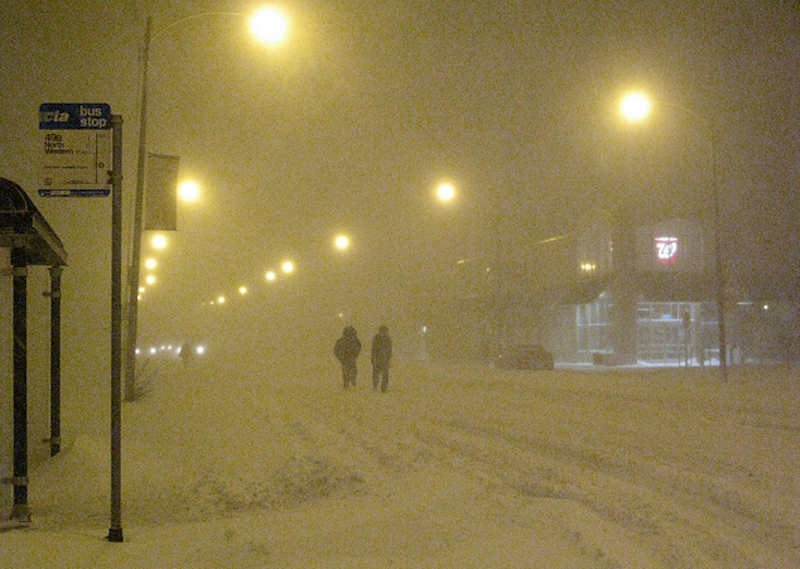 There was a time when I believed that politicians were oleaginous hacks; smooth talking car salesmen who kissed your baby, massaged your palm, and only kicked you in the ass when you’d already turned around and couldn’t pin it on them.

Then I moved to Chicago.

Chicago politicians aren’t smooth. They don’t kiss your baby. They spit on your baby, kick you in the nuts, and then laugh and say it’s your own damn fault for being dumb enough to live and reproduce in the Windy City.

Richard M. Daley is finally stepping down as Chicago’s mayor after roughly 12 centuries, including 9645 news conferences filled with semi-articulate self-justifying sputter. Before he heads out though, he wanted to deliver one last “fuck you” to the Chicagoans he cordially despises, and Chicago’s recent massive snowstorm gave him the opportunity.

As you probably know if you saw the news, Chicago’s response to the storm was, shall we say, inadequate. High winds, giant waves, and 20 inches of snow resulted in multiple wrecks on Lake Shore Drive, resulting in multiple accidents and impassable conditions. More than 1000 cars were abandoned on the road; many unlucky travelers spent all night in their cars or in trapped buses that were converted into warming centers. Many motorists simply abandoned their cars; as of Wednesday night, more than 24 hours after the snow started, there were still a reported 200 vehicles trapped on the road and city officials were uncertain whether the Drive would be open for morning rush hour.

So. The city’s major thoroughfare turned into a frozen hell, citizens abandoned their cars and braved 70-mile winds to stagger about in blinding snow—one might suggest that perhaps the Daley administration’s response to the blizzard was not ideal. For instance, you could argue that Mayor Daley should not have gone on public radio in the hours before the snow hit to suggest that a blizzard was no reason for people to take off work. Maybe, with 25-foot waves predicted and the wind rising, the city should have either closed the Drive or had some vague idea of what to do in case there were accidents.

Or, failing all that, maybe our elected officials, having inflicted massive suffering and inconvenience through their bungling, could, I don’t know, apologize.

But that is not the Chicago way. And what is the Chicago way? Why, blame the public. On cue, Raymond Orozco, Daley’s chief of staff, found a microphone and announced that people had been warned that Lake Shore Drive would be dangerous. If they used it anyway, well, that wasn’t his fault. Daley had told them to go to work, after all—he hadn’t said anything about coming home.

Orozco also declared that he made the right decision in keeping the Drive open, because otherwise things would have been worse. "If we could just for a moment imagine the wait times and possible accidents if we had routed motorists downtown," he said. “What we know at this time is that no serious injuries or loss of life during what was considered a life threatening storm. I believe it was the right call to make."

In other words: hey, nobody died.

Daley, at least, has had the minimal decency to duck reporters—or maybe his car just can’t get to the press conference. In any case, I’m sure that eventually he’ll come out of hiding and start sputtering about how the problem is that Chicagoans just don’t know how to drive in snow.