Or Biden sticking them into himself. 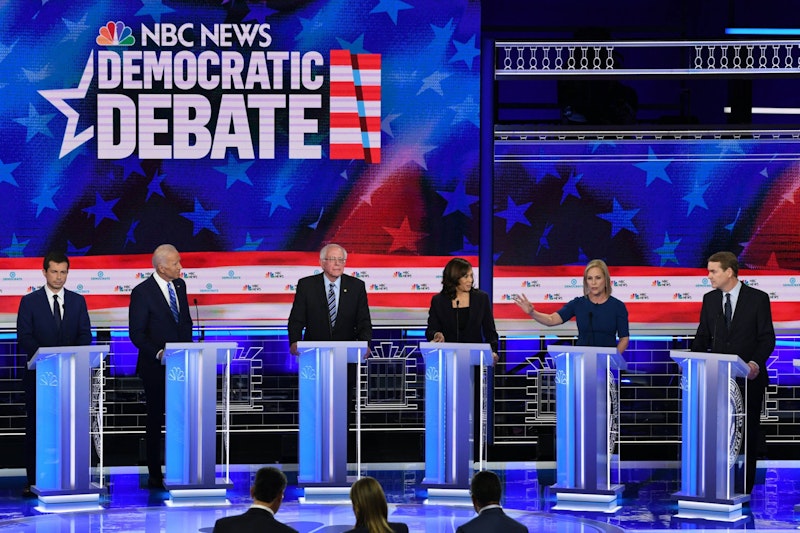 My favorite columnist Alexandra Petri made merciless fun of Marianne Williamson's contribution to the debate last night, but (a) I feel that Williamson may be on to something, and (b) no matter how ridiculous you may feel Williamson is as a presidential candidate, she's less ridiculous than Joe Biden, as I hope to demonstrate.

My evaluations are mostly not going to surprise people who sucked up the punditry this morning. Kamala Harris was excellent, and destroyed Biden. Buttigieg did well too: he seemed painfully sincere and actually tormented by problems in South Bend. Then again, South Bend has problems, evidently, and he explicitly said he hasn't addressed them adequately. I think Sanders did fine; Sanders is always the same, so what were you expecting? Michael Bennet sort of snuck up on me.

We can dismiss Swalwell, whose relentless generational war is not enough. We can dismiss Hickenlooper and Yang, who did nothing. Gillibrand is over-amped and under-coherent, though she's not as incoherent as Biden (perhaps no one is). She's relentless on the gender wars, and concluded "women are on fire in America." Maybe she can win New Hampshire without a single male vote? If your basic strategy is max gender gaps, you lose as much as you gain.

Williamson won’t be elected president. But I think she's showing, in her too-dismissable way, what politics could be. Her initial answer, which pundits have made fun of, connected climate, food, and healthcare in a relatively profound way. She was trying to move the conversation to the plane of meaning, and framing a hypothetical general election between her and Trump as a contest between love and hate. She’s not inspiring, but I think a person with a coherent spiritual politics along these lines could. Buttigieg, who has inched toward something similar, should take some notes (and do some editing).

And while we're eliminating people, let's eliminate Biden, who’s a genuine fool. He said nothing. Here are a few highlights, cut and pasted from The New York Times' transcript. Again, my advice is to look squarely at what he said rather than infer what he may have tried to say.

"Look, Donald Trump has put us in a horrible situation. We do have enormous income inequality and one thing I agree honestly can make massive cuts in the $1.6 trillion in tax loopholes out there."

"We should—we could be doing this by making sure everyone who is on Medicare—that the government should be able to negotiate the price for what—whatever the drug costs are. We can do this by making sure that we’re in a position that we in fact allow people—you mean time’s up?”

"Now, number two, as the U.S.—as—excuse me—as the vice president of the United States, I worked with a man who in fact, we worked very hard to see to it we dealt with these issues in a major, major way. The fact is that in terms of bussing, the bussing, I never—you [Kamala] would’ve been able to go to school the same exact way because it was a local decision made by your city council. That’s fine. That’s one of the things I argued for that we should not be—we should be breaking down these lines. I did not oppose bussing in America. What I opposed is bussing ordered by the Department of Education. That’s what I opposed." [The Department of Education did not exist when the bussing controversy was in progress.]

"I have also argued very strongly that we in fact deal with the notion of denying people access to the ballot box. I agree that everybody once they in fact—my time is up. I’m sorry."

"And new science and technology to be the exporter not only of the green economy, but economy that can create millions of jobs. But, I would immediately rejoin the Paris Climate Accord. I would up the ante in that accord, which it calls for because we make up 15 percent of the problem; 85 percent of the world makes up the rest."

"Number two, we increased that background check when—when—during the Obama-Biden administration. I’m also the only guy that got assault weapons banned, banned, and the number of clips in a gun banned."

"[Trump] is the only President who is that in engaged and embraced dictators and thumb their nose at our allies.”

"I am secondly running for President because I think we have to restore the backbone of America. The poor and hard-working middle-class people. You can’t do that without replacing them with the dignity they once had. Lastly, we’ve got to unite the United States of America as much as anybody says we can’t."

Through much of the period in which Biden’s been active in politics, Democrats have ridiculed the intelligence of Republicans, for example of Ronald Reagan and George W. Bush. Before they do any more of that, they've got to get rid of Joe Biden.