The whole performance is dishonest. 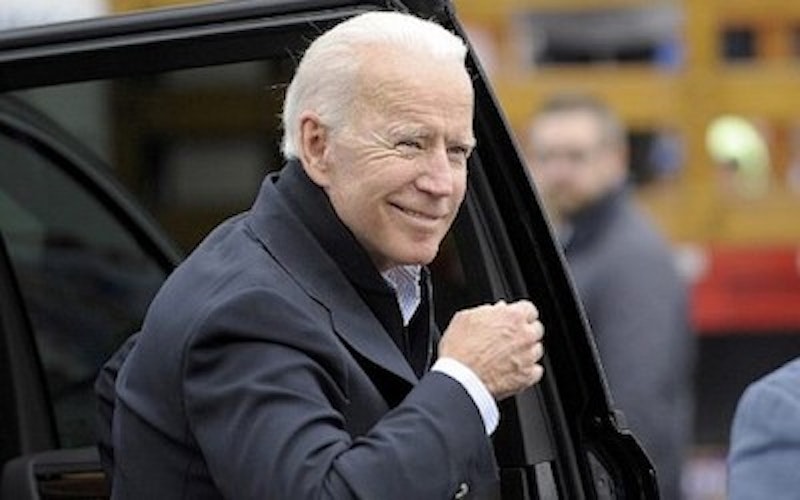 Why do I roll my eyes at the name “Joe Biden”? He's so lovable and electable! And, allegedly, he has that common touch that brings "working-class white people" out to the polls. And that resumé! Chairing both Foreign Affairs and Judiciary in the Senate, Veep etc. Also, he’s suffered so much that he empathizes with suffering Americans like me. He makes an emotional connection.

I think of Joe Biden, first of all, as a rattletrap, a flibbertigibbet. He's constantly talking, only very intermittently making sense. He displays a quality one sometimes sees in politicians: a sort of social desperation. He needs other people to like him, and says whatever seems to help that happen at the moment. He doesn't speak from an inner core of conviction. Also, I don't think he's particularly bright.

But I also want to acknowledge some good moments. Early in 2012, before Obama had managed to endorse gay marriage, Biden did it for him in a CNN interview, and "forced Obama's hand." It was a sort of beautiful moment in the history of spin, as David Axelrod tweeted, "What the VP said—that all married couples should have the same legal rights—is (precisely) POTUS' position," which was pitiful. Then Obama endorsed gay marriage (very late, but some years before Hillary Clinton did, for example); he said he probably would’ve endorsed gay marriage before the election anyway, but Biden had changed the schedule.

Biden endorsed gay marriage in a rattletrap manner. "I just think that the good news is that as more and more Americans come to understand what this is all about, it is a simple proposition: Who do you love? Who do you love?" That almost manages to formulate the gay rights talking point of the moment ("You can't help who you love," etc). Then he went on to describe the source of his profound realization, which occurred around the same moment that gay marriage started polling over 50 percent: "I think Will and Grace did more to educate the American public than almost anything anybody has ever done." Nevertheless, it was a key moment, because it got Barack moving.

At any rate, the "I'm going to keep yapping randomly until everyone loves me" approach is precisely what has gotten Biden into difficulties here and there. It's not that I was particularly enthusiastic about Biden in 1987, as he ran for the Democratic nomination against Michael Dukakis, Paul Simon, Al Gore, Jesse Jackson, and so on. But I did wave him off semi-permanently after he gave a speech plagiarized from the British Labour Party leader Neil Kinnock.

Biden didn’t swipe little slogans or policy formulations. He swiped Kinnock's autobiography, and he did it with great passion and falsity. In a widely celebrated speech, Kinnock had asked: "Why am I the first Kinnock in a thousand generations to be able to get to university? Why is Glenys [his wife] the first woman in her family in a thousand generations to be able to get to university? Was it because all our predecessors were thick?" Biden: "Why is it that Joe Biden is the first in his family ever to go to a university? Why is it that my wife who is sitting out there in the audience is the first in her family to ever go to college? Is it because our fathers and mothers were not bright? Is it because I'm the first Biden in a thousand generations to get a college and a graduate degree that I was smarter than the rest?"

The only thing keeping this from collapsing into perfect mechanical copying is verbal incompetence. He's telling you that he's smart and that he has graduate degrees. But he's doing it in someone else's words, while definitely showing that he's not “smarter than the rest.” Apparently, a number of Bidens in various generations had gone to college, and the idea that the theft from Kinnock was inadvertent is ridiculous, unless the person doing the stealing is the sort of person who can actually forget who they are in an ecstasy of self-aggrandizement.

Speaking of graduate degrees, Biden was also accused in law school at Syracuse of plagiarizing a law review article, and acknowledged his guilt for purposes of the disciplinary proceeding. However, he said he'd just omitted a citation, and that "my intent was not to deceive anyone. For if it were, I would not have been so blatant.'' First, there's never been a more blatant plagiarism than the Kinnock theft. And second, as a professor, I’m aware that this is exactly what students say when caught cutting and pasting whole passages or papers, despite all the pains taken to convey the basic concept of adequate citation. And of all the defenses that Satan whispers into the ears of malefactors, "I would never be that stupid!" is no doubt the worst, on multiple grounds.

I’m going to find it difficult to support anyone who voted for the Iraq invasion and the Patriot Act, and I think a lot of the people who made those votes—including Biden and Hillary Clinton—knew they were wrong, and cast them because they thought opposition would end their presidential ambitions. (They were probably right about that; cf. the sad tale of Russ Feingold.)

If Biden hadn't already lost me, though, he certainly would’ve lost me in 2005, when, as a senior member of the Senate Judiciary Committee, he questioned Samuel Alito during the latter's confirmation hearings for the Supreme Court. He's got 20 minutes. He takes virtually the whole time spinning around in a verbal soup, saying absolutely nothing, and asking no questions (he gets one out at around four minutes, spins randomly for another eight minutes, mangles his way through an account of a case that Alito had decided as Circuit Court judge, and then sort of gets to another question). Through it all, he rattles on in random sentence fragments. Or it's a little worse than that: he hits Alito with a series of disingenuous observations meant to be disarming, as in, "I don't think anyone thinks you are a man lacking in integrity," but then goes on to hint over and over that Alito obviously is such a man. "People are puzzled," he keeps saying.

The whole performance is dishonest. Or it would be, if it made any clear points or addressed any clear questions to the witness. Really, he wants to tell you that his son went to Penn. He wants to tell you that he himself spoke at Princeton. Then he starts talking about basketball and crew and says things like "I remember there was a great disavowing," as Alito sits there and tries not to roll his eyes. "I have two kids who went to Ivy League schools," says Biden: really his main point.

A rattletrap, in short. A flibbertigibbet. A fool. But electable.