None of these candidates are an obvious match for Trump. 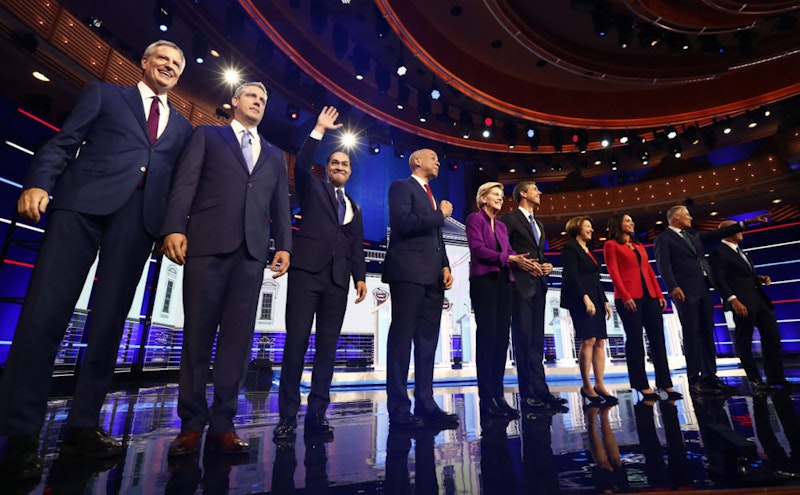 I thought Tulsi Gabbard won last night’s Democratic debate, even if she didn't respond to the first question directed at her, preferring to sketch her life story. All the candidates must pare their life stories down to 30 seconds and make them compelling, focus-group the result, and then revise. Even they know it's jive. Anyway, I like Gabbard's anti-war warrior persona and her complex demographics. You could sort of picture Julian Castro as president after his performance, which was surprising (at least to me).

Warren, Booker, and Klobuchar started with slight variations on the very same sentence: "This economy's not working for everybody. It must." It's vague as hell. I thought Warren seemed particularly brittle as she tried to sell it, and I'm puzzled by the good reviews she’s getting. I'd advise all candidates to steady down, relax, make an impression by trying to convey the impression that you're not trying to create an impression but merely standing there being effortlessly yourself. That's a remarkably difficult task. Still, I'd predict Warren as the nominee. Woman, progressive but wonkish: more or less every Democratic constituency can accept her.

Obviously, the function of these early debates is to winnow the field. I'm winnowing out de Blasio, Ryan, Inslee, and O'Rourke. White guys: looking whiter every day. O'Rourke always struck me as painfully sincere, but this was merely painful. The solutions he was assaying to specific disasters were "a conversation that includes everybody" or "being more proactive." It was like watching Bill Clinton circa 1988, but blander, and “proactive” has persisted from that day to this. I started thinking he was going to build another bridge to the 21st century. If O'Rourke is elected we're going to face pseudo-frank healing dialogues about race and gender, in perpetuity.

But I didn't come away thinking any of these people is an obvious match for Trump. Really, mechanically reciting your phraseology—which is everyone else's phraseology too—just makes you a victim when Trump starts riffing and tweeting. When you're in the middle of your "This economy isn't working for everyone" rigamarole, he's dropping an anvil on your head. When you're trying not to fuck up your rehearsed paragraph (which consists of a series of empty catch-phrases) he's firing a skewer right between your eyes.

If you can't improvise in response, or if there's no real you underneath the boring writing other people have provided you with, you're cooked. Maybe Klobuchar's pointed blandness makes a good contrast.

The main conclusion I drew from last night was that the Democrats are the same now as they were in 2016, and are still trying to generate Al Gores, John Kerrys, and Hillary Clintons: safety-first mumblers of other people vague non-ideas. That isn’t going to get the job done this time around. Let's see if there's anyone surprising, funny, loose, or themselves tonight.

But I did wake up this morning and send $5 to Tulsi.