Nearly anyone can get on the ballot in New Jersey, provided they don’t expect a fair count. 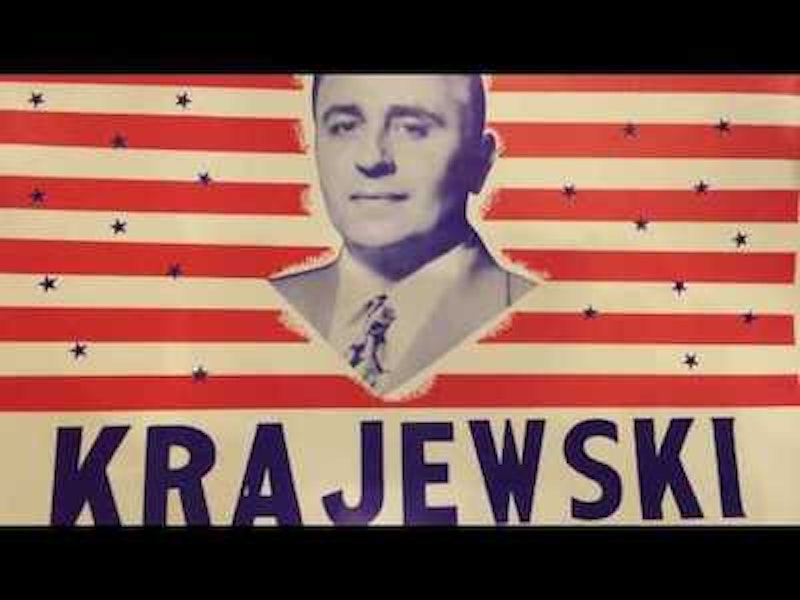 "Then Arthur smiled grimly, and Iddawg asked, 'Lord, what are you laughing at?'

"'I am laughing out of the sadness I feel at this Island's being in the care of such puny men as these, after the sort that held it before.'"

—From “The Dream of Rhonabwy,” The Mabinogion, p. 182, as translated by Jeffrey Gantz.

As the 24th or 25th serious Democratic presidential candidate, former Congressman and Vice Admiral Joseph Sestak, announced his candidacy the other day, I shook my head and turned to my bookshelves. That doesn’t reflect on the Admiral’s qualifications. Sometimes, though, there’s too much of a good thing, even in politics.

I note some unkind person has made a posting about politics being a synonym for poli-ticks, which is to say, many blood-sucking parasites.

The late George Thayer published his unjustly neglected The Farther Shores of Politics, a discussion of the American political fringe, in 1967. He wrote well, with dry wit, an eye for idiosyncratic detail, a sense of fair play, and an honest man’s unsentimental sympathy for the underdog. The Farther Shores is among the handful of books I revisit every other year or so.

It closes with an essay on a colorful independent presidential candidate. One contemplates the traditional, even classical images of our Presidents’ youth: Washington surveying the Virginia frontier, or Lincoln reading law by candlelight after working in the fields. Then there’s Henry B. Krajewski slopping hogs in Secaucus.

The pigs got him into politics. Until the early-1950s, Secaucus was a big pig-farming town, with some 75,000 pigs on 35 farms within its borders—more pigs than people. Drivers emerging from the Lincoln Midtown Tunnel immediately sensed they were in Secaucus from the stench: not of pigs (which are cleanly animals) but their feed: tons of rotting scraps from New York City and Newark restaurants.

The oldest of 11 children, Krajewski was born on July 15, 1912 in Jersey City’s Second Ward, the home of Democratic party boss Frank “I am the law in Jersey City” Hague. He pronounced his last name as Kra-ef-ski, although he didn’t mind people pronouncing it as spelled. One of his campaign fliers said he’d “been a messenger boy, errand boy, drove farm trucks, worked as a farm hand, sold newspapers, worked as a slaughter and skin man in the local piggeries and has also chopped wood for a living. He speaks and understands six languages and plays piano, accordion, guitar, banjo, organ, drum, and bugle.” He also had inherited a five-acre farm with 4000 pigs and Tammany Hall, a bar in the heart of the pig-farming district.

New Jersey Governor Alfred Driscoll claimed Secaucus farmers could raise pigs without raising a stink. Krajewski denounced him: “Before he picks on the pig farmers, he’d better clean up other sections of Jersey that smell worse than Secaucus,” he said indignantly. “Take the industrial area near the Pulaski Skyway—it smells like embalming fluid...”

Local officials started pestering him. In 1950, he was arrested for selling liquor to a minor in his tavern. He was only acquitted after 10 years of hearings and trials before the State Alcoholic Beverage Control Board and the state courts. Not unreasonably, Krajewski believed this a political prosecution because he wouldn’t roll over for Gov. Driscoll. Thus, as William Lowndes Yancey said of Jefferson Davis, the man and the hour were met.

The New York Times called Krajewski “a six-foot-tall, 240 pound mountain of a man.”  Thayer described Krajewski as “...Runyonesque... He was highly individualistic; he spoke with a classic Jersey City accent; he made ample use of his hands whenever he described something; he was softhearted and he had a rough-and-tumble wit.”

Getting into politics was easy. New Jersey is a sewer of corrupt elections with liberal ballot access laws. Nearly anyone can get on the ballot in New Jersey, provided they don’t expect a fair count.

Rejecting the two major parties as “boids of a feather,” he organized his own, consisting entirely of himself. In 1949, running as the candidate of the Poor Man’s Party, Krajewski was defeated for town council; the following year, he came in ninth of 34 candidates for Hudson County Freeholder, and a year later was defeated in the Secaucus municipal elections.

Now he was ready for the big time. He met Max Rosey (“a swell fella”), a public relations consultant, who promoted Krajewski free of charge. First Max gave him an image; a bandanna around his neck and a six-week-old baby pig under his arm for a mascot. He advertised in the newspapers for a running mate, and chose Frank Jenkins, a printing press operator from Rahway, New Jersey, of whom nothing else is known.

He called for “no piggy deals in Washington.” By contrast with the established parties’  “New Deal, Fair Deal, and raw deal,” he offered voters a square deal. He favored a one-year tax moratorium on all persons making less than $6000 a year, cutting taxes on gasoline and liquor, and chopping foreign aid to the bone. He also favored lowering the age for Social Security eligibility from 65 to 60.

He sought to eliminate youth crime by forcing all young people to work on a farm for a year. “Let ‘em rock’n’roll with the pigs and chickens at five o’clock in the he morning,” he told Thayer. “By the time the sun goes down they would be tired enough to go to sleep and not spend their time thievin’ and driftin’ around the streets at night lookin’ for mischief....”

Speaking for myself, after one summer working on an uncle’s farm in upstate New York, nothing, absolutely nothing, has seemed like work since.

When Krajewski filed his nominating petitions for President in 1952 (he was on the ballot only in New Jersey), he carried a small black-and-white pig under his arm into the courthouse. He told The New York Times, “The Democrats have been hogging the Administration at Washington for twenty years, and it’s about time the people began to squeal.” The room was packed with civil servants, candidates, interested bystanders, and the press. Thayer noted that these proceedings were somewhat disrupted when the pig relieved itself on some documents. Krajewski told him “that it definitely was an accident and that he had not planned it that way,” adding that the looks of dismay on the faces of the state officials had been most evident.

Then Max organized a parade in his honor down Broadway. Krajewski was the center of attraction, with a fashion model on each side of him and a 200-pound pig on a leash. In September, he again campaigned in Manhattan for write-in votes, orating from a metal beer keg at Broadway and 96th St.

Because he had neither money nor organization, Krajewski sought political gain through publicity. Whenever a campaign rolled around, the press appeared at his door and asked him to pose with the bandanna and pig. “I didn’t want to look silly,” said Krajewski, “but that was the only way the press would pay attention to me.”

Later in the campaign, he was invited to Phillips Exeter Academy in New Hampshire. The students were holding a mock convention. A faction wanted to celebrate “Krajewski Day.” Finding him appealing, the students gave him an enthusiastic welcome. “Them kids,” he told Thayer, “were so good to me it wasn’t funny. When I left, I cried like a baby.” In the school’s mock election, Krajewski placed second, behind Eisenhower.

The real 1952 results were somewhat different. Eisenhower polled 33,936,234; Adlai Stevenson, the Democrat, polled 27,314,992; then followed the Progressive, Prohibition, Socialist Labor, Socialist, Christian Nationalist, and Socialist Workers candidates, and finally Henry B. Krajewski, who polled 4203. When The New York Times asked what he thought of his showing, he replied, “It wasn’t enough.”

In early 1953, the state of New Jersey condemned his pig farm by eminent domain. In outrage, he ran for governor, staging a huge rally in front of Tammany Hall. The crowds gobbled 20,000 ears of corn, 800 gallons of clam chowder, and 30 barrels of birch beer. He came in fourth, polling some 12,881 votes. In 1954, Krajewski made his best showing, 35,421 votes for U.S. Senator as the only McCarthyite candidate against Clifford Case, an anti-McCarthy liberal Republican and Charles R. Howell, a machine Democrat.

The following year, Krajewski was defeated for Mayor of Secaucus. Undaunted, he again threw his Stetson in the ring in 1956. He held a pig roast across the street from a $100-a-plate dinner for Eisenhower at Madison Square Garden. He had a big sign made that read: “Walk across the street and save $98.02. Pig roast $1.98 for Poor Man’s Party candidate.” Thayer suggested the Republican dinner in Madison Square Garden was little more than a fancy box lunch: according to Krajewski, “As soon as the $100 dinner was over, our place was mobbed! All them rich Republicans came over and pulled that pig apart, bones and all!”

After a press conference in which he pointed out that Eisenhower and Stevenson had each received free tickets to the World Series, the Yankees gave him a ticket to the first game. Ike threw out the first ball; Henry was in the stands. Then Pravda denounced him as a “swineherder from the prairies of New Jersey,” and in a fit of snobbery, chastised the United States for allowing such a man to be a candidate.

On July 15, 1959, he celebrated his 47th birthday by announcing he’d run for president in 1960. He made a cross-country speaking tour, picketing both major party conventions, and, as one might expect, was shoved around by Democrats who lacked a sense of humor. But, as the Bible tells us, “A man’s foes: they shall be his own people.” In 1960, the New Jersey Secretary of State disqualified him from the ballot on technical grounds. One state official said, off the record, that his disqualification was due to his “lack of dignity.”

Given the current occupant of the Oval Office, one wonders what would constitute a lack of dignity today.

The closest Henry came to the White House was an invitation to Eisenhower’s inauguration and Presidential ball, which he accepted.

He appeared on the ballot one more time, in 1961, running for Governor as the Veterans Bonus Now candidate (3904 votes, fourth place).

Despite the stunts, jokes, and good humor, Krajewski was serious. He wanted to prove to America and the world that a poor man could be president. Perhaps this was absurd. More important was his knack for caricature. Thayer noted Krajewski’s “an uncanny eye for all that is ludicrous, ironic, and idiotic about American politics.” His gross exaggerations of conventional politicians’ antics mocked their absurdities. Thayer suggests that the press missed the point and wrote off Krajewski as just another pleasant screwball. However, the Jersey politicians who kept him off the ballot apparently found him a burlesque of themselves, which they didn’t appreciate.

Thayer thought Tammany Hall, Krajewski’s tavern in Secaucus, “was the best reflection of his political career.”  It specialized in Polish beer and kebasy, with straw hats nailed to the ceiling. A perpetual stream of men stalked around its battered pool table. “Framed on the walls,” Thayer wrote, “were Krajewski’s political memorabilia: newspaper clippings, photographs, bumper sticks, and campaign literature. Among these mementos was a 45-rpm record of campaign music called ‘Hey! Krajewski! Hey! Hey!’ by Bernie Witkowski and his Silver Bells.” He advertised his tavern and his campaigns with an old white box trailer in his parking lot, visible to passengers on the old Pennsylvania Railroad mainline nearby, that read: “Politicians are Jokers.”

When Thayer interviewed him in late 1965, Krajewski suffered from diabetes. His right leg had been amputated above the knee in August, 1965. Yet he remained warm, good humored, and high-spirited.

In 1966, he announced for U.S. Senator on an anti-sales tax platform. But his health collapsed, he didn’t qualify for the ballot, and died of heart failure on November 8, 1966—Election Day. He was 54 years old.