The online #Resistance revolutionaries sign on, but not the Permanent Government, which hopes for a restoration. 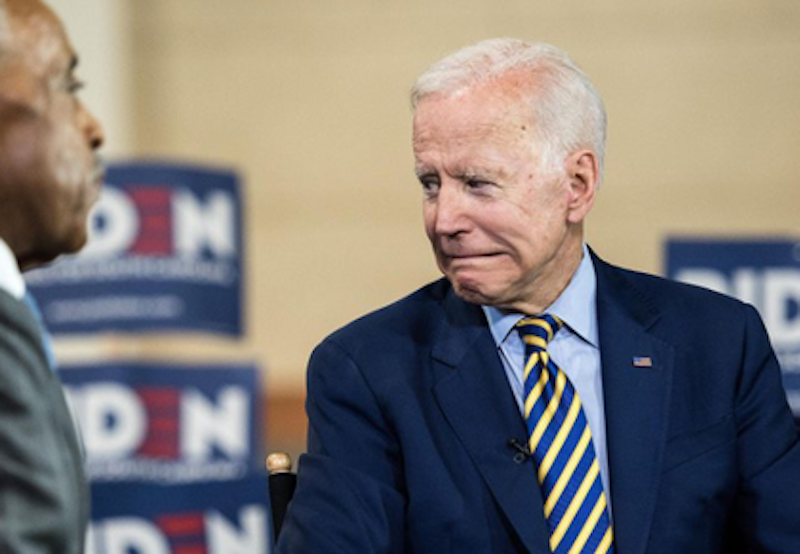 New York Times op-ed columnist Ross Douthat (a putative conservative) had one interesting nugget in his otherwise wishy-washy essay about Joe Biden last Sunday. A reader had to wade through Douthat’s unoriginal thoughts on Biden—how his black support might erode if, say, Cory Booker goes on the offensive; the “progressive” candidates ganging up on him to veer left; and the standard man-out-of-time, maybe he’s losing his marbles, a guy who was/is too “handsy” with women and even adolescents. Standard fare that you could read 50 times a day in a media’s that inordinately consumed with a Democratic primary fight that won’t really begin in earnest until the fall. (I wonder about fatigue setting in among the electorate with all this breathless early coverage—every poll parsed by partisans, visits to Iowa, South Carolina, Pennsylvania, Florida and New Hampshire put under the microscope—and if it’ll result in a lower than expected turnout on Election Day in November, 2020.)

However, Douthat’s last paragraph is (probably inadvertently) worthy of consideration: “But in the rising line of Elizabeth Warren’s polling support, and the flat or falling lines of all the other non-Biden candidates, you can see at least the beginning of how NeverBiden might unite, and win.”

This is spectacular: how will the #NeverTrumpers play with the #NeverBidens? Not well, I suspect, since a charter member of the former group, Douthat’s colleague Bret Stephens, essentially endorsed Biden on June 21, and Max Boot and Bill Kristol can’t be far behind. Stephens wrote, in reaction to the #NeverBidens: “They want to be the excommunicators. Biden shouldn’t let them. Civility is never a vice among fellow citizens, especially when it’s in short supply. The last thing Democrats need is to allow the nasty left do to them in 2020 what the nasty right did to Republicans in 2020.”

Anecdotally, I met with one of my oldest friends here in Baltimore last Friday morning, a delightful two-hour animated chat at an outside café (if you can call Starbucks a café without verbal repercussions) that was mostly updates on family—we both come from large broods—spurts of 1970s and 80s nostalgia here and there, ticking off various infirmities as we’re both over 60 and, finally, politics. My friend, who broke ranks with his generation by voting for Ronald Reagan over Jimmy Carter in 1980, despised Bill Clinton, and generally a steadfast economic/foreign policy conservative, was a confirmed #NeverTrumper in 2016, and voted for Hillary Clinton.

I’m ambivalent about Trump: he’s aesthetically an abhorrent, seemingly uneducated (in the academic sense) boor who’s the very antithesis of the storybook idea that presidents are role model for kids, someone to look up to, although with the exception of Barack Obama, I can’t think of anyone who fit that impossible bill since JFK. And though I can’t fathom supporting Trump, I’m equally disdainful of all the Democratic candidates. I love Bernie Sanders’ no-bullshit speeches (and his accent) and believe he’s likely the most honest candidate in the field, but his quasi-socialist policies are for the birds.

Which means, like in 2016, I’ll go for whatever tomato can the Libertarian Party puts up. Perhaps that’s cynical, but I also don’t believe that Trump is a totalitarian or Nazi—as the excitable online revolutionaries never tire of bleating—and win or lose, politics is cyclical, and he’ll be done soon enough. I’m glad Trump’s talismanic “Wall” is mostly a charade, although his “detention centers” for immigrants is a disgrace.

In any case, I asked my friend who he’d cast his vote for, and he instantly responded, “Biden. He’s the most conservative Democrat running and won’t mess up the country.” He has no real interest in Mayor Peter, Booker, Kamala Harris or Beto, but did admit that should Elizabeth Warren gain the nomination he’ll either vote for Trump or sit out the election.

It’s this sort of thinking that’s led me to believe I was wrong earlier in the year, first, when I wrote that Biden wouldn’t run, and second that his advanced age (for the demanding job of president) wouldn’t sit well with potential voters. I definitely didn’t anticipate that Biden, an absolute Zero, who’d be a footnote now were he not Obama’s meandering Veep, would be as popular as he appears to be right now with all that “Uncle Joe” malarkey that’s way over my head.

In fact, it’s Trump who’s Biden’s Ace of Clubs since the incumbent has immunized all candidates from gaffes, flip-flops, lapses into incoherence, and #MeToo problems. (And, let’s not forget, it was Bill Clinton, with his risky women business that let Trump largely off the hook in the last campaign). In addition, although Biden’s son Hunter, a tabloid star with his bed-hopping—including his brother’s widow, no less—and shady business deals isn’t really a problem for his father since Trump’s sons Donald Jr. and Eric are so despicable that Hunter Biden is just another Billy Carter, Roger Clinton or Donald Nixon.

Should Biden prevail in the primaries, he’ll receive support from a large percentage of his current detractors. Very liberal Times columnist Michelle Goldberg said as much on June 24: “Seeing Biden on the stump [in South Carolina] often feels like watching an actor who can’t quite remember his lines. Even if you don’t support him, it’s hard not to feel anxious on his behalf… Donald Trump, of course, also speaks in gibberish, but with a bombastic unearned confidence; rather than flailing around for the right figure he makes one up. Biden, by contrast, was just shaky.”

Goldberg is flailing herself, and I think she knows it. Typically for Beltway political preachers, she condescends to the country’s citizens, writing, “It’s true that ordinary voters don’t seem to care about [Biden’s] gaffes that obsess cable TV commentators… Anyone convinced that Biden is the safe choice should go see him for themselves.”

Yes, that makes sense! The “ordinary” voter will skip work and family obligations to join the media at a rare Biden appearance. The Democratic race will turn somersaults several times before a nominee is chosen, but given Trump’s precedent-setting upset of the traditional cheese cart, I can’t think of a single scenario where Biden so sullies himself that he drops out. Which will delight the #NeverTrumpers and flummox the #NeverBidens.