The March for Life, Christopher Hitchens and the problems with pro-choice. 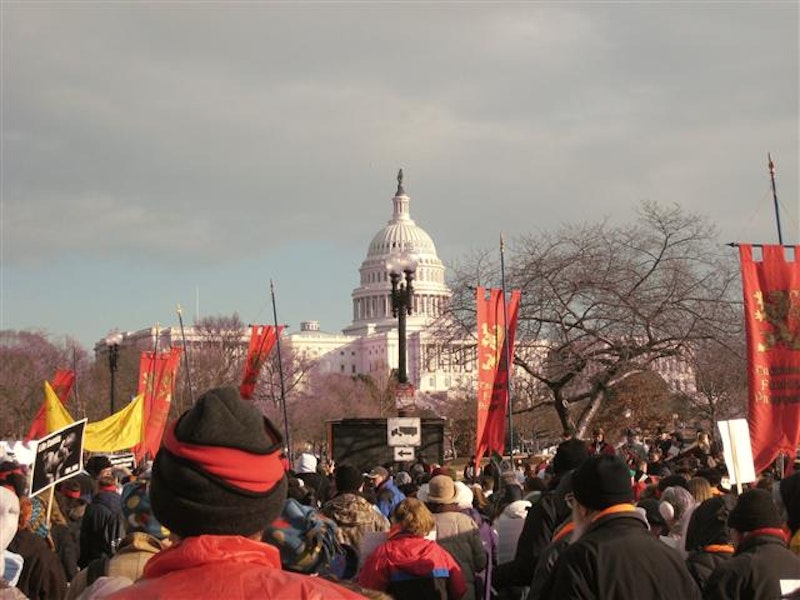 Washington, D.C.'s March for Life over the weekend served as grim reminder that we're coming up on 40 years since the Supreme Court made abortion-on-demand the law in all 50 states. The death toll has been somewhere in the neighborhood of 50 million unborn; well, it's hard to know what to call them exactly. Pro-lifers prefer children or babies. Pro-choicers prefer more clinical terms such as fetus or zygote, to take the sting off it. No mother ever speaks of holding a zygote in her arms. Worse, these are not 50 million dead that otherwise would have been born.

Research by the nominally pro-choice Guttmacher Institute confirms what many long suspected: Women use abortion as a form of retroactive birth control. According to Guttmacher, of the all the women who will have abortions during normal childbearing years, "Half have had at least one previous abortion."

The pat liberal answer to this is, of course, more condoms for everyone, and more subsidy for birth control, as if both were not already widely available and relatively inexpensive. People in a country as rich as the United States have unprotected sex because they want to—because condoms are annoying and taking the pill requires planning and discipline. Obamacare, if it comes to bloom, will simply rubber stamp this regime and expand it. The Department of Health and Human Services has granted a one-year reprieve to religious organizations before it starts enforcing an edict that they must provide funds for sterilization, abortifacients and contraceptives in all their basic healthcare packages.

The very quotable Timothy Dolan, head of the U.S. Conference of Catholic Bishops, summarized the decision: "The president is saying we have a year to figure out how to violate our consciences." Some readers at this point will object to what Dolan says purely because of who said it: the patriarchal, privileged head of an all-male, celibate priesthood; the spokesman for a point of view at odds not only with modern mores, self-satisfied progressive snobs never tire of reminding us, but with a super majority of self-identified Catholics. Dolan comes from an institution that gave us the Inquisition, pedophile priests, and Opus Dei. So forget him, if one need edit.

Fine, let us forget him and focus on the real issue that weighs us down, that warps our legal system, and that requires us to do spectacular linguistic acrobatics. I often wonder if people are pro-choice simply because of the company they'd have to keep if they started using the word "baby" instead of "fetus." It's not a historical accident that Catholics and Mormons and Baptists and Orthodox Jews ended up largely on one side of the abortion question, but it should be. One can furnish something approaching infallible evidence for this proposition. If anybody could be said to have views on this subject independent of religious influence, it is the late Christopher Hitchens. Hitchens was the furthest thing from what he contemptuously called "God-botherers." He loathed organized religion and argued for its extinction. And he was, uncomfortably and tentatively, in the pro-life column.

In early 2008, Hitchens was debating at Stanford. He capped off what he considered a particularly good point by saying, "The religions that say you should admire infanticide as proof of the love of God have no claim. No! Claim! At! All!" [he pounded his fist on the podium with each word for emphasis, and then took his voice down a register] "to be preaching ethics, let alone morality." Interlocutor Ben Stein threw a spanner in the works in the follow-up by asking Hitchens, "Are you involved in the pro-life movement in that case?" Hitchens replied with less eloquence than usual, but he eventually got there: "Um, I believe that the concept unborn child is a real concept, yes. And I've had a lot of quarrels with some of my fellow materialists and secularists on this point. I think that if the concept child means anything, the concept unborn child can be said to mean something. And actually all the discoveries of embryology, uh, which have been very considerable in the last generation or so, and of viability, appear to confirm, uh, that opinion. Which is—I think it should be innate in everybody, is innate in the Hippocratic Oath, is instinct in anybody who has ever watched a sonogram, and so forth. So yes, is my answer."

The most telling part as he stumbled toward yes was Hitchens' contention that certain instincts kick in when you watch a sonogram. He saw that this is not an undifferentiated lump of cells but rather a very small "unborn child," and thought that to deprive it of life for no good reason was a problem. In changing his thinking on one of the most contentious issues of our era, Hitchens was simply picking up the intellectual gauntlet thrown down by his intellectual hero George Orwell: "To see what is in front of one's nose needs a constant struggle."