The Republicans' Debate on Healthcare Repeal Was Shameful 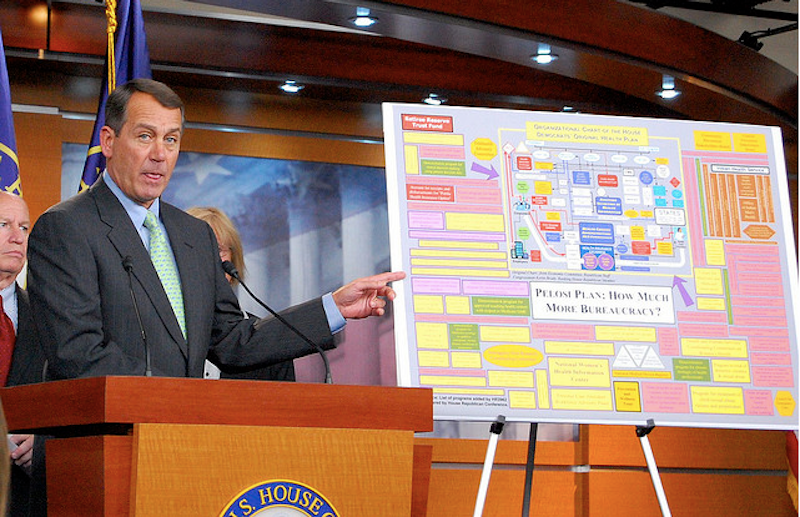 Defense Secretary Robert Gates once explained during a press conference that one of the military’s great challenges is combating Al-Qaeda’s disinformation-based propaganda. The enemy, according to Gates, has the upper hand because they don’t have to waste any time getting their facts straight. They can just claim whatever they want on their websites and have an infinite supply of recruiting stories. In the West, however, we pride ourselves on pursuing truth, which requires greater exertion and integrity, and this is why Gates sees the ideological battle as an uphill climb.

Many people don’t know that Gates considers himself a Republican. And judging by Wednesday’s House health care repeal debate, it’s easy to see why. The Republicans’ utter contempt for facts is shocking. And their refusal to share America’s Defense Secretary’s values is shameful. Watching their performance was a lot like watching Sean Hannity or listening to Rush Limbaugh (which cannot be a coincidence). Nearly every talking point they put forth was patently false and mean-spirited, illustrating the sad reality that today’s mainstream conservatives believe that if they repeat the same falsehoods over and over they will somehow become true.

Rep. Bob Latta began by calling “Obamacare” a “government takeover,” an infamously discredited smear pushed by many House Republicans. Matters deteriorated even further when he charged that the Affordable Care Act would harm America’s economy more than any other law in U.S. history, and that reform has already decreased hiring. As the nonpartisan factcheck.org reports, all Republican claims about the “job killing” bill are at worst gross distortions and at best reliant on self-serving omissions. The House leadership has consistently misrepresented a CBO report by claiming that it calculates reform will eliminate 650,000 jobs when in reality it predicts the impact on the work force “will probably be small.”

When confronting the inescapable fact that the CBO has unambiguously concluded that reform will reduce budget deficits by roughly $143 billion over the next decade and warned that repeal would add $230 billion to the debt, the Republicans all of a sudden consider these statistics “smoke and mirrors,” cobbled together by “Enron accountants.” Rep. Leonard Lance decided that the law will provide no benefits and add $700 billion to deficits over 10 years, and Rep. Phil Gingrey argued that those pushing for reform on the grounds that it will provide coverage for people with pre-existing conditions are exaggerating. Their ideas are also based on “smoke and mirrors” calculations because most patients with pre-existing conditions don’t really have serious illnesses.

Rep. Bill Cassidy offered another tough reality check in describing what he called “the illusion of coverage.” People may think reform will provide more coverage through Medicaid but the truth is deficit wary states have been steadily cutting funding, and adding millions of new patients to the program would only make matters worse. He expediently neglects mentioning that under the new laws the federal government will pump hundreds of billions of dollars into state budgets to smoothen the transition. Rep. Gregg Harper omitted the same crucial fact in his diatribe about how reform will prove “oppressive” by saddling states with inflexible and unaffordable mandates.

America is going to learn what it means to be governed by the party of Fox News and Rush Limbaugh. When Speaker of the House John Boehner can claim with a straight face that the CBO budget calculations are just “their opinion” and that we should believe the conservatives’ blatantly partisan predictions, there’s something wrong (let’s not forget that this is the same man who has described the legislation as “Armageddon” and possibly a shift towards state sanctioned eugenics). When House Republicans such as Rep. David McKinley promulgate the discredited accusations that reform will cut $500 billion from Medicare and “exempt” members of Congress from its provisions, we should all be incensed.  Unfortunately, America has not elected any Republicans who share the ideals of Defense Secretary Gates.