Now, a look back at his wholly inconsequential political career. 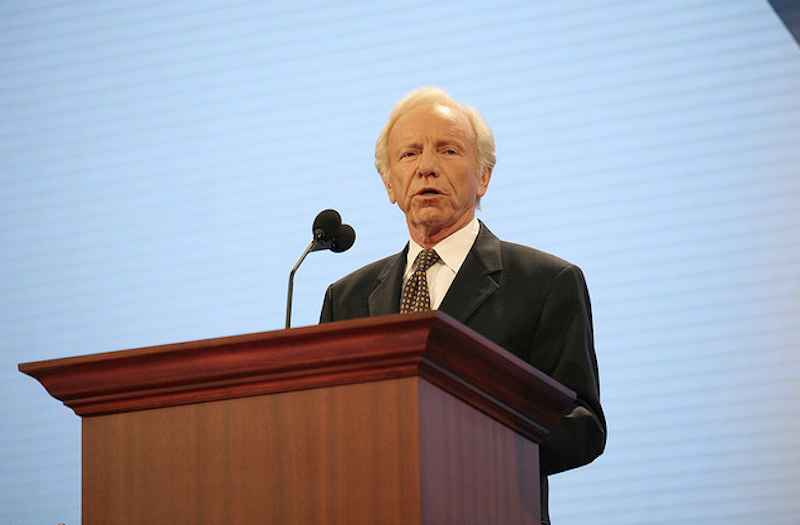 Joe Lieberman, the onetime Democratic nominee for vice president-turned-independent who managed to transform a mildly successful career in the Senate into a punchline in just a few short years, has announced that he won’t be running for re-election. And as a resident of Connecticut, which Lieberman nominally represented, I say good riddance.

The lugubriously-voiced Lieberman lost his way after the Gore/Bush election of 2000, mounting a quixotic presidential run of his own in ’04 and then deciding, after losing the 2006 Democratic primary in CT—but winning reelection anyway under the “Connecticut for Lieberman” banner—he was actually an independent at heart.

This would have come off more convincingly—and less like a cynical, anything-to-stay-relevant move, a la Arlen Specter’s switch from Republican to Democrat—had Lieberman proven to be a firebrand about much of anything. But you never got the feeling that Joe’s pulse rate moved higher than 60. The stentorian attitude didn’t help, but even when it came to legislating, Lieberman was hardly what you’d call rambunctious.

And about that legislation … what, exactly, were the impactful positions that he took? He supported the U.S.-Israel relationship. He supported abortion rights and the rights of gays and lesbians to adopt children and to serve in the military. He supported free trade. He was a hawk when it came to the war in Iraq. He felt that violence in video games and on TV was something to be concerned about.

Is your heart racing yet?

Dick Cheney easily mopped the floor with Lieberman during their one vice-presidential debate in 2000, while the Bush/Gore debates routinely ran much closer. The subsequent Supreme Court ruling for Bush seems to have sent Joe into a crisis of faith: First there was the infamous “We’ve got Joe-mentum” claim during the ’04 Democratic primary in New Hampshire (in which he finished fifth out of six contenders), then the ignominious defeat in the ’06 Connecticut senatorial primary by the previously politically untested Ned Lamont.

Lieberman was able to rally the CT faithful by raising the specter of a Republican taking his seat (made all the more real by Lieberman’s own decision to run in the general election against Lamont and Republican Alan Schlesinger), but the damage had already been done; at a Labor Day parade I attended that year, Lamont and even Schlesinger received polite, if not raucous, applause, while smilin’ Joe withstood roughly equal amounts of cheers and boos.

He then decided he was a capital-I “Independent,” and rewarded the CT Dems for their non-support by addressing the Republican Convention in 2008 and endorsing that other stick-by-your-principles icon, John McCain (and the impact of that endorsement speaks for itself).

From there he’s been doddering along in the Senate, a man who claims he operates under his own convictions but evinces very few. Neither Democrats nor Republicans fully trust him, and it’s hard to think of another Senator who went from his party’s VP candidate to essentially persona non grata in less than a decade. (Well, there’s always Spiro Agnew, but he was a special case from the get-go.)

The official line is that Lieberman’s exiting the stage now after feeling he’s accomplished his mission (whatever that was, exactly; warning parents about the evils of Grand Theft Auto?). The reality is that Lieberman finally came to realize that, having annoyed even people on both sides of the aisle, his chances for re-election in 2012 were slim. A survey of Connecticut voters taken in late October put Lieberman’s support at 24% of Democrats, 34% of independents and 48% of Republicans—an appropriately mixed picture.

Lieberman will reportedly go out by quoting from scripture; specifically, Ecclesiastes 3:1: “To everything there is a season, and a time to every purpose under Heaven.”

To which The Byrds, echoing his wishy-washiness, might append: “Turn! Turn! Turn!”