The Good, the Bad and the Russia

A review of Ian Frazier's Travels in Siberia. Grade: B+ 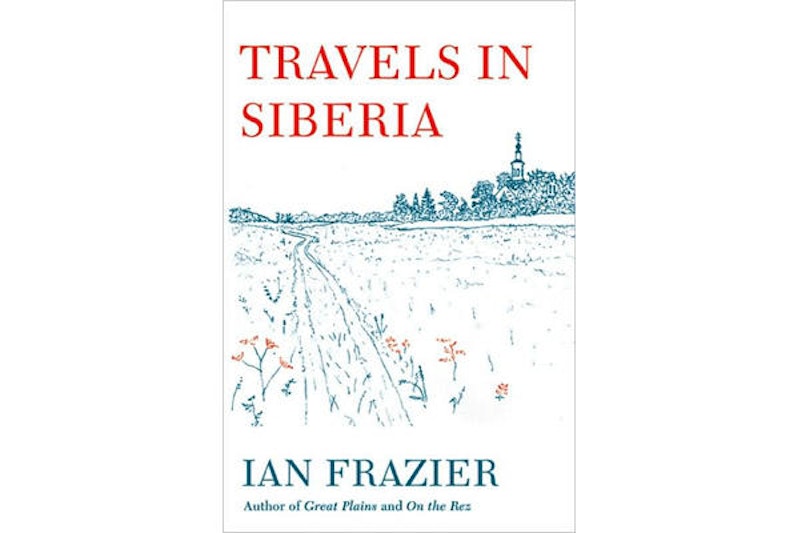 Travelogues can be like looking at the vacation pictures of someone you don't really know that well: only mildly interesting by virtue of the locale and likely to elicit a low-grade jealousy. They are generally not among my favorite books to read. But Ian Frazier's Travels in Siberia is much more than just a travelogue.

Compiled from about a decade and a half of travel through and around the eponymous region, including a five-week, 9000 mile summer road trip in a van with two locals of similar disposition and a winter trek across frozen river roads to encounter Siberia's infamous cold, the book uses Frazier's personal experiences as a framework to discuss everything else about Siberia. And I do mean everything. The book could easily function as a textbook. From the Mongols to the tzars to the Soviet Union and the modern day oligarchs, Frazier neatly ties the last millennium of Russian history to his first-hand accounts and also manages to cover a solid portion of literature and geography.

The book never becomes dry or pedantic and is an evocative pleasure to read throughout. Assisted at times by reproductions of Frazier's sketches, images of the wild Russian taiga, the mind-bending expanses of the steppes, and the sparkling beauty of Lake Baikal become clear. Frazier also has a knack for subtle humor, particularly where interactions with Russians are concerned. About a fellow train passenger, he writes:

He saw me, broke into a huge grin, and made the do-you-want-a-shot -of-vodka? gesture, tapping his throat below the jaw with a flip of his fingers. From his car he pulled a half-full bottle of vodka to show me. I shook my head politely; it was about eight in the morning.

The expansive reach of the book gives it a meandering pace that can drag at times, but for the most part it is a fascinating look into a part of the world we don't see much of, despite its size. Frazier, a regular contributor to The New Yorker, presents both the positives and negatives with simple honesty, filling the pages with anecdotes from his travels. But more often than not, it is hard to untangle the threads of good and bad, and Siberia, as befits a place with no exact dimensions, defies simple definition.

A poacher expresses his condolences on September 11 with a lovely, illegally caught salmon. The mounds of trash piled along the road are an inescapably ugly part of the scenery, but allow Frazier's guide to make impromptu repairs on their van with bits of metal scavenged from them. A trip to one of Stalin's infamous labor camps reminds the author how far his boyhood in Ohio was removed from the experience of the convicts there, for all that the camp was closer to the US border than to Moscow. Frazier battles swarms of mosquitoes of biblical proportions, bouts with food poisoning, aphasia, suspicions about the motives of his guides, toxically dirty restroom facilities and several brushes with death, but still comes out with his self-confessed Russia love undiminished.

Through the exhaustive research Frazier has done, almost as much as the care with which he's crafted his words, readers can see both that he is besotted with Russia and that he's a little befuddled about why that should be. In his passion for his subject, he reaches out to all sources, historic, academic and human, to try and answer the driving question for those afflicted with his disease: how can Russia be so great and so horrible simultaneously?