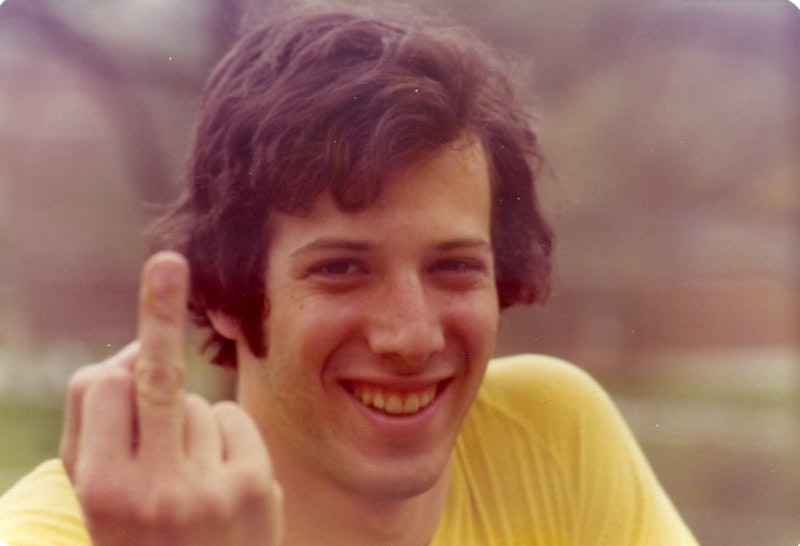 Some may remember Bob Dole, at the end of his futile 1996 presidential run against Bill Clinton, saying at a campaign rally—referring to multiple Clinton White House scandals—“Where’s the outrage?” Nowhere, really, since Clinton thumped Dole. The longtime Kansas Senator (now 95), if he’s paying attention, must surely shake his head today and wonder if social media might’ve put him over the top, since there’s nothing but outrage in 2018.

The online pandemonium, which reached a crescendo last Thursday during the back-to-back Christine Blasey Ford/Brett Kavanaugh Congressional hearings (impossibly surpassing the day after Trump’s election), isn’t confined to one political viewpoint. Most of it’s vile in a way that couldn’t be imagined a decade ago, but everyone wants in.

I didn’t follow much of the back-and-forth last Thursday—Twitter comments like “I’m deeply concerned that democracy has died today,” are so stupid that I haven’t the time—but did notice a tweet from noted author/journalist Susan Orlean that simply read, “I’m so tired of old white men.” Although I haven’t seen Orlean in more than a decade, I admire her work (particularly Rin Tin Tin) and she was an enthusiastic reader of my New York Press in the 1990s. We met at a weekly newspaper convention in Portland, OR in 1982, when I ran Baltimore’s City Paper and she wrote for Willamette Week. She went on to the Boston Phoenix and then The New Yorker, and is perhaps best-known for her book The Orchid Thief, which Hollywood picked up for the film Adaptation, and Meryl Streep was nominated for an Oscar for her portrayal of Orlean.

Anyway, I thought Susan’s tweet was odd—she was born the same year as me, 1955, and is white, as is her husband, who’s a few years older—but chalked it up to a “heat of the moment” reaction of disgust as the oily Kavanaugh testified. I don’t often delve into long Twitter threads, but did this time, and was repulsed by the comments directed at her. I tweeted that Susan’s a wonderful writer, and woman, who, like many typing too fast, made an emotional statement. The tweet was deleted on Friday, so I can’t give exact examples of the vitriol directed at me for defending her, but the imbecile factor was astonishing. One person said Orlean was “carried” by the “shitty” New Yorker and deserved nothing but scorn. And on and on in that vein. As is common on Twitter and Facebook, the grammar was atrocious, and I doubt 95 percent of those weighing in had ever read a word of one of Orlean’s books or hundreds of articles.

Orlean, ill-advised or not, took the bait of people commonly called “haters” and tweeted (this one survived) later, “Trying to insult me by saying I am a ‘failed writer’ isn’t going to work.” Before others came to her defense, the fusillade began. A few examples:

“How about ‘decrepit and haggard failed writer’”.

“You are such a failed writer… the world is watching this show Sussie. I have one word for you… Military Tribunals.”

“There’s nothing to be ashamed of, there are many failed writers who work at Starbucks.”

“You’re not going to sit idly by? What exactly do you think you’re going to do? We are armed, we are prepared & we the people are so looking forward to you & your limp wristed soy drinking friends trying ANYTHING to stop our Potus.”

Not exactly a reminder of debate and repartee between politically-opposed men and women long ago on Firing Line, Dick Cavett, Steve Allen or in the pages of the Village Voice.

A colleague of mine last weekend suggested that the Kavanaugh/Ford hearings will be enshrined in history as a “Do you remember where you were when…? event. That’s overstating its significance, I think. In the past 80 years there have been just three such instances, two of which I was alive for and recall without fail: Pearl Harbor, JFK’s assassination and 9/11. Whether or not Kavanaugh is confirmed—as I write there’s no clear answer—it’s simply not on the scale of the three above historical touchstones.

Besides, the public’s attention, so overloaded to the point of news exhaustion, is minimal. That fact, helped in part by media decimation and reader/listener distrust—paltry fact-checking, TV stations that preach to the converted, shrinking newspaper staffs—has seeped into the culture to such an extent that it’s now mentioned in contemporary fiction, even if tossed aside in a throwaway paragraph.

For example, in Stephen Markley’s searing novel Ohio, published this year, in describing a botched act of terrorism visited upon a mosque in Columbus, OH, which left three people injured and one dead, the author writes: “The incident certainly vanished from the national outlets quickly, buried under the news cycle’s accelerated avalanche. Even the hometown paper The Columbus Dispatch found that reporting on the subject had an adverse effect. Daily circulation and website traffic declined noticeably whenever they ran front-page news about the case, and editors learned to keep any updates relegated to the interior of the paper.”

I’d quarrel with Markley’s description on two fronts: one, the “kill count” wasn’t high enough to sustain interest; and two, who reads the “interior” of a newspaper anymore? Nevertheless, the thrust of his opinion is now commonplace.

One other beef of mine was reinforced last week: the absurdity of lifetime SCOTUS appointments and lack of an age limit for members of Congress. (Isn’t 15 or 20 years enough for a Supreme Court justice?) I think 80 is a reasonable cut-off, an age when a relatively small amount of people can withstand the rigors of a demanding job. You only have to remember the farce of Strom Thurmond reelected as South Carolina Senator in 1996, in his 90s, (likely incontinent and snoozing in the Senate chambers) to come around on this reasonable suggestion. Why is Dianne Feinstein, at 85, running for reelection in California? The Democrats have no one spryer? Why are (very) senior citizens like Republican Orrin Hatch still answering the call for a Senate vote? I think teenager David Hogg has become a grandstanding attention whore, but he’s not wrong that America’s youth isn’t served well by men and women who’ll be deceased when some of the legislation they pass comes to fruition.