Never Trumper is now a Rarely Trumper, tries to explain why. 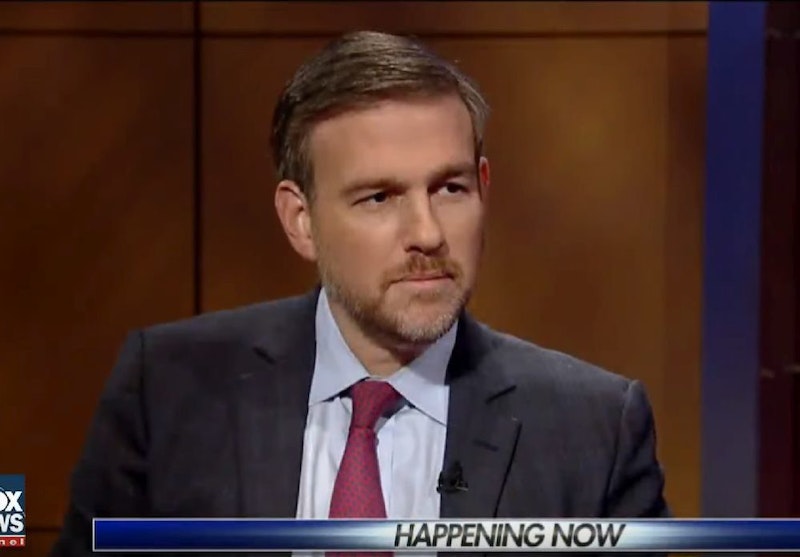 You know who you need at a time like this? Donald Trump. Bret Stephens thinks so. His new column at The New York Timesinforms us somebody has to say the hell with it and swat aside the canting bad faith that’s been mobilized against Brett Kavanaugh. Stephens left The Wall Street Journal editorial board because the paper signed on with Trump and Stephens wouldn’t do it. But that was then. With the fight over Kavanaugh’s Supreme Court nomination, Stephens has been reminded that there’s something bad enough to call for Trump as an antidote. Why, friends or acquaintances were asking Stephens about going to prep school and what it was like. They “quizzed” him, he says. These are crisis times.

Stephens pegs his Trump adjustment to eight moments. Being asked about prep school was number eight. Three of the other points involve hearing Democratic senators make talking points. Another was the Julie Swetnick interview. Another was a headline on an op-ed in The Los Angeles Times. Another was seeing news stories about the young Kavanaugh’s behavior around beer. And the lead-in point, the one he starts with, is a friend’s thoughtful remark: “I’d rather be accused of murder than of sexual assault.”

These points are lint. Or, to try a metaphor, they’re iron filings. They’re chips and bits that cluster about a magnet, this magnet being Stephens’ sense of conservative resentment. Once they’ve flown into shape, he mistakes the shape for a thought. He fiddles with his word-displays (“a big fat hammer fending off a razor-sharp dagger”). Meanwhile, his reasoning function is disabled. An example: “Uncorroborated plus uncorroborated plus uncorroborated is not the accumulation of questions, much less of evidence,” he announces. “It is the duplication of hearsay.” Not in this case. The allegations by Ford, Ramirez, and Swetnick are testimony. Testimony is when you say what you saw (or claimed to have seen). Hearsay is when you repeat what you heard somebody else describe. Testimony plus testimony plus testimony can add up to a lot of questions, as it has here. I expect that pre-law students at Ohio State understand testimony versus hearsay. So do columnists at The New York Times, when they want to.

But let’s go down Stephens’ list of moments. The op-ed headline: “Boo Hoo Hoo. Brett Kavanaugh Is Not a Victim.” Cold-blooded! “Since when did the possibility of innocence become, for today’s liberals, something to wave off with an archly unfeeling ‘boo hoo’?” (Let’s pause to induct “an archly unfeeling ‘boo hoo’” into the bow-tie hall of fame.) Well, going by the evidence here, a member of the LA Timescopy desk decided to get frisky with “the possibility of innocence” just 11 days after the Ed Whelan affair. That little business saw Whelan, the head of a right-wing think tank called the Ethics and Public Policy Center, issue a series of tweets that fingered an unoffending private citizen as the supposed real perpetrator of the Blasey Ford assault—fingered him by name and with no evidence except a snap shot of the man’s face. Whelan correctly felt ashamed of his behavior and is now on leave. But if an archly unfeeling copy editor damns the liberals, I’d expect Whelan’s behavior to be triply damning for the pro-Kavanaugh forces.

Next, we have Sen. Cory Booker saying that Kavanaugh is damaged goods and somebody else should be nominated. To paraphrase: “You guys really ought to quit now.” Competitors say that kind of thing to the other side. But from the comment Stephens derives a playbook. “Elide the one question that really matters; raise a secondary set of ‘questions’ that are wholly the result of the question you’ve decided to ignore; call for ‘another candidate’ because it will push the confirmation hearings past the midterms,” he says. What eliding and what ignoring? The Democrats, including Booker, want the FBI to look into the Ford–Ramirez–Swetnick allegations good and hard. Republicans seem more dubious about that step.

The news stories about young Kavanaugh and his drunken loutishness. Stephens can’t believe that people are bringing up this stuff. He doesn’t quite reckon with who’s bringing it up: people who were there and who say they’re disgusted to hear Kavanaugh indulge in falsehoods—“blatant lying,” in the words of Yale classmate Lynne Brookes (“I drank to excess many nights with Brett Kavanaugh”). Upon listening to Kavanaugh’s testimony about drinking, “I cringed,” reports Chad Ludington (“Brett was a frequent drinker, and a heavy drinker. I know, because, especially in our first two years of college, I often drank with him”).

The next item is footage Stephens saw of Sen. Richard Blumenthal, who’s been exposed in lies about his service record. Our columnist is grateful that Trump said Blumenthal’s the wrong person to talk about, say, the legal principle of falsus in omnibus (“false in one thing, false in everything”). But this is like being grateful there’s a toxic dump to counter the smell of dog shit—you have to really hate that dog. Stephens doesn’t say Blumenthal is wrong about falsus in omnibus or that the principle shouldn’t apply in the Kavanaugh case. It’s just that the guy’s Blumenthal, the Democrat liar. Similarly, who is Dianne Feinstein to ponder the temperament of red-faced Judge Kavanaugh (or Mr. Goes Around Comes Around, as I think of him) when she’s unrepentantly Dianne Feinstein? After all the Senator “gamed the process,” Stephens tells us, leaving out how she did so or why we should believe him. The accusation is enough, so to speak.

Then the wind-up item, prep school. People have been asking Stephens about going to prep school, asking him as if he must know something “about elite prep schools and the mentality of the boys who attend them.” He points to nothing hostile or rude about the questions, just to their existence. Yet they’ve got his back up. Because of these questions he warns us against “the facile stereotype of ‘white privilege,’” which he calls “yet another ugly tactic” used against Kavanaugh. Really, the man seems on edge. Look at the first item on his list, which I’ve saved for here. Even above the ardently unjust or redolently aghast LA Times headline, we have the sober-minded friend with his thoughts about murder accusations and sex accusations. “I’d rather be accused of murder than of sexual assault,” the friend says, and Stephens waves us to a moment of grim reflection. False accusations of sex assault are no joke, he tells us. No, they aren’t. But we have reason to think that Kavanaugh’s facing some true accusations.

Here are three reasons: Blasey Ford put the accused’s friend in the room as sole witness to the alleged assault, which seems an odd move for a fabricator; a look at the data on false sex assault claims indicate that they’re made by people with long track records as liars, something that Blasey Ford and Ramirez, at least, don’t seem to have; and Kavanaugh, in defending himself, has made a series of truth claims that have begged correction by people who know him, with at least one of these claims being an insult to the intelligence (I refer you to “Renate alumnius”).

These reasons and all others fail to appear in the Stephens column, as do any rebuttals to them. When landing on Cory Booker, Stephens says the truth of the assault claims is “the one question that really matters.” But the question then slips his mind. His column is all about not liking the tone of the other side and deploring their attitudes. Running through it is a streak of victimhood that causes him to open his list with threatened men and to close it with decentered preppies.

Of course, Stephens has no use for the “ugly and gratuitous way” Trump talked about Blasey Ford a few days back. He’s no deplorable; he’s a conservative intellectual with principles. For what that’s worth. Because, somehow, he doesn’t figure that the Trump remarks show anything about Kavanaugh and his cause, whereas an op-ed headline says tons about the other side. In the past Stephens has said hard things about Trump, including that Trump’s big mouth will get journalists shot up by a lunatic. But right now he likes Trump’s big mouth because people have the wrong outlook about prep-school boys. I’d say Donald Trump is the friend of white men who feel threatened by justice, and that Stephens should think about why he now appreciates him. But Stephens isn’t in a thinking mood.