The World Is Too Much With Us

Anti-globalization then and now. 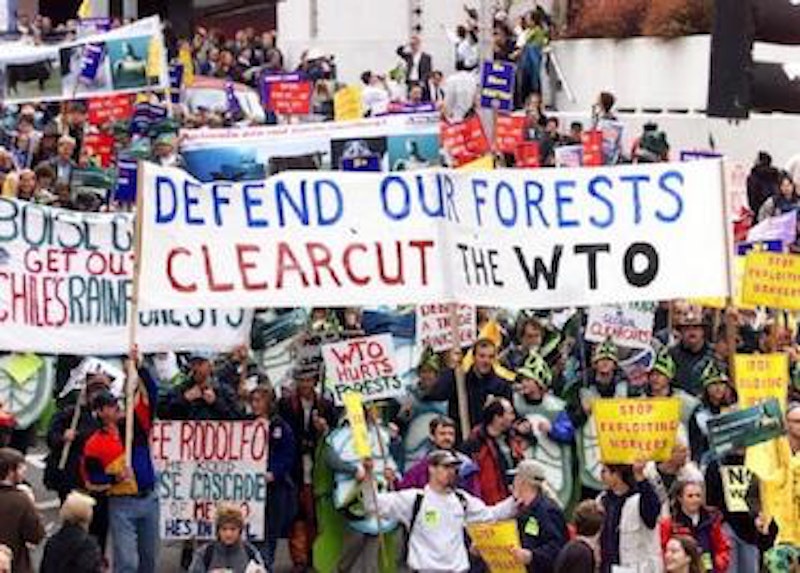 Last month was the 30th anniversary of the 1988 anti-IMF/anti-World Bank protests in West Berlin. (That anti-capitalist protest movement started slightly before Europe had even shrugged off Communism.) Next year is the 20th anniversary of the eruption of the anti-globalization cause into American consciousness with the Seattle riots of 1999.

Yet in 2018, longtime anti-globalization activist Sander Hicks, who has just re-launched the leftist newspaper New York Megaphone, finds himself, he told me, agreeing ever so slightly with Donald Trump on the problems with international trade agreements such as NAFTA (the old one, that is, which Trump has now replaced with a new one that will not necessarily be better). Rest assured, that narrow area of agreement doesn’t prevent Hicks from cataloguing nearly every crime and act of wrongdoing with which Trump has ever been charged in the useful front-page first article of the first new Megaphone (it has not become MAGAphone).

But it’s funny how things change in a couple decades. Sometimes, issues shift from left to right depending on which faction is in power—with the one out of power usually rediscovering some libertarian tendencies and the faction in power suddenly seeing the wisdom in having a powerful central government or stable establishment. But that doesn’t account for all valence reversals.

Meanwhile, though, the likely left-leaning editors of Reddit have recently “quarantined” one of the main 9/11 conspiracy theory subreddits, that topic now probably seeming crazier to them than the pronouncements of the Deep State agencies they once despised.

As for me, I’m paranoid enough about the aspects of government we know for sure exist without spending too much time worrying about its more speculative purported crimes. And there’s never been too much chance of me liking either the left-wing or right-wing version of anti-globalization, since I don’t want to see either foreign trade or foreign peoples squelched.

In fact, I was in India during the 1999 Seattle anti-globalization fracas, and the Indians I talked to seemed more worried about the idea of the U.S. cutting off trade with them than they were about being oppressed by the World Bank—but then, many international institutions thought of as parts of capitalism, including the World Bank, are actually governmental institutions, so I’m happy to get rid of them, so long as the idea is not to replace them with outright socialism or protectionism.

And if people are nowadays inclined to gauge how “progressive” a movement is by how multi-ethnic it is, it’s worth noting that the anti-globalization cause, long before it was taken up by Trump, had an oddly white cast to it. The protestors at the N30 gathering, as it was called, in Seattle back in 1999, were estimated to be well over 90 percent white. Should I thus assume, by today’s progressive standards, that leftist anti-trade activists are the most hateful, exclusionary, and oppressive cohort on Earth?

By contrast, some of today’s alt-lite activists don’t seem so parochial. In fact, Mike Cernovich sounds like he’s not so crazy about the U.S. after all in some recent tweets, seemingly preferring Japan and Singapore. That’s fine, but let’s go farther and admit, then, that international comparisons—and the kind of learning made more likely by lots of trans-national interaction—can help. Insularity is dangerous.

But then, I doubt the alt-lite types such as Cernovich are really interested in solving any of the world’s problems or outlining a detailed philosophy. They are mainly interested, like their so-called Proud Boys faction, in fighting. Tribalists at heart, they need fighting to define the edges of their in-group and out-groups. They’re perfectly suited for macho posturing on podcasts and grandstanding publicity stunts like the theater-interrupting stage-rushing of Laura Loomer but ill-suited to making serious predictions about the future of the world as a whole.

That’s not to say I endorse all institutions with pretensions to transcending national boundaries, especially if they’re governmental institutions. Surely, the disappearance of the Chinese government official who has been head of Interpol in recent years is enough to make one think twice about putting the policing of the world in the hands of a rep from an authoritarian nation. And we should cringe every time someone talks about permanent military entanglement with Afghanistan or Syria as a hallmark of “responsible” American thinking, as they constantly do.

Completely unregulated trade is certainly engagement, as are spontaneous cultural interactions determined by the ebb and flow of migration and billions of individuals’ choices about who to interact with from whichever nation. Let’s just allow those things to continue instead of the regulating and bombing. As usual, no government necessary, right or left.

And while the right-populists take up the dubious cause of keeping the world at bay, the fashionable leftists who two decades ago likely would’ve warned about the perils of globalization are now singing its praises in equally dopey ways, such as CNN’s Fareed Zakaria reporting that to get a handle on the nature and sources of European populism, he talked to Bono, the quintessential elite international celebrity and recent UN speaker. The elite are embarrassing, but as long as they chatter not about worshipping Brussels but about, say, hoping Ireland’s tax rates will be lower than the U.S.’s in the future, it sounds to me like they’re speaking a universal language all Americans can appreciate.

—Todd Seavey is the author of Libertarianism for Beginners and is on Twitter @ToddSeavey.