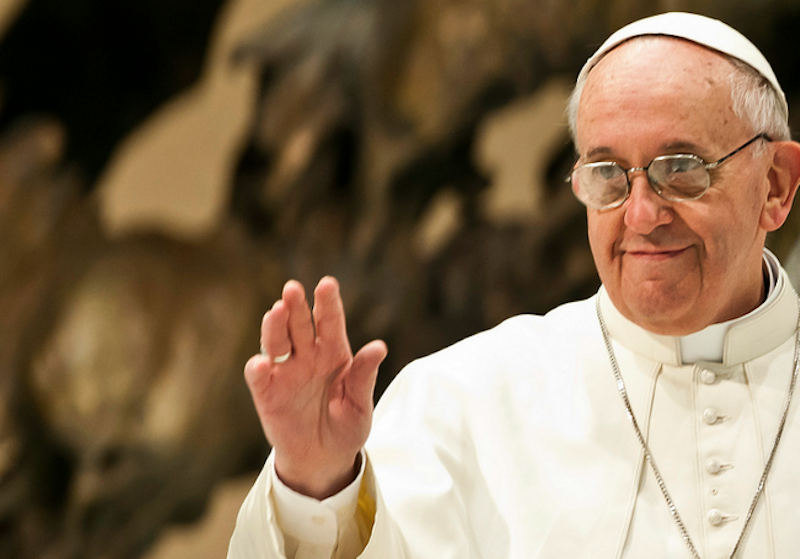 Religion and science are a toxic mix. Toss in politics and it becomes lethal. Mostly they should butt out of each other’s business. The brew becomes especially deadly when it involves the Catholic Church, which over the centuries has been accused, often rightly, of interfering with the internal policies of nations.

So when Pope Francis’ encyclical, Laudato si, (praise be) came off the Xerox machine, it was bound to cause a ruckus, as it did, especially because it accused the rich and famous of exploiting the misbegotten and the poor. Francis, arguably the first green pope, in effect, has conjoined religion and science to make the environment a moral, transcendent issue.

The papal missive was especially telling as it arrived only two days after Donald Trump’s declaration of his candidacy for president on a platform of greed is good. And it followed by a day a NASA report of its satellite mapping showing the earth’s aquifers—the underground water supplies—are rapidly depleting and in danger of drying up, potentially forcing entire populations to move because they lack water. California is withering in a drought, Texas is drowning in downpours and within decades much of the Atlantic Coast as we know it will be underwater because of rising ocean levels.

Most telling of all, however, the papal manifesto follows the latest Gallup poll which shows another sharp decline in Americans’ confidence in religion and religious institutions. But the Pew Research poll shows the pope with an 86 percent approval rating among Catholics and 64 percent among all Americans. Francis’ encyclical may not convert anyone but it certainly will buck up environmentalists and many other reasonable citizens of the world. He minced no words.

The pontiff’s 192-page encyclical, or letter (position paper in political parlance), the second of his pontificate, is a bombshell of a document that, for the first time, links climate change with issues of social justice. The encyclical said that a “structurally perverse” economic system where the rich exploit the poor is turning the earth into an “immense pile of filth.” In short, the pope says that we are gagging on our own toxins and a few people are getting rich from it.

The blowback was immediate and predictable, especially among conservatives and global free-traders and, most vocal of all, the fossil fuel industry. Jeb Bush, Republican candidate for president and a convert to Catholicism, said, among other remarks: “I don’t go to Mass for economic policy or for things in politics.”

There are no fewer than five Catholics in the GOP presidential mix and the Pope has clearly put them on the spot that historically had been a concern for Democrats who had to distance themselves from the Vatican, as John F. Kennedy famously did in 1960.

Martin O’Malley, Democratic presidential candidate and former governor of Maryland as well as a Catholic, has called for the elimination of fossil fuels and a complete shift to clean energy by 2050, if not sooner. O’Malley was an ally of environmentalists while governor. So it may remain a cosmic mystery, with Bush and O’Malley as examples, as to how the same pulpit and the same catechism can produce such competing beliefs.

Sen. James M. Inhofe (R-OK), the Elmer Gantry of the U.S. Senate, bluntly told Francis to butt out: “The pope ought to stay with his job, and we’ll stay with ours.” Inhofe, chairman of the Senate Committee on Environment and Public Works, is not only the Senate’s man in charge of the environment but also its chief climate change denier. He claims that the Bible refutes climate change (Genesis 13:14.17) and that he believes “God says global warming is a hoax.” Inhofe represents a state with an oil-based economy.

It’s safe to say that the Vatican has more knowledgeable advisers than Inhofe has on staff. The Vatican’s Pontifical Academy of Sciences, which participated in drafting the document, includes believers, agnostics and atheists, among them the celebrated non-believing Stephen Hawking.

Francis’ encyclical, which has circulated to 5,000 bishops and could reach two billion Catholics around the world, is a searing indictment of big business and climate doubters. “Both the cry of the earth and the cry of the poor” must now be heard, it said. “The earth, our home, is beginning to look more and more like a pile of filth.” In other words, we‘re custodians of the air we breathe, the water we drink and the land that nourishes us. And we’ve turned spaceship earth into the most toxic landfill in the galaxy.

The Pope’s message is especially applicable here in Maryland, where natural resources are mainstays of our lives and livelihoods. The Chesapeake Bay, characterized by H.L. Mencken as “the world’s largest protein factory,” is a major source of employment as well as recreation. Hundreds of millions of dollars are spent trying to resuscitate its vanishing aquatic life. The state has more miles of inland waterways than any other.

Baltimore was the first major city in the nation to dig up its streets, in 1906, and install separate storm water and sanitary sewer systems in an effort to abate pollution. And in the 1960s, strip mining, the forerunner to fracking, was outlawed in Western Maryland because toxic acids were leeching into waterways that were poisoning the Bay. In the 1980s, the Baltimore-Washington area was declared among the most polluted in the nation because of auto missions from the overabundance of traffic. Auto emissions testing facilities were built and vehicle testing is required every two years. The Baltimore area also had one of the nation’s highest death rates from cancer that was attributed to industrial pollution.

And on the table before the ministers of influence in Annapolis are proposals to replace cars with public transit—the Red Line in Baltimore and the Purple Line in the Maryland suburbs around Washington—that would reduce the amount of pollutants fouling the air. Federal money, $900 million for each system, disappears if a decision is not made by August.

So it’s not as if the Pope is onto something new. Ninety-seven percent of the world’s scientists have already affirmed what he’s saying. The point is that Francis, an admired and beloved pontiff for his simplicity and forthrightness and an activist pope, is kicking up a fuss and—as euphemistic American’s like to say—starting a conversation. He has aligned the moral force of his position with preserving the environment and salvaging humanity.

And to underline the irony, the Pope is scheduled to address Congress when he visits America in September where he can look Inhofe straight in the eye in a silent duel over God’s view of a man-made environmental Apocalypse.

In his document, Francis calls for a “bold cultural revolution.” “We are not God,” the Pope reminds us, and to stop acting as if we are “usurping the place of God, even to the point of claiming an unlimited right to trample his creation underfoot.”

The Catholic Church has, over the centuries, been in the thick of scientific debate, often on the wrong side. Galileo comes to mind, as does Darwin. In this instance, and on the remarkable occasion of Laudato si, Francis and the church are on the side of, shall we say, the angels. Francis does not submit to Wall Street. He answers to a higher authority.

It is significant to note that Francis chose for his name that of his patron, St. Francis of Assisi, a man who lived a simple life, who loved all things great and small, plant and animal. But Francis’ message is not one of benign pantheism. It is a call to action.

“Most global warming in recent decades is due to the great concentration of greenhouse gases (carbon dioxide, methane, nitrogen oxides and others) released mainly as a result of human activity,” the manifesto says, as reported. “Concentrated in the atmosphere, these gases do not allow the warmth of the sun’s rays reflected by the earth to be dispersed in space.” The urgency for action doesn’t get any more compelling than that.