Down With the Flag

If the Confederate flag is actually expunged, what are we losing? 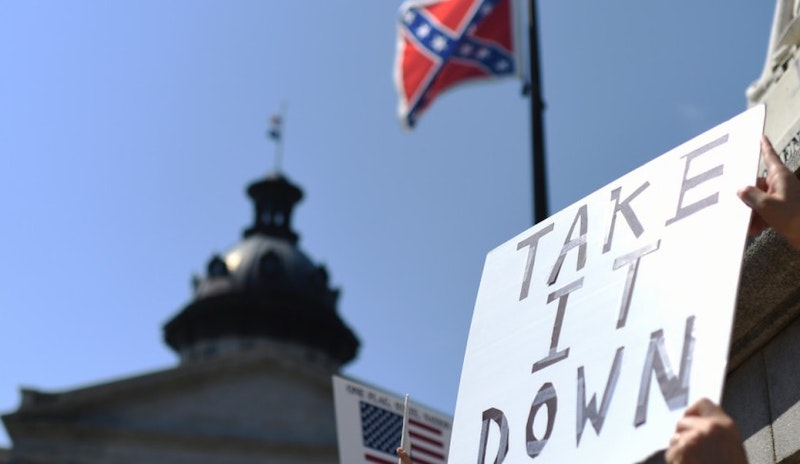 While I’ve had Jewish friends over the years, we’ve never taken time to compare notes on societal oppression, perhaps because it would’ve seemed too obvious—like conversations we’d picture our parents having. And though it’s impossible to say where these discussions might lead, symbols would likely figure in somehow. What are symbols? Symbols vary, but for our purposes today, let’s say that symbols are sounds and images: “kike” or “nigger,” a swastika or a Confederate flag. Symbols are powerful, discomfiting, and, depending on the symbol and the observer’s heritage, can remind the observer where he or she stands, in the scheme of thing. They’re stark reminders that no matter how comfortable or accepted one may feel most of the time, one remains an outsider or an aberration in the larger cultural scheme.

Look, I’m not a fan of Confederate flags; they put me on guard at a higher level than, say, a fading “McCain/Palin” bumper sticker on a Volvo or a copy of Totally Gross Jokes or a co-worker skimming “The Drudge Report” at his desk. The effect is nearly Pavlovian, a warning to “tread lightly” even if there doesn’t appear to be any immediate threat; the impulse is less to deface the symbol than to steer clear of it while accepting that it and what it often represents is undeniably there, and will likely always be there in some form.

Of course, mileage does vary. I’ve known two people who hung massive Confederate flags on their walls. One was a sawed-off jackass upstairs neighbor who lived immediately above me in the first apartment my ex-wife and I shared; you can bet I didn’t go up to confront the dude when his kids visited and made a racket to wake the dead. The other was my ex-father in law, a native West Virginian and Civil War buff who in some ways became like a second father to me. Otherwise, it’s been more remote: hard-eyed strangers whose license plates or bumpers celebrated this particular symbol.

Years ago, in a magazine interview, the Breeders’ Kim Deal made an interesting statement about sexism; to paraphrase, she said that she preferred the overt sexism of truckers and bikers to the more covert sexism of indie-rock hipsters, because at least with the first group she knew immediately what she was dealing with. Last year a YouTube video made the rounds where a conservative talk show host fielded calls about President Obama. A few cranks called in to expunge the president’s policies, then another caller cut straight to the heart of the matter: “We hate him because he’s a nigger.” The host, to his credit, quickly condemned and shut down the call—but the caller had made his point, and there was no mystery as to where he stood.

Not every person who flies the Confederate flag is a racist—for some it’s a heritage thing or a sort of anti-government iconography—yet my sense is that for the majority it is a racist symbol. What this means: you know where you stand with these people, at least. Bury the symbol, and overt racism retreats further underground, enough so that society can con itself (again) into believing that inequality and bias are fictions, symptoms of a dead past from social studies textbooks. Lose the Confederate flag, and we effectively lose a) a potent symbol that’s a reminder both of how far this country has come and how far it still has to go, and b) an aspect of its history. To be sure, if the flag vanishes, I won’t shed a single tear—but is that necessarily why it should vanish?