A Tragedy Among the Wingnuts

A man is dead because he wanted to embarrass a senator. 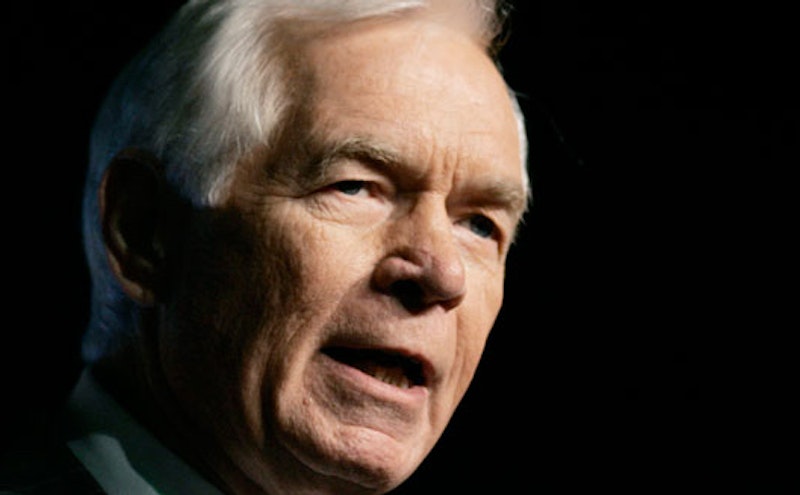 Some would-be political operatives tried a dirty trick against the wrong guy in the wrong place. The guy was Senator Thad Cochran and the place was Mississippi, the state the venerable Republican has represented for decades. The wannabes were tea party devotees fed up about the menace of federal power. They discovered that local power can be a bitch too, and now one of them is dead. He shot himself in his garage a few weeks before a grand jury was supposed to consider his case. “I can't go to jail,” he kept saying. His alleged crime was conspiracy to post video footage of an old lady in a nursing home. The story is told in the latest New York magazine, and it can only be described as laughably sad.

The old lady was Mrs. Cochran, and she had been committed to the nursing home many years ago because she suffered from dementia. Now the senator was battling hard for re-nomination against a tea party activist. Attack ads pelted the upstart, and the upstart didn't pelt back with attacks of his own. The wannabes figured they could do it for him by documenting the existence of Mrs. Cochran. Of course, people already knew that she existed. After all, the would-be operatives (they were a gym teacher, a lawyer, a blogger, and a fellow whose job we aren't told) discovered the woman by searching public information online. But she wasn't much talked about. Google “Thad Cochran, wife” and what showed up was a picture of somebody else, a person who proved to be Cochran's executive assistant. Senator and assistant traveled together, and she owned a home in a town where the senator had been reported strolling about with a female. Supposedly, the couple had asked a boy whether he could mow their lawn.

The senator was 76, and his assistant was 74, and most people might think there was little scandal in two aged people setting up together after one of them had lost a spouse to dementia. The article doesn't try to explain the conspirators' reasoning, so I'll offer this. To be a wingnut is to believe that the left is choking the country with polite lies (blacks are just as good as whites, the President was born in the U.S., women don't need to be blonde and buxom). These lies must be confronted with the small, hard truths that show them up. So the fellows sat at their keyboards and plumbed the Internet for out-of-the-way facts. These facts didn't add up to much, but they weren't quite the same as the official story. After all, the senator had never issued a press release saying that he would now keep company with his executive assistant, and various news stories referred to the old lady on the senator's arm as his wife. The wannabes had peeled off the decal, and they knew that beneath any decal there must lie an ugly truth.

Next step was to broadcast the small, hard fact that made the lie unmistakable. Not a statistic, not what a president said when signing a bill, but a fact that could be right there in the room with you. They would show the world the senator's very wife, the real Mrs. Cochran. There, see? That's not the woman you get when you Google “Thad Cochran, wife”! Wingnuts feel the power of such facts. They feel that power so intensely that other facts get dimmed out, which can lead to unfortunate surprises. In this case, context destroyed any hope that their target's alleged adultery would disturb anyone; therefore, their bombshell fizzled. Meanwhile, some other facts were sneaking up on the conspirators.

The conspirators had put a helpless old woman on display, and that's an ugly thing to do—a small, ugly thing. But local authorities did their best to treat it as a very large crime. They hit one man with $500,000 bail and another with $250,000 bail. The man who sidled into the nursing home and took the video was threatened with decades behind bars. The charge was burglary, though he said (and we aren't told he was wrong) that a security guard had let him in and that he was acting as a journalist. That man accepted two and a half years in jail rather than risk the longer sentence. The others received years of probation. Except for the man with the $250,000 bail: he was the one who killed himself. As described, he was a fragile type who hated confrontation.

What was behind this legal mauling? All we have is what the defendants' lawyers tell us, but it sounds plausible. “You just have to do the math,” says one. Cochran, the incumbent, was the GOP's man, and the GOP has been running Mississippi and its towns for quite some time. City judges “have to know what side their bread is buttered on,” the lawyer says. Another takes the same line “What the Cochran side did, you can call that a conspiracy and other people will say it’s politics as usual,” he says. “It’s wrong either way. Dead wrong.” Perhaps the key part of his quote is the phrase “politics as usual.” It was nothing new to have courts use bail as a punishment, or for prosecutors to threaten 50 years for a trivial charge, or for them to do this simply because the victims had made trouble for somebody who was connected.

The second lawyer, figuratively, sighs and gives a shrug. “A lot of this stuff that looks like conspiracy is just dumb redneck crap,” he says. The man who died had got involved in politics because of the tea party. He was afraid of Washington. But it looks like he died because of his hometown.