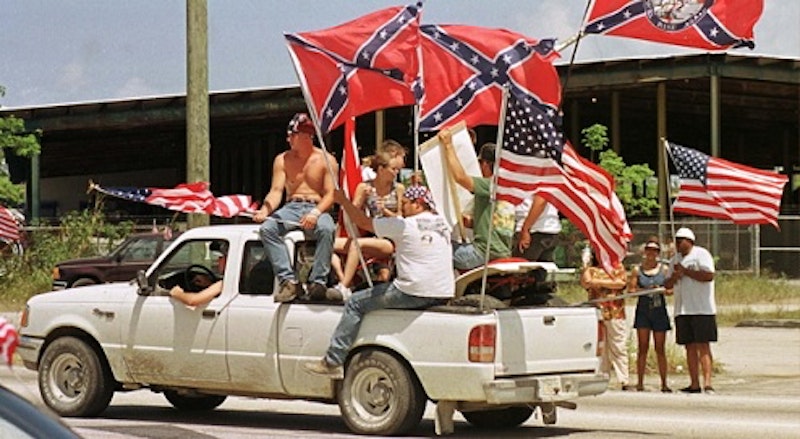 The angriest man at National Review is a fellow named Kevin D. Williamson. He has a shaved head and a tightly trimmed beard, and once he grabbed a lady's cell phone and gave it a heave because she was using the thing during a theater production. You can see that impulse control isn't his strong point. If he had any he might not be a writer, or at least not about politics. His method is to seethe and fume until the lid pops off, at which point a couple thousand words come bubbling out. Apparently readers at National Review like the results: he's a regular over there.

What's he mad about now? The fuss over the Confederate flag, or the battle flag of the army of northern Virginia, as it's properly known. A battle flag-waving racist lunatic killed nine innocent black Americans, and now most of the country wants the thing out of sight. This makes Williamson furious. In his latest column he asserts that “the Left” (his grandly capitalized name for America's dowdy collection of non-centrists and non-conservatives) brutally requires that “Southern identity as such must be anathematized.”

Of course, he also asserts, “I bear no brief for the peckerwood-trash cultural tendencies that led Fritz Hollings, then governor, and the rest of the loyal Democrats who ran segregation-era South Carolina to hoist the Confederate flag in 1962.” That's in the very same piece. Peckerwood trash! I'm no Southerner, but that sure sounds like—how does one say—some healthy anathematizing right there. In fact it sounds like hate speech. No, wait—it is hate speech. From the man who says those leftists (sorry, I mean Leftists) want to turn the South into a national pariah.

Republicans are in a bind. They've done well off racist voters for the past 50 years, but now the breed is dwindling. Meanwhile, the nation as a whole is even less enthusiastic about racism than it was back when Lee Atwater won elections while keeping “the segs” out of camera view. Now Dylann Roof and a few bullets have reminded the general public about the meaning behind Lynyrd Skynyrd's favorite stage prop. The Williamson response is to attack “the Left and its creature, the Democratic party” for being against the flag, and also to attack Democrats for being in favor of the flag—as they were back when racists voted Democrat and not Republican.

Williamson mentions many things: campaign finance reform, Firefly, Wendy Davis, Joan Baez singing “The Night They Drove Old Dixie Down,” Debbie Stabenow and how she would milk a meteor crisis if such a crisis ever happened. He even mentions that Jenner person. But the piece doesn't mention the Civil Rights Act or Voting Rights Act, and how they were engineered by a Democratic president and opposed by Ronald Reagan. It doesn't mention how Strom Thurmond, the Senate's marquee segregationist, left the Democrats for the Republicans just two and a half months after the Civil Rights Act was passed. It doesn't mention Richard Nixon and the Southern Strategy.

Come to think of it, the piece also leaves out WalMart and Amazon and the way they decided to dump Confederate-themed merchandise. No mention of the pressure by big business on South Carolina to take down the Stars and Bars if the state wanted its share of new factories. And no mention that the flag was created expressly to celebrate the idea and actuality of white men fighting to keep their foot on the black man's throat (if feminists will forgive this gendered language). Instead, Williamson tells a story about “the Left” and how it wants to push us around because it can't win enough elections. There's a “progressive panic attack,” he says, and the “unmistakable stink of desperation,” plus “hysterical shrieking,” and thus the radical haters of the established order turn their sights on the battle flag because it's beloved in the region where Republicans now hold power. The evidence for this argument is... well, I mentioned Jenner and Firefly.

Here's a simpler story. One morning Americans looked at their TVs and computer screens and saw that nine people had been killed by a man who hated blacks, and that the state where this massacre took place wouldn't even take down the flag that the man used to celebrate his racism. Nine citizens killed for being black, and the flag of the slaveholders flew from a pole that the victims' taxes had helped pay for. Across millions of American minds there struggled a thought that wasn't especially elaborate or noble, but one that was right on the money. It went something like this: That's really a bit much. That can't be right. And then: That's really wrong. Everyone knew that flag stood for racism, and that black Americans had to live with it anyway, and then Middle America found out what living with that thing entails. And millions of people said, No more. Soon enough the big retailers and employers were scrambling to keep up.

Or maybe it's all because of Debbie Stabenow and the meteor. Kevin Williamson has his story and I have mine. But I do know this: he's a hater and the crowd at National Review likes him just fine. Make of that what you will.