A National Review writer says the GOP is making inroads on the youth vote. 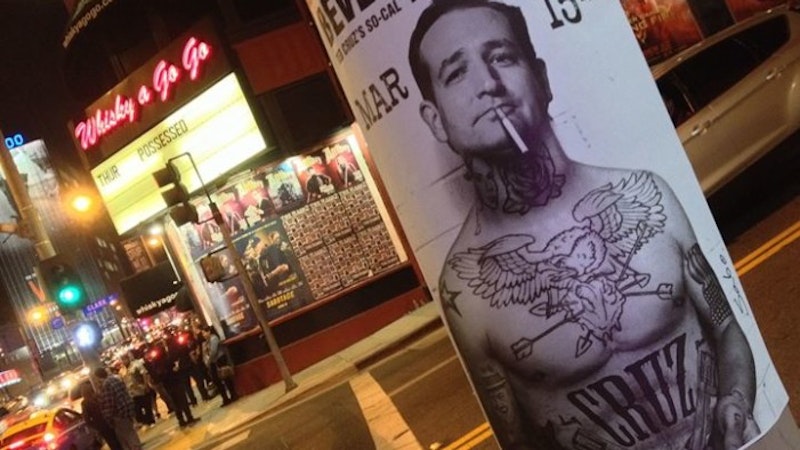 Ignore the appalling blanket coverage given to Donald Trump’s announcement of his presidential candidacy a couple of days ago—lazy political journalists are not discriminating, even when it comes to a public buffoon like Trump—and focus, if you can, on what must be the most ludicrous commentary on the 2016 campaign that I’ve read in at least two weeks. Thank you, Kristin Tate, for allowing me the pleasure of flashing a wide grin upon reading your National Review article that claims a Republican can win the White House if he’s cool. Tate has seen the A$AP Rocky/Silicon Valley light and it leads to the defeat of Grandma Hillary Clinton, a sexagenarian whom no one would argue, including her, is cool/hip. That taken care of, Tate lets readers know that John McCain was not cool, especially compared to Barack Obama, whose supporters—imagine this!—drank Starbucks, wore skinny jeans and blogged on Apple devices. Fine, so Tate herself isn’t so cool, but Obama was: a gifted orator, a charismatic campaigner, a combo of Muhammad Ali and Ryan Gosling who would’ve made a top-rated late night talk show host. (And would it surprise anyone if he eschewed academia for TV once leaving office?)

In my lifetime, I can think of just three presidential candidates who were cool as a mule: Obama, JFK and Jerry Brown. (People forget, but when Brown entered the ’76 Democratic primaries at 37, too late to fend off Jimmy Carter, he traveled with girlfriend Linda Ronstadt, the cast members of Nashville and other au courant celebrities; in ’92, he slept on couches while mocking Bill Clinton). That’s it. Except for these rare exceptions, politics and cool don’t mix: think back to high school and college and remember the student government busybodies. Almost none were cool, as they’d already planned out a diagram for adult political success, interning for members of Congress or governors, and then either went to law school or collected chits for a twentysomething City Council run.

Tate defies common sense by claiming that moral scold/Xenophobe Ted Cruz gets it, all because of a good-natured, self-deprecatory tweet about street artist Sabo’s derisive poster of him with tattoos and a cigarette dangling from his mouth. But cool? Sure, if you think young voters dig his myopic views on gay marriage and deporting immigrants. Marco Rubio, 44, gets points from Tate because he’s a 1990s hip-hop fan: never mind that’s the music of his time. And Rand Paul, the dorky putative Libertarian, is, in Tate’s eyes, cool because his campaign store sells dog tags and koozies. She doesn’t enumerate the cool characteristics of Scott Walker, Jeb Bush, John Kasich or Chris Christie, presumably because even she knows there are none.

She concludes this very, very dumb article: “Most Millennials are fed up with the status quo on Capitol Hill, and Clinton reeks of entitlement and entrenchment. Republicans can do a whole lot better with the youth vote if they can figure out how to become the party of cool. These days, that means much more than grabbing a saxophone and honking out a few notes of an Elvis song on MTV—and this year’s crop of Republicans seems to get that.”

Dope, Kristin! Double fist-bump! I’m no expert on today’s cool—that torch was passed to my own Millennial sons—but if a Republican candidate aims to make inroads on the youth vote, addressing obscene college tuition costs and the dearth of jobs would go a lot further than raving about the latest episode of Orange is the New Black.