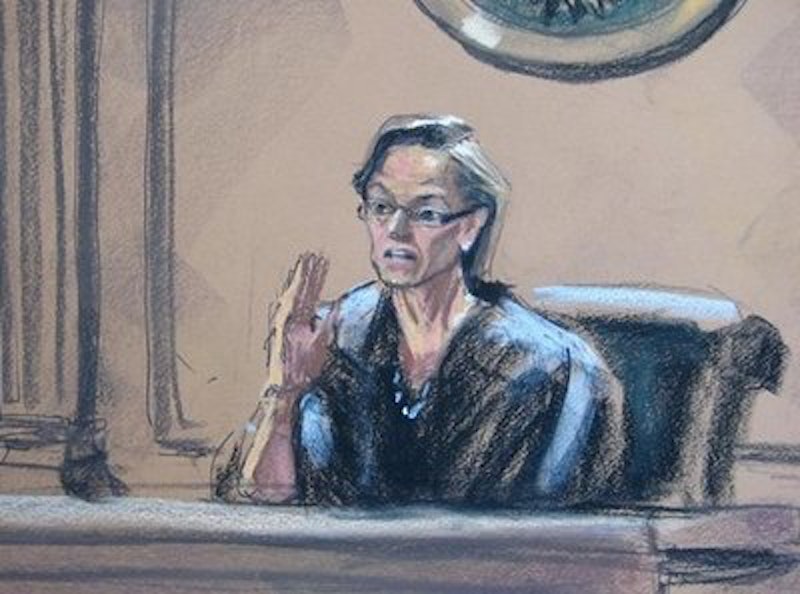 "I hope there is a special place in hell reserved for that woman."

These are the words of "Rhywun," written in the comments section of Reason, referring to a Federal judge named Katherine Forrest, who recently sentenced Silk Road's founder Ross Ulbricht to life in prison without parole for running an online drug operation, despite the fact that he wasn't accused of any crimes of violence.

Mild, right? Especially by online standards. One important rule of the Internet is that you never go to the comments section. That's because so many commenters are deranged and abusive (and this holds true in spades for Reason) that they often tend to drown out any voices of common sense. Anyone who peruses comments sections knows this well, and realizes that talking about a special place in hell for someone is a relatively polite comment by Internet standards, but the federal Department of Justice (DOJ) begs to differ. They’ve subpoenaed Reason to obtain information that will help them track down the true identity of Rhywun and—presumably—bring him to justice.

In fairness, there were several other, harsher, comments directed at the judge, such as:

"Its (sic) judges like these that should be taken out back and shot.”

“Why waste the ammunition? Wood chippers get the message across clearly. Especially if you feed them in feet first.”

Serious stuff, but don't fear: the Feds are on it. They’re seeking to identify the two authors of these dangerous calls to violence as well.  Could any objective person read the above comments and view them as viable threats? Referring to taking someone out back and shooting them is common hyperbole used to express a sense of outrage, and the wood chipper is probably a joking reference to the movie Fargo. Not one of the commenters came close to describing even a vague plan to enact their various "threats.” This is nothing more than the kids acting up a little.

Federal law prohibits making threats over state lines, and threatening a federal judge can be a felony, but the legal bar that the Supreme Court has established is that they must be considered "true" threats, not just bluster. When you make a true threat is when the First Amendment no longer protects your free speech. The courts have yet to establish a test for the true threat, but it's pretty obvious when it isn't one, unless you happen to be a U.S. Attorney.

Niketh Velamoor, the Assistant U.S. Attorney who issued the subpoena, thinks that the Reason comments are much more than just the ramblings of Internet trolls. He wants the FBI to check out Rhywun and the others, and perhaps he'll push it so they then have to hire attorneys. Reason will have to devote time to the case, and it will need to hire attorneys too. The tangible gain for the country will be negative, but U.S Attorneys are often not concerned with such details.

Velamoor works in U.S. Attorney's Office for the Southern District of New York, covering Manhattan and the Bronx. Rikers Island prison in the Bronx is currently operating as a gulag in many ways (you can be detained there for years without a trial) and in Manhattan you have Wall St. excesses to police, but Niketh is cracking down on harmless keyboard warriors. The irony is that the NY Southern District's attorneys are known as the biggest badasses in the business, willing to take on all the sacred cows. You really don't want too get that phone call from this office, but Velamoor isn't doing much for their reputation right now.

In his subpoena to Reason (which was subsequently leaked to blogger Ken White) Velamoor "requests" that order be kept a secret. I can only imagine that he wasn’t able to obtain a gag order and then decided on another route, because there aren’t many people who take such a request from the all-powerful DOJ at face value. The subtext was that there would be consequences if the request were denied. As for targeting the nation's most prominent libertarian publication—Reason—in his assault on the First Amendment, one can only speculate. Does Velamoor really not know what Reason is all about and what a hornet's nest he has just kicked over? And, by the way, Rand Paul is also going to have a field day with this one.

It doesn't take much reading to realize that the Constitution is getting watered down as the ultimate legal document of the United States. Judges, who work for the government, tend to interpret it in favor of their employers, though this was not the intent of the Founding Fathers. To name only the most current outrage, a man named Carlos Montero was arrested at 17, and now—seven years later—he’s still awaiting trial while detained at Rikers Island.

Now the DOJ wants to patrol the Internet and regulate how people choose to express themselves in emotional situations. The First Amendment didn't place this sort of restriction on free speech and Velamoor is well aware of this. He just doesn't care, because in his arrogance as a power-drunk U.S. Attorney he knows he can get away with it. Reason removed the "offensive" comments, and that should’ve been the end of it. If Velamoor keeps his misplaced zealotry up, I'm going to start wishing there was a special place in hell reserved for him. The question is, will he send a couple FBI agents to my front door if I put this in words on the Internet? It sure wouldn't be his first abuse of power.