The Political Fallout in Baltimore

Mosby and Cummings up; Rawlings-Blake and O’Malley down. 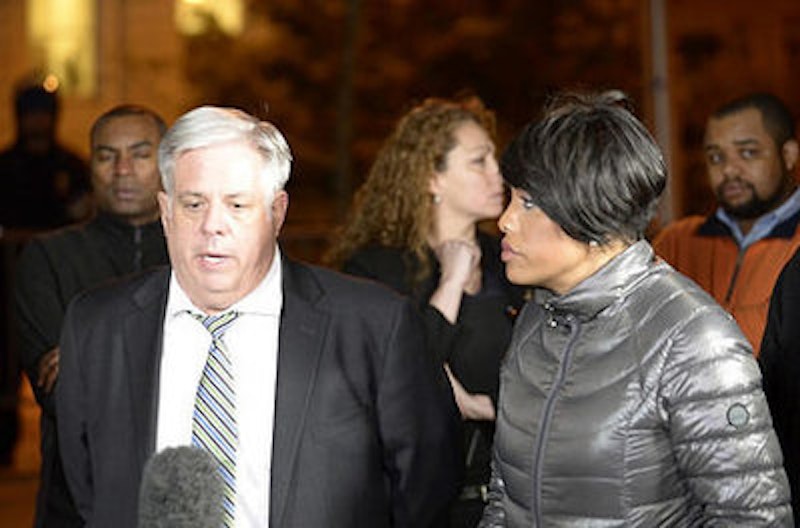 Baltimore Mayor Stephanie Rawlings-Blake allowed the disturbances to get out of control before asking for help which contributed to the Sandtown-Winchester mayhem. Gov. Larry Hogan (R) responded firmly and aggressively and displayed his affable nature by doing hoops with the guys in the ‘hood. State’s Attorney Marilyn Mosby rushed to judgment by charging six cops in the death of Freddie Gray without a thorough investigation. Former governor and mayor Martin O’Malley tramped through the rubble and was blamed for causing the uprising with his zero tolerance policing policies. President Barack Obama turned a cold shoulder on Baltimore by not visiting the city in person. And Rep. Elijah Cummings (D) was a calming influence with his bullhorn crowd control during the curfew.

These are the after-images arising out of the detritus of Sandtown-Winchester. And to hear the post-mortem chatter, those impressions are frozen forever and could affect political careers for years to come. But the mental snapshots will no doubt blur, though, as the rubble is cleared, CVS rebuilds and people resume their daily chores. The next big test will probably come when the jury closets to decide the fate of the six cops—if the case gets that far—who are charged in Gray’s death.

But right up front, get one thing straight. Though there may be questions about judgment and timing of the calls for help, Rawlings-Blake and Hogan were playing to two different constituencies—Rawlings-Blake to her majority black city and Hogan probably beyond the I-95 rainbow cluster to the 20 largely white counties that elected him. In the heat of the moment, they did what they thought was best, though to be fair, Rawlings-Blake at first appeared dazed and uncertain.

Rawlings-Blake no doubt was hoping that the destructive backlash to Gray’s death was fleeting and a few people were just blowing off steam. And there are those, too, who believe that Rawlings-Blake is really not in touch with her own town and the simmering despair in its deepest city-city warrens. Nonetheless, she eventually made the call to Annapolis and Hogan declared a state of emergency.

In any case, the riots rocked Rawlings-Blake out of her City Hall bunker and onto the streets to witness the unleashed forces of deprivation and injustice. She’s asked the Justice Department to review her police department for civil rights abuses and brute-force conduct. The Justice Department review is underway. Rawlings-Blake has now embraced the slogan, “One Baltimore,” but she’s yet to define what it means.

Give Hogan credit, too, for not strutting or preening as Spiro T. Agnew did in April, 1968, when he assembled black community leaders and berated them in public for failing to quell the riots following the shooting of the Rev. Martin Luther King Jr. Hogan calmly moved his government to Baltimore and settled there until the trouble was over, his National Guard and State Troopers withdrawn and the curfew was lifted. Hogan even walked through the trouble spots chatting up folks on the streets and at Lexington Market.

No question that the political standout during the troubled week was Mosby, only four months in office as state’s attorney. Like it or not, Mosby was poised and tough as she delineated the charges against the six police officers, three of them black, directly associated with the trail of incidents that culminated in Gray’s death. And she did it only hours after receiving the results of the police department’s internal investigation. And that’s the rap sheet on Mosby. She moved too fast.

But anyone who watches Law and Order understands that’s what prosecutors do. Cops investigate, prosecutors prosecute. Mosby’s quick action brought the calamitous week to an acceptable conclusion. There was rejoicing on the streets and a parade of celebration. Mosby became the first, and only, prosecutor to bring charges against cops in the recent chain of deaths of black men. Convictions are another matter and another story. Lawyers for the policemen have filed motions for dismissal and for Mosby’s recusal because of alleged conflicts of interest. But put Mosby down as a possible future candidate for mayor with a resume that really resonates.

Cummings, for his part, decamped from his lofty perch as ranking Democrat on the House Government Operations Committee to take to the streets at the heart of the district that has elected him 11 times to Congress and before that to the Maryland House of Delegates where he had been speaker pro tem.

Cummings patrolled the flashpoint corners of North and Pennsylvania Aves. night after night urging non-violence and, most of all, for his people to obey the ten p.m. curfew and return to their homes. And now Cummings is free to consider the most important decision of his political career—whether to join the Democratic battle to succeed the departing Sen. Barbara Mikulski (D) in the U.S. Senate. It would mean, of course, risking his seat in the House and giving up the district where he lives and roams the streets in good times and bad. But the polls are encouraging for Cummings to dive in.

Finally, O’Malley, Maryland’s tentative candidate for president, who has promised to decide this month whether or not to go all in. O’Malley had been in Ireland to make speeches (and presumably money) when Baltimore went up in flames. He returned to his hometown and promptly hit the streets where he once campaigned for mayor and governor and, in most cases, won as high as 90 percent of the black vote.

He was booed and accused of creating the hostile environment that led to Gray’s death. His law and order regime as mayor and his zero tolerance policing policies, he was told on the streets, caused many black men to be hassled by cops and jailed for minor or no offenses at all. Under O’Malley’s watch as mayor, crime went down but the prison population went up, way up.

But O’Malley is skilled at turning lemons into a sweet palatable drink. The following Sunday on Meet the Press he said: “What’s happened in Baltimore should be a wake up call for the entire country. We have deep problems as a country, and we need deeper understanding if we’re going to give our children a better future.”

O’Malley added that the very same theme would be central to his campaign for president which, he said, would launch in Baltimore if he decides to run.

Obama, the former community organizer who’ll never be a candidate again, perhaps summed it up best to David Letterman: “What you have are pockets of poverty, lack of opportunity, lack of education all across this country, and too often we ignore those pockets until something happens, and then we act surprised.”