The Red Line is in serious danger of derailing. 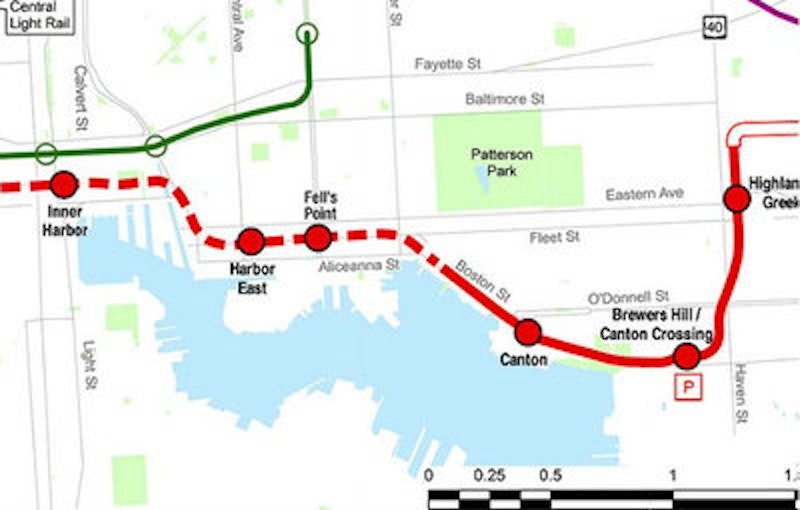 Baltimore’s Red Line, presented as an east-west, or west-east, lifeline to economic opportunity, is in serious danger of derailing because of Wall Street doubletalk, Congressional obstinacy, self-serving politics and a regional competition for shrinking mass transit dollars.

Mass transit is about moving people. Highways are about moving cars. Republican Gov. Larry Hogan has let it be known repeatedly that he favors asphalt over rails. He has made promises to the counties that elected him and he has hired a transportation secretary he characterized as the “best highway man in the country.”

Hogan’s approach to policy appears to be little more than checking the boxes that correspond to campaign promises. Hogan’s decision to lower tolls at Maryland facilities by $58 million was intended to fulfill one of those promises. But one bond-rating house viewed the toll decrease as interfering in the decisions of an independent agency and awarded Maryland a “credit negative” on its report card.

Decoded from its arcane Wall Street insider babble, the ambiguous phrase means that the Maryland Transportation Authority will keep its Aa3 stable rating, according to reports. In other words, a slap on the wrist for being naughty and usurping the power of the agency that determines transportation fund needs and recommends tolls accordingly. But surely not grievous enough for Moody’s to reject the fees it collects for awarding the bond ratings.

What it really means, however, is that Maryland’s bonding capacity has been seriously diminished at a time when it needs money for two proposed rail lines and maintenance and repair of the state’s roads and bridges. And the proffered Red Line is already $1 billion shy of the $3 billion needed to build it. The reduction in tolls was opposed by General Assembly leaders and key budget committee members.

In the short term, Hogan satisfied his rackety constituency of toll-payers; in the long view, he may have compromised Maryland’s future transportation needs. The toll cuts are akin to Hogan taking a Rorschach test and accusing the doctor of showing him dirty pictures.

The back-of-the-envelope formula is simply this: Every one dollar in cash will buy approximately $10 in bond money. In other words, by reducing tolls by $58 million a year, Hogan has cut Maryland’s ability to sell transportation bonds by $580 million annually—or nearly $9 billion over 15 years, the usual life span of bonds. If the state falls short in its revenue-raising to pay off bonds, the bondholders have the right to sue the state.

It is important to note that Maryland is the only state in the nation with a unified transportation fund. Established in the early 1970s, the fund is a money pool that is supported by gas taxes, tolls, fares and fees. Out of that fund comes the money to operate and maintain Maryland’s roads and highways, the MARC trains, BWI-Thurgood Marshall Airport, the Baltimore Metro and bus systems, the Port of Baltimore, the state’s contribution to the Washington Metro System and the states bridges, tunnels, highways and toll roads.

In addition to cutting revenues collected by the fund, Maryland, under the last Republican governor, Robert L. Ehrlich Jr., issued so-called GARVEE bonds which enabled the state to borrow against future federal highway funds. So in addition to short-changing the state on future money, the transportation fund is being used to pay off debt on money that it doesn’t have.

Further depleting the revenue pool is the Intercounty Connecter, where tolls have remained far below projections because of under use of the relatively new highway. It was designed and built to cut commuter time and to facilitate access between neighboring Prince George’s and Montgomery Counties. The connecter has not lived up to its decades of planning and expectations. Tolls on the connecter were among those that were reduced by Gov. Hogan.

To compound the problem, the federal government has promised $900 million for each of Maryland’s two proposed mass transit systems— the Red Line in Baltimore and the Purple Line that would loop through Montgomery and Prince George’s Counties. The authority to award the money expires on May 31 unless Congress acts quickly to extend the deadline. The omnibus transportation bill is hung up in the Republican controlled Congress in a squabble over reducing funding.

Three companies have until August to submit their RFPs for the rail projects. Hogan and his new transportation secretary, Pete Rahn, are reviewing both the proposed systems to determine whether they are financially feasible. For the Red line, the Feds have promised $900 million, the State has promised $1 billion, Baltimore County has pledged $50 million, even though Executive Kevin Kamenetz is opposed to participating, and Baltimore City has promised $200 million. The numbers do not compute. The original price of $2 billion has already soared to $3 billion and cost overruns have not been factored in.

The Red Line, a 14-mile light rail system that would burrow through the city, would connect Woodlawn, on the West side of town, with Bayview on the East side. It would pass through downtown via a tunnel and run along Boston St. The proposed line is as much a social issue as it is a transportation matter as was the existing Metro system when it was advanced in 1971.

There are serious social and geographical rivalries involved in transportation issues. None are more fierce than the urban vs. rural grab for a share of the transportation money pot or the racial divides between the majority black city and surrounding counties and even within competing sides of the city.

There are those on the East side, where million dollar condos co-exist with resuscitated row houses, who resist the push from the West side. When the original Metro system was introduced, there was resistance to linking Baltimore and Anne Arundel Counties to the system.

And the outlying counties, which rely on Maryland’s road and highway network, resent paying gas taxes and tolls to support mass transportation systems that benefit only urban areas. That, in part, explains the adoption of the fare box formula, by which transit revenues help determine fares.

At a recent rally in support of the Red Line, Mayor Stephanie Rawlings-Blake was reported to have said, “Among the many lessons we learned [from the riots following the death of Freddie Gray] is that Baltimore needs more ways to connect our citizens with more jobs and more opportunities, and the Red line does exactly that… The message is loud and clear. To our friends in high places in the state who heard very loud and very clear from people in Baltimore that we need jobs. The Red Line means jobs.”

In Montgomery County, officials have made similar pitches about the 16-mile Purple Line’s economic benefits of creating businesses and jobs along its meandering route. They are competing in a regional rivalry with Baltimore for a finite number of dollars set aside for mass transit. Hogan’s toll cuts didn’t help.

Hogan told The Washington Post that the cost of the Purple Line, at his estimate of $153 million a mile, is “not acceptable.” Washington suburban officials are meeting with Hogan this week for a final push for approval of the Purple Line. Hogan has said he will decide within two weeks. He did not indicate whether his decision includes Baltimore’s teetering Red Line.