The fascinating stupidity of meme generation. 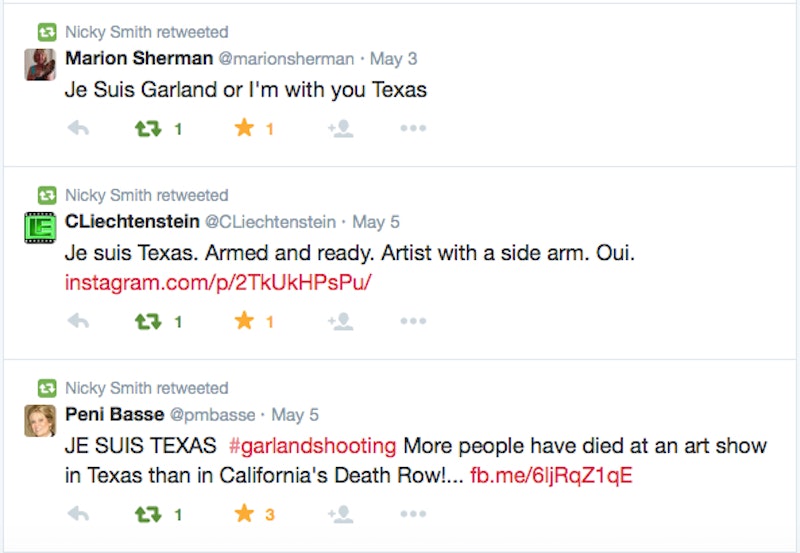 The attempted attack on an art fair in Garland, Texas last week spun one of the most deliriously stupid memes of the 21st century: “Je Suis Texas.” The outdoor art fair was actually a big contest to see who could draw the most offensive portrait of Mohammad. Texas. The slaughter of most of Charlie Hebdo’s staff in January made conservatives and libertarians absolutely giddy—for once they forgot that French anything is anathema. “Freedom Fries”? Fuck you! But fear of Muslims and freedom of speech and journalists being killed made #JeSuis[x] the most overused shorthand since -gate. I was up really early the morning of the attack and saw it play out live on TV, having no idea what Charlie Hebdo was or what kind of publication it was. The image of Theo Van Gogh with a machete sticking out of his chest is burned in my mind forever, and I remember in 2006 when Mohammad cartoons in Denmark had people killed.

Scrolling through Twitter two days ago, I noticed the hashtag #GarlandShooting and various denouncements about the narrative and discourse of our weekly spree shooting that I’d completely missed. Working backwards, I found a PTA mom tweet simply “#JeSuisTexas.” WHOOOOOOOOP! Doesn’t “French” mean “faggot” in Texas? I guess not this week. But of course there were the correctives reminding everyone that we speak English in America and imploring people to say instead “We Are Texas.” The laughter comes in waves. At times it’s hard to contain. Often, it just can’t get out, and I’m left with this knot in my stomach, a belly laugh too big to deliver. Conservatives love being told what to do and what to say, contrary to their “DON’T TREAD ON ME” bravado. But as it was noted frequently last week, the NRA and government fearing Second Amendment nuts are conspicuously silent when it comes to police brutality and murder.

No one deserves to be blown away because of a cartoon—as blasphemous as cartoon depictions of Mohammad are to many Muslims, a drawing will never warrant death in the real world. The whole idea of a public contest to draw the most insulting and offensive portrait of the prophet is stupid, and a really disturbing scene to imagine: kids eating cotton candy on the shoulders of their parents, soaking in all this ignorant hate and talk of Muslim boogeymen that will screw them up, and soon. And the tut-tutting toward Charlie Hebdo in the wake of the massacre of most of their staff was just appalling. “They were asking for it.” “They deserved it.” “They should’ve known what was coming.” How do you even respond to something like that? Think pieces about how “problematic” Charlie Hebdo is? Give me a break. That day was no different than Christians bombing abortion clinics. I wonder how the press and the public would react if the Westboro Baptist Church were bombed. Loot stores, burn buildings, break windows, link arms in the middle of the busiest street. Killing innocent people and ruining the lives of everyone connected to the victims and the survivors. It’s a tentacle from Hell. A magazine is not responsible for Islamophobia or anti-Semitism in France. Apologists for assassins are agitators.

Taking a child out for a sunny afternoon of hot dogs and virulent racism is a violent act. It’s easy to get sucked into the vortex of opinion and the hottest takes after the initial rush of a the act, and “Je Suis Texas” sums it up better than any think piece ever will.