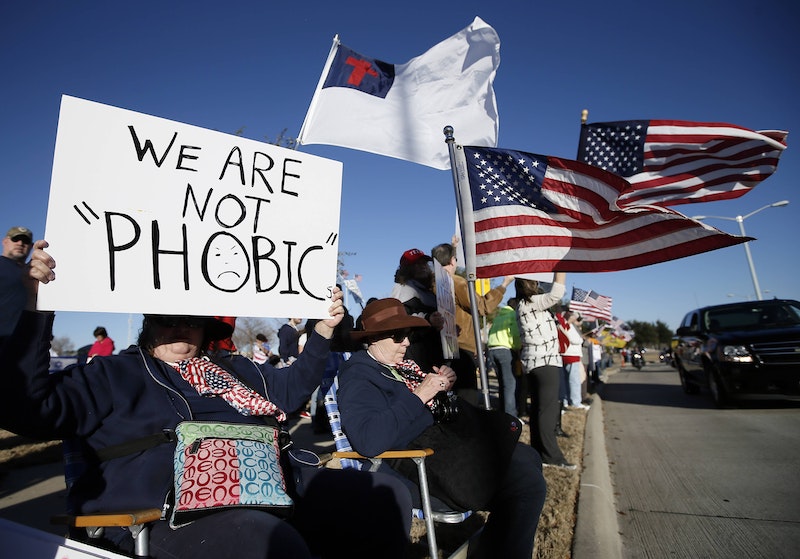 An extremist who hates the Muslim religion, Pamela Geller, held a contest in Garland, Texas on Sunday to see who could draw the best caricature of Muhammad, the founder of Islam. Two Islamist extremists—not of the trained variety—showed up with automatic weapons to enforce their religion's ban on depicting The Prophet, but were gunned down by a cop armed only with a handgun. That's one Texas sharpshooter.

It's hard to find anything positive about Geller, and I haven't bothered to research her because who she is has no real relevance to the Constitutional issues involved in Garland. What her sponsorship of this event has done, though, is to illustrate the dirty secret of the American left, which is that they hold the concept of free expression in appallingly low regard.

The left pays lip service to wanting a just and free society, but what they really mean is as long as it’s done their way. You might think that their main concern after it is proven once again that you can't draw the wrong Islam-themed picture without putting your life in danger is that this is an unacceptable situation in this country. I haven’t heard one person on the left address this point. What I did witness was a torrent of abuse directed at Geller who, while she organized the drawing contest, is merely a distraction from what actually matters.

Bad people get to do bad things in this country, right out in public, in exercising their right of free expression. The courts have upheld the rights of Nazis to march in Skokie, Illinois, and Westboro Baptist is free to spew its hatred at military funerals. Neither of these groups are darlings of the left—and they’d stop them if not for the Constitution—so you might think that by the time that Garland happens they might have an understanding of how this works. You’d be wrong though, as the debate from the left is all about Geller, who’s been set up as a strawman.

The standard-issue liberal, in the absence of an easy target like Geller, would have to confront the actual issue, which is censorship enforced with violence. The other little secret this group has is that it’s forbidden to criticize Islam. Mocking religious outliers such as Tim Tebow or Duck Dynasty's Phil Robertson is de rigueur on the left, as they are Christians, but the same doesn’t hold for Islam. Any criticism of Islam, in fact, will most likely get you branded as a bigot or racist, as Bill Maher can tell you.

As it’s a knee-jerk response from the left to condemn any criticism of Islam—which the Garland event implicitly did—they would be hard-pressed to know how to respond if, instead of Geller, a Muslim reformist had organized the event as a form of protest. Based on past events, I’m pretty sure they’d try to discredit such a person, just as they have done with Ayaan Hirsi Ali, an ex-Muslim who speaks out about the repression she suffered under the religion. Though she requires bodyguards to protect her from constant death threats, she’s dishonestly attacked by the left. The intent is to discredit and, ultimately, to censor her.

If anyone is expecting the American left to defend the free speech of someone they disagree with, they’re in for a long wait. The left is infected with the virus of political correctness, which means that consensus is favored over free thought. Bill Maher, who has always been a good liberal, goes against the grain on Islam and he's vilified. Hollywood liberal Ben Affleck goes on his TV show Real Time and fatuously calls him a "racist." Labeling him in this way is part of what liberals do well—censor people—even if they were once your comrade in arms.

The scariest thing I heard from a good liberal this week is that she sees little difference between those "inciting violence" and those doing it. Keep in mind that this is in reference to Garland, with the people threatening the violence being radical extremists and would-be murderers, while the ones "inciting" violence are sitting in a room drawing pictures. This kind of thinking is downright delusional, though it is not uncommon on the left. "Black Lives Matter" marches are regularly threatened with violence, but this person would explode in rage if that were used as a pretext to stop them. She wants Geller stopped though.

Stopping Geller will not be so easy, and this is going to get interesting because she is saying she will take her art contests to other cities. Many liberals will call for a ban on her events, though they won’t be able to make a legal case for it. The KKK gets parade permits, after all. As for her "inciting violence," unless she calls for a mosque to be burned down, or something equivalent, that's not going to stick either. Blaming someone for "inciting the violence" of fanatics who are willing to kill you for saying the wrong thing or drawing the wrong cartoon is an absurd concept, as it legitimizes the motives of murderers. I’m not a Muslim and don't plan on obeying any Muslim proscriptions on my behavior. I would hope no one else would either.