A Look at the Diverse Republican Field 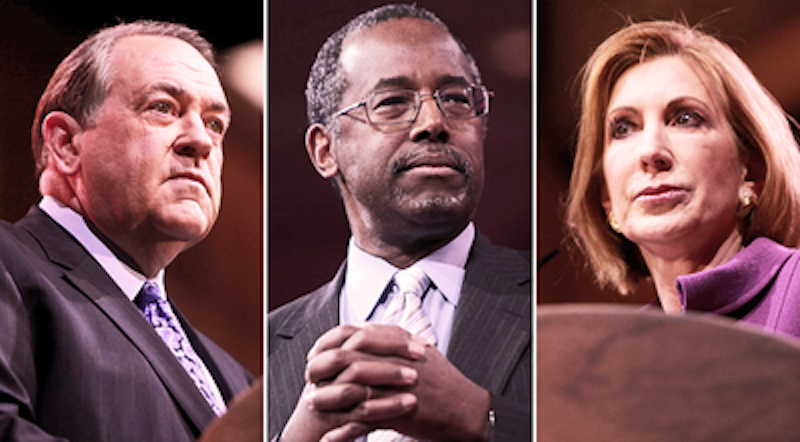 My right knee blew out, so I spent a few days watching clips of minor Republican candidates. They are vibrant, engaged people who offer a bold new direction for the country. The pain that ate at my kneecap and calf for six days was certainly not exacerbated by the sight of these characters, and it’s not at all the case that the second tier of the Republican presidential contest is occupied by a freak show of highly motivated oddities who function despite glaring lacks in their psycho-emotional infrastructure. Put another way, here's what I think of three remarkable but trivial people who say they ought to be president.

Carly Fiorina.  She came across well in her Katie Couric interview on Yahoo. I don't claim that she made sense, but close enough. Her manner was good, she was firm and brisk but also humorous, she spoke with an edge but didn't get angry. Take a look at the words and she's bullshitting, but I expect that, especially from Republicans. You just have to buy that marijuana is scary and coal is great, that climate change is nothing big and ISIS is a monster threat, and that Couric is a sexist because she thinks a non-politician who's polling near zero may be running for exposure, not for president. “Oh, Katie. Would you ask a male candidate that question?” Fiorina said, metaphorical eyebrow raised indulgently. Her tone was an invitation for male newscasters to boyishly own up. Maybe some fall for it, but Couric, a non-male, appeared happy to push back.

What's so good about Fiorina? Well, she was much worse the first time I saw her. That was on some cable news hour a few years back. Subject: Obama's problems in Congress. Perhaps she was tired then, because her voice banged against the head. It wasn't modulated and she argued by catchphrase. Her theme was that Congress didn't obey Obama, therefore Obama didn't measure up leader-wise. She told us more than a few times that a true president would “work his will with Congress,” a phrase she gave the rink-a-dink pomp that people bring to “President of the United States.” But with a shovel-against-the-head effect because of her voice. I thought she was an idiot. This time she came off much smoother.

Ben Carson. A bit of a relief. He’s the only conservative firebrand who is notably quiet. Not just quiet sometimes, but as a thing. He paces, he ruminates. I watched his announcement, and he seemed gentle and preoccupied. Apparently he was still coming to terms with people's ignorance. For instance, people who think the unemployment rate matters. “Our freedom and way of life is dependent upon a well-informed and educated populace,” he said ruefully, by way of preamble, and then launched in. “What you have to know is that you can make the unemployment rate anything you want it to be based on what numbers you include and what numbers you exclude.” What matters is the labor participation rate, he said, and that “has been steadily going down since 2009 and is now at a 37-year low.”

Well, okay. Economists and reporters do make a fuss about the unemployment rate, but maybe they're not clued in. Maybe unemployment is the only rate that can be jiggered with and you can't leave out numbers when deciding other rates. But labor participation didn't start falling in 2009, when Obama became president. The slide began in 2008, because of Lehman and the crisis. The difference between today's rate and the pre-Obama rate comes to three points out of a hundred. That's worth taking seriously, but is it proof that there's no recovery? Note that Carson, when asked his favorite secretary of the Treasury, said, “Andrea Mitchell's husband.” When told that the husband, Alan Greenspan, was actually ex-chairman of the Fed, Carson said, “Secretaries of the treasury, for the most part, are not big policy people.” The quotes are from Jason Zengerle's profile of Carson in the April GQ. The article also shows him talking with an Israeli about politics: “In the United States, we have Republicans, Democrats, and independents. What do you have?” and “And what is the role of the Knesset?” and “It sounds complex. Why don't they just adopt the system we have?”

Carson is just one of those people who go from being babies in the slum to world-class brain surgeons. He’s not the like the rest of us, and his character has folds that we don't comprehend. He can figure out how to separate the brains of two people born conjoined at the head. But his base of public policy knowledge is minuscule. You have to be a really good surgeon to know that little and still think you're an authority on stuff. You have to be a phenomenal surgeon to think that the world is having such awful problems because everybody else is so ignorant. Well, this man is phenomenal.

Mike Huckabee. Everyone treats his act as reheated sloppy seconds. I guess they're right. He was thin the first time, and that was a success story; he’d lost 110 pounds around age 50, which is amazing. Now he's a hulk all over again: he was levered behind the podium and looming over it like he was tackling the thing. That's a failure story. Meanwhile, his reedy tenor sailed above the hall. Yes, he can still talk, but the gift has been cheapened by exposure. Among other things, having a show on Fox means being on basic cable, becoming a yapper who separates catheter ads. One is broadcast from a set mounted near the receptionist's desk at the orthodontist's. One eventually announces for president, and no one remembers what one says. That is the Huck's predicament.

Once upon a time, the button-eyed man was something fresh and welcome. It didn't last long. December 2007, January 2008. For a curious liberal rubbernecking the GOP debates, he was the creature on the right who opened his mouth and sang something like reason. “I’m the conservative who is not mad at anybody,” he said and, about illegal immigrants, “After all, these are children of God.” I even liked "Jesus was too smart to ever run for public office." We could share a joke, at least. There, on the other side of the mirror, was proof that humans could be found anywhere, even a Republican presidential debate. The Huck was a hustling born-again politico from the Southern boondocks, but he'd been steered by the Bible and political reality (he ran a state for almost 10 years) toward something like my idea of humane common sense.

So I thought. Obviously, he was a pitchman, a fast talker supreme, but any devoted TV viewer can admire a pitchman who knows his craft. The catch is that this fellow is nothing but a pitchman. He doesn't care what comes out of his mouth as long as some money or power crawls into his pocket. Before the primaries were over, Huck had tacked against the illegals. By Obama's second term, he was saying the Palestinians who wanted their own country ought to get out of Palestine. Lately we've had this exchange with CNN’s Jake Tapper. Tapper: “Sir, you rented out your email list to a group selling hidden cures for cancer embedded in Bible verses, for the low price of $72. Don’t you lose credibility by attaching your name to things like that?” Huckabee: “Well, I never signed that letter.”

Now he's running for president and I don't care what he says. Yet this man won Iowa the same night that Obama did. It felt like history. Well, half of it was. The other half was the Republicans larking around. That’s what they do best, and Fiorina, Carson and Huckabee show us how.