The Paul Ryan Crowd Is Confused

Conventional wisdom on the economy is mostly wrong. 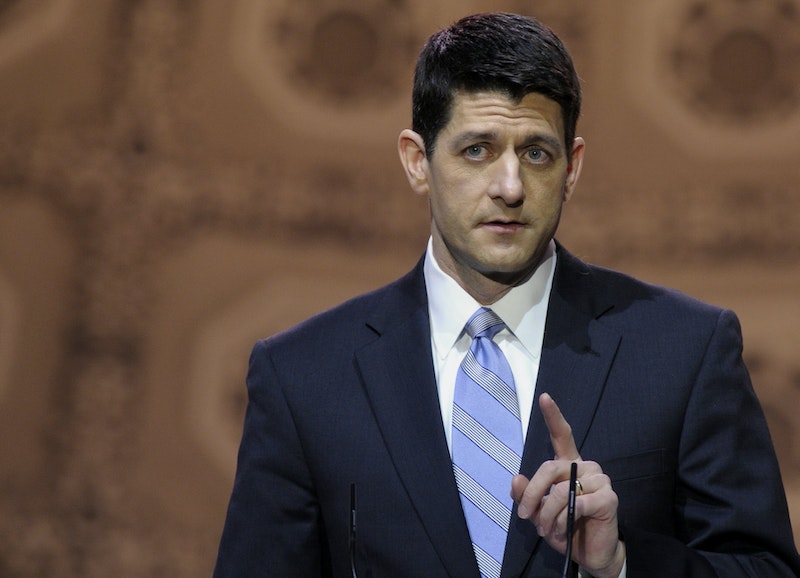 It’s painful to watch politicians or television commentators discussing economics. It’s as if they’re stuck in a time warp, back when the U.S. was still on the gold exchange standard. As Paul Ryan likes to put it, balancing the government budget, like you would your household budget is "good economics," regardless of the ensuing unemployment rate or other negative impacts on U.S. citizens.

The U.S. abandoned the gold exchange standard in 1971. With a non-convertible currency now—the dollar—all debt is issued and paid in that currency. If you take a $100 bill to the Federal Reserve, they'll give you five 20s, but no gold. Ryan types are concerned about government insolvency, even though there's no way for a nation with a non-convertible currency to become insolvent. U.S. government checks never bounce. Period.

Fear-mongering politicians on the right say we're about to become the next Greece, but Greece is not analogous to the U.S. As a Eurozone member, it cannot create euros as the U.S. can create dollars. Lacking a sovereign currency, it was forced into a brutal bailout deal. Americans can only be tricked—not forced—into austerity by clueless or deceitful politicians who naively believe the economy operates like a household.

The U.S. currently has about a 1:1 debt/GDP ratio, which deficit hawks like Ryan are convinced is a portent of inflation and, in a worst-case scenario, hyperinflation. I wonder how they explain Japan's current debt/GDP ratio, which has climbed from 1.62:1 in 2007 to an "alarming" 2.29:1 in 2015? They claim deficits and mounting national debt inevitably lead to inflation, and that the U.S is at the tipping point now, yet Japan has barely been able to keep itself out deflation for years.

The truth is, although it is possible, it's not easy for a nation with a strong economic base to spend its way into inflation. Japan's bond markets are calm, and interest rates on long-term government bonds are lower than ever. In other words, the market is not concerned, although by Ryan rules, Japan should be insolvent by now, with its people pushing wheelbarrows of 10,000 yen notes to the local convenience store.

Deficit hawks, and much of the media and general public, are convinced that the government funds its spending with tax revenues, unaware that it must first inject dollars into the economy via spending in order to then recoup some of them in taxes. Imagine a new nation has decided to issue a currency. How could it tax the people to fund spending without first spending the money so it's out there to tax? Dollars, before some of them return as tax revenue, are first injected into the economy by the Treasury, which instructs commercial banks to credit individual and business bank accounts. Once in the economy, they can then be taxed. The Treasury is not using tax-collected dollars to add zeros on a computer screen.

Paul Ryan should try paying his taxes in cash and deliver it in an envelope to the Federal Reserve. He thinks the government would then use this cash for Medicare and paying interest on the debt, so he'd be shocked to learn, after he left, they'd put his money in a shredder, just like they tear up your expensive Super Bowl ticket at the stadium because they have no more use for it. The ticket, like a $20 bill, has no intrinsic value to its issuer.

A better option to DEFCON 1 alert mode over the debt, and obsessing about a balanced budget, would be to make the political decision of what size to make the government, and then think of taxation not as a revenue collector, but as a way of stimulating or dampening the economy as it becomes necessary. Tax more when it overheats, less when it stalls.

Deficits shouldn’t be feared, as the government's deficit is the economy's surplus. Government surpluses, despite what you'll hear, are not a positive. They didn't keep Japan, which routinely ran government surpluses up until 1992—while steadily lecturing the U.S. on its deficits—out of its two "lost decades." Here at home, we've had a long history of recessions and depressions following on the heels of government surpluses.

The size of the debt is only relevant to the extent it's causing inflation, and U.S. long-term bonds, like Japan's, are not indicating any fear of inflation in the market. People are easily fooled by the rhetoric of politicians, but the market ignores them. The U.S. government spending is constrained by inflation now, but we have plenty of excess capacity, so inflation is not a danger. We're not in any way Weimar Germany or Zimbabwe or Bolivia, whose economies all suffered from structural issues when they went into hyperinflation.

The Democrats shouldn’t be cowed by the deficit hawks into making Social Security and Medicare cuts, and not worrying about unemployment, "because of the deficit." There’s no longer a need to pay lip service to the ideas of the clueless Ryan. The U.S. has the potential to prosper way beyond what people imagine if we can just ignore ideological claptrap from politicians.