Bernie-moaning and “I Voted” sticker denial. 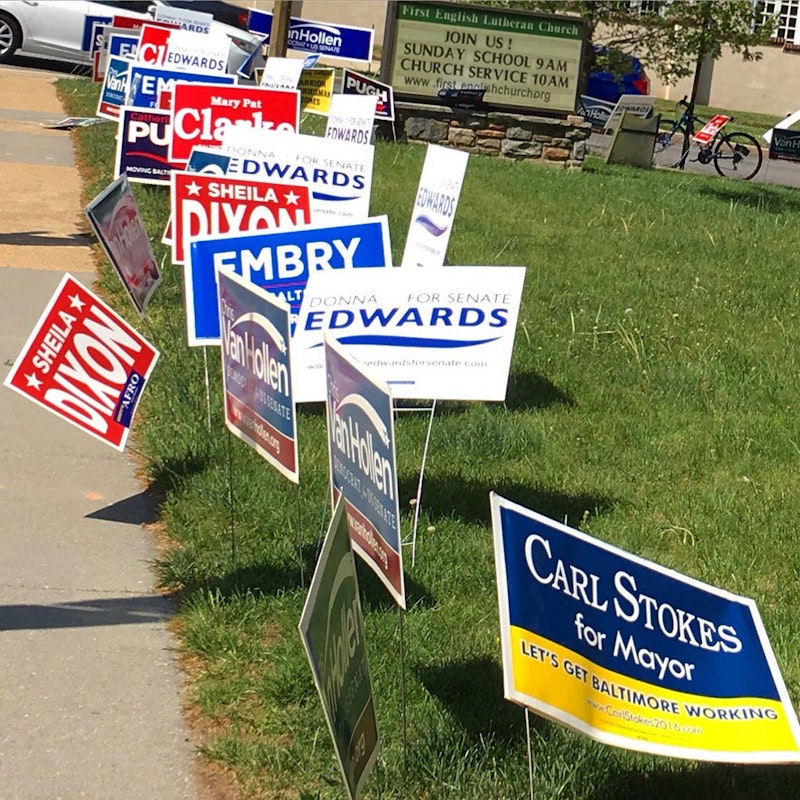 When I woke up yesterday, it was overcast and windy in Baltimore—a glorious day. Before I got in the shower, I checked Facebook and scrolled through the many “I Voted!” posts: people reminding others to vote, photos of polling places, clusters of lawn signs—and then there was the “I Voted!” sticker, which was in short supply and sorely missed by everyone that went to the polls before noon in Baltimore City. I saw dozens upon dozens of posts by disappointed people who voted but walked away without a sticker; some wondered, however facetiously, if their vote counted if they didn’t get a sticker. It’s like people reverted several stages and came away from a boring and painful doctor’s appointment without a lollipop. The Sun even sent out an alert at mid-day that stickers were being emergency delivered across the city!

By the time I voted in the late afternoon, there were plenty of stickers, thick rolls prominently displayed on the table next to the check-in desk. There was no line, voting took five minutes, and on my way out, I asked the volunteers about the sticker fiasco. As soon as I said the word “sticker,” their eyes lit up and they all pointed to the rolls on the table in front of me. People care about getting their stickers! I walked through Elizabeth Embry’s home turf, sticker on my front shirt pocket, passing more and more polling places along the way, already clogged, and by the time I got home, people were already bemoaning people complaining about people complaining about not getting stickers. Speed kills!

I don’t know anyone who voted for Hillary Clinton, but I knew Bernie Sanders had no chance here. She was consistently polling 30 points ahead of him, and so much of Maryland is inside the Beltway. How could so many of my friends and acquaintances be so shocked that Clinton’s win was called the minute that polls closed, with 0 percent of precincts reporting? Many cried foul, claiming Time Warner and CNN had the fix in—and while that may be true, these races are called at poll-close with 0 percent all the time by most news organizations. Just before 11:30 p.m., 88 percent of Maryland’s precincts had reported, and Clinton indeed led Sanders by 30 points. Many of my friends were totally absent from social media, likely drinking or smoking their sorrows away—others asked, “Who voted for Clinton?” Well, tons of people—they just didn’t talk about it. Every Bernie supporter lets you know about it. I voted for him, love the guy, but realize that this was my first and last chance to vote for him. I changed my registration from Independent to Democrat so I could vote for Bernie, but mostly so I could vote for mayor, and my gal Elizabeth Embry fell far short of her crooked rivals Sheila Dixon and winner Catherine Pugh.

Later, Rachel Maddow relayed a message from the Sanders campaign that is everything but a concession speech. Mourning in America? Dig in deep and get ready to vote for Clinton in the fall, because who the fuck wants Trump’s nubbins on the red button? Bernie’s done. Hillary’s boring, but at least she’ll up the ante on the drone strikes. Trump’s still working on his long performance piece. Hillary knows how to kill, clearly.