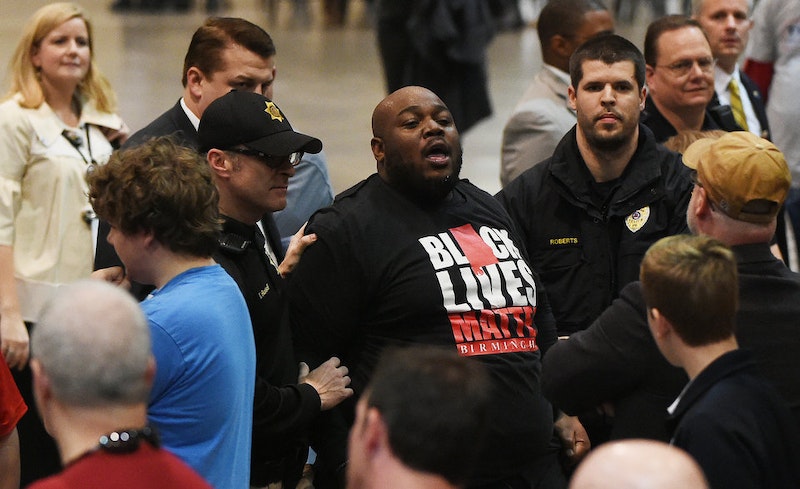 Have we reached a point where liberal purists annoy even President Obama? At a recent speech in London, the President suggested to Black Lives Matter: "You can't just keep on yelling at them and you can't refuse to meet because that might compromise the purity of your position. The value of social movements and activism is to get you at the table, get you in the room and then start trying to figure out how is this problem going to be solved. You then have a responsibility to prepare an agenda that is achievable—that can institutionalize the changes you seek and to engage the other side."

He went on to cite his own experience: "I started as a community organizer trying to pressure politicians into getting things done. And now I’m on the other side."

Over the course of this campaign season, Black Lives Matter protesters have disrupted nearly every remaining presidential candidate at least once. Candidates have had differing responses, from Bernie Sanders inviting protesters on stage, to Hillary Clinton making arrangements to privately meet with them, and Donald Trump having them removed from his rallies. But Obama’s remarks raise some interesting questions: Are these tactics effective or annoying? Do they help the cause or hinder it?

Based on Obama’s remarks, he seems to think the more aggressive and disruptive tactics are a hindrance, and it’s time for the movement to grow up and take more assertive steps in addressing policy directly. I think Obama’s experience is what sells his argument, as well his sensitivity to the movement. He did, after all, invite Black Lives Matter activists to the White House in February.

However, none of that is enough for the liberal purists at Mic, who insist that Obama’s view “…misses the mark by quite a wide margin.” Mic points out instances on the campaign trail where both Bill and Hillary Clinton were disrupted by BLM protesters on separate occasions, and responded haphazardly. Because of those poor responses, Mic describes the Clintons as failures on race relations. The fact is, Hillary has met privately with BLM protesters, and then publicly addressed their concerns. She’s even apologized for some of the previous rhetoric used back in the 90s during her endorsements of tough-on-crime legislation.

In examining the Clintons’ imperfect but open-minded responses to Black Lives Matter, it’s worth comparing it to Republican front-runner Donald Trump’s response. When BLM protesters have shown up at his events, he usually just has them thrown out, and belligerently describes their position as irrelevant. I haven’t found any indication that Trump has ever expressed an interest in meeting with protesters.

Ultimately, I don’t think that Obama’s words will have very much effect on how Black Lives Matter activists choose to proceed. I think the same type of people who hear “black lives matter” as “black lives matter more” could probably try to use this as a warped validation of their position, but it will eventually wear off when they remember they hate Obama. And the same liberals, like Obama and myself, who’ve been willing to consider BLM’s ideas, will continue to ponder their concerns about law enforcement’s overreach.

I think the people who should listen to Obama on this topic are the liberal control freaks who nit-pick everything everyone says because they don’t trust people to make up their own minds. In a recent tirade on his show, Bill Maher described this clique as “compulsively cleaning up one corner of the room, when it’s already quite clean, while there are giant piles of shit everywhere else!”

The end result is that Obama’s concerns are valid, and just as valid as BLM’s concerns about law enforcement getting away with the possible homicides of black Americans. But you can only push people so far, and when you’re trying to convert the choir, you run the risk of alienation.