What did the world ever do to Trump and other populists on the right that they’re so keen to be rid of it? 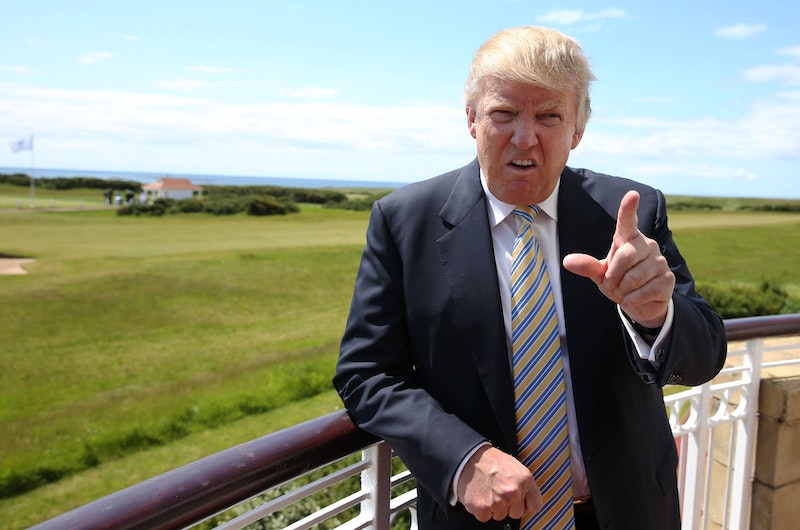 As we turn our eyes from the train wreck of the Republican Party for perhaps the final time, retain in your mind a picture of how its shards twist away, as if in revulsion, from the wider world. Trump’s big foreign policy speech yesterday, as usual, gave off mixed signals aplenty on military intervention but was pretty clear in denouncing NAFTA and global trade. We absolutely must do something, he thinks, to fend off all these inexpensive products people keep selling us, not just to fend off the people who come over here to earn some money with which to buy cheap products.

It’s frustrating that the two most common brands of conservatism currently on offer seem to present, on one hand, a package deal of buying things but also waging wars overseas, and on the other hand, neither buying things or waging wars overseas. As a normal, sane American, obviously I want the international buying and selling to continue without the international bloodshed. That combo isn’t available for some reason.

For decades, when foreign lands and their ostensible leftist spokesmen here in the U.S. lamented the “Americanization” of the world, they mainly meant the spread of American-style commerce and popular culture. What a wonderful, bloodless conquest of the planet. I’m all for that as a highly profitable and very peaceful substitute for actual imperialism. Win-win! But no, we may be on the verge of cutting ourselves off with a snarl from those no-good capitalists across the oceans.

And I don’t even think the handful of libertarians who support Trump on the grounds that he will embroil us in fewer wars should get their hopes up for the fulfillment of that best of the three isolationist planks (wiser than immigration restriction or trade restriction). Trump insists our allies should shoulder more of the burden of their own defense, yes, but he also promises, without specifics, to make short work of ISIS; to bring about “victory with a capital V” in our scuffles with North Korea, Iran, and others; to walk away from the negotiating table any time things aren’t going well; and to greatly increase military spending on the theory that our forces are currently woefully weakened and laughed at. Are you peacenik Trumpistas so sure this will actually end well?

To get my mind off this, I’ll moderate a debate between the leading Libertarian Party presidential contenders this Saturday circa 2:30 p.m.-4 p.m. Eastern, and you can catch the livestream at Facebook.com/NowThisElection or find it archived later at a somewhat longer URL on that page. Spoiler: they love trade.