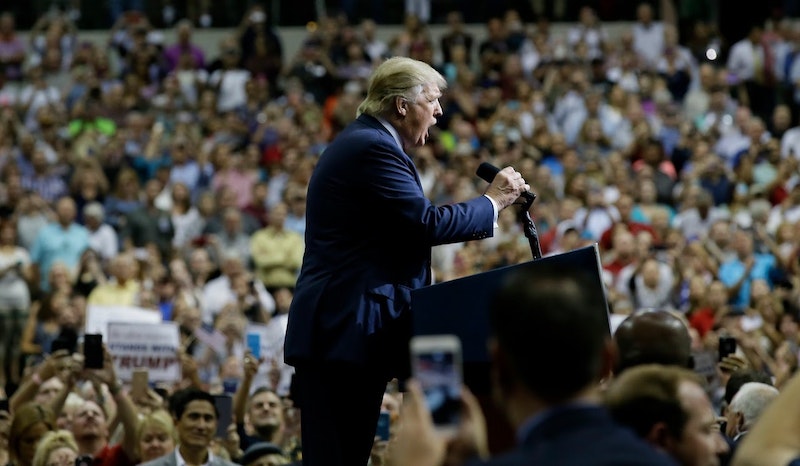 It amazes me that a man as unreliable and unphilosophical as Donald Trump still manages to inspire such devotion from a subset of voters. They frequently liken anti-Trump conservatives and libertarians to willing cuckolds—or “cucks”—who enjoy defeat because it feels natural by now.

The Trump diehards have somehow convinced themselves Trump will fight for what they believe in even though he has not said with any consistency what he believes in. I don’t think I’ve ever witnessed a higher ratio of political success to empty, meaningless wind than is occurring in his campaign.

So, at some point, you have to begin asking yourself whether Trump’s supporters—by now surely aware, on some level, that they’re likely to be disappointed by this double-talking Clinton-pal moderate they’ve elevated within striking distance of the Oval Office (or rather a crushing defeat in November if most polls hold)—want to be defeated.

There’s a disturbing but surprisingly common pattern among abuse victims of avoiding the disappointment of suffering at the hands of a seemingly decent person by deliberately seeking out mates who are obviously, brazenly likely to be abusive.

Might it be that an angry, troubled subset of Republican voters, after decades of having politicians say all the right things and then do only wrong things—prefer to run into the arms of someone who obviously doesn’t believe in or care about the things they value, only about his pathologically egomaniacal self? Does that get rid of the suspense of waiting for the next abusive blow to fall?

I’ve had enough—and will turn my attention to a serious political party now, moderating a debate among the four leading Libertarian Party candidates this coming Saturday in hopes they all prove themselves superior to the Republicans and Democrats.

If you think that sounds like an even more hopeless gambit, you can give me an earful about it in person tonight at my seven p.m. book talk at Muchmore’s Bar in Brooklyn. I assume it will be more civil and sane than a Trump rally, anyway.