Hitchens: Not a Nice Man

Christopher Hitchens is dead. He’ll be remembered for being passionately wrong and very rude. 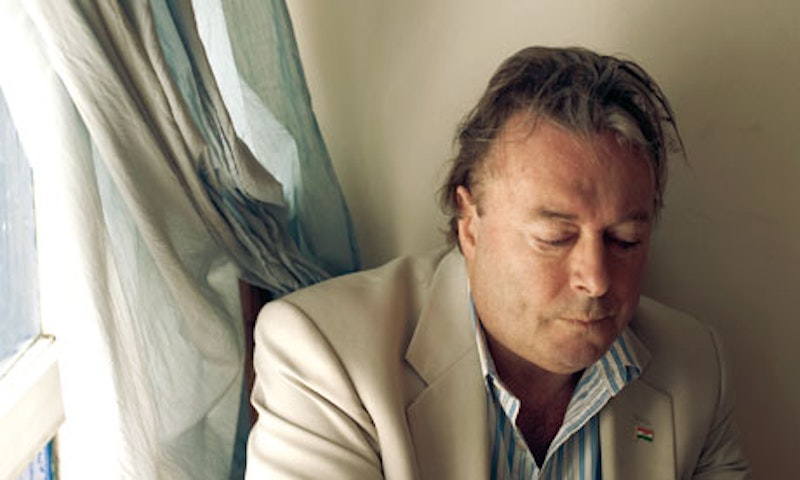 My great-aunt was a fearsome but fair-minded woman who taught math to a few generations of smart high schoolers in New York City. Like a lot of women teachers in her day, she had the brains and discipline to do something with higher pay and prestige but never got the chance because such jobs belonged to men. For my great-aunt, the upside of this ghetto effect was that she had some very intelligent friends and colleagues, and these friends and colleagues often had remarkably well-known relatives. So at one time or another she happened to share tea and cookies with Adlai Stevenson, Albert Einstein, and, oddly enough, Norman Mailer. The meeting was around when Mailer stabbed his second wife in the back with a pen knife. What did my great-aunt think of Norman Mailer? She shook her head grimly. “He was not a nice man,” she said.

Which brings us to Christopher Hitchens. He died on Dec. 15 at age 62, and there’s no denying that he died bravely. Cancer brought him down, doing so slowly and painfully enough that he had to watch his life getting chipped away before it vanished. He wrote about the experience and talked about it, and he did so without a quaver in his actual or metaphorical voice. To see his C-Span interview from last January is to see proof of his personal courage, and proof that there’s more to life than being nice. There’s bravery, there’s wit, there’s erudition and penetrating intelligence, there’s the ability to look the world in the eye and speak out for the right thing. Unfortunately, of that list Hitchens had only the first. Yes, he showed us that bullies don’t have to be cowards. But he also showed that a renowned public intellectual can be nothing but a bully. Be convinced you’re right, be convinced you’re strong, be convinced others are feeble and stupid. Talk loudly. Sneer. That was his action plan and it carried him far.

People believe that Hitchens was a superior sort of writer. I think that’s the benefit of an English accent and a lot of force. I’ve read him off and on for 15 years, and cannot remember a single phrase he turned or a single point he proved. He asserted and he shocked; he flourished involved bits of learning that often turned out to be mistaken but served to intimidate. When he was young he loved Castro and Trotsky. When he was older he hated Bill Clinton. When he was older than that he wanted us to fight Iraq, which we did to disastrous effect. And of course anyone who disagreed with him was feeble and cringing and unable to stand up for the good and swat down the bad.

I well remember his profile in intellectual courage when the weapons of mass destruction failed to turn up. War opponents had complained that the weapons inspectors needed more time. He taunted them after the invasion: Now there would be plenty of time, he said. But it turned out there were no weapons to find. Once the truth dawned, he had to write a column on the subject. Somehow it managed to begin with an age-old Turkish parable about a man visiting a bath house. The column stayed with that parable for almost 200 words. At last Hitchens delivered his point: Saddam Hussein may not have had it coming this time, but he had it coming in general, so all’s fair.

What Hitchens didn’t address was the obvious question: Why did we have it coming? Why did we get hit with this decade-long calamity of a war when everyone who said there were no WMDs—and that there was no threat to the United States, and that Saddam’s fearsome regime was actually a scarecrow—had been proven right? Instead he suggested, not as a joke, that at least now we knew there were no weapons and that Iraq wouldn’t be able to get them. It was knowledge we already had, if he’d been willing to listen. A column like that goes beyond stupidity; it’s more like a symptom for psychiatrists to examine. Hitchens had a brain warped by its inability to be wrong.

Publicly and vocally as he disliked God and Mother Teresa, Hitchens will best be remembered for his part in the war’s run-up, and that part was to be a noisy, obnoxious Snowball for an administration that lied us into disaster. Looking back, 10 years ago would have been a very good time to be a dauntless speaker of truth against authority and the mob. There were such people, but Hitchens wasn’t with them. He said they were cowards, and he did it because he was one of the bullies.