The Dangers of SOPA

Rep. Lamar Seeligson Smith and his allies know not what they do, and that's kind of the problem. 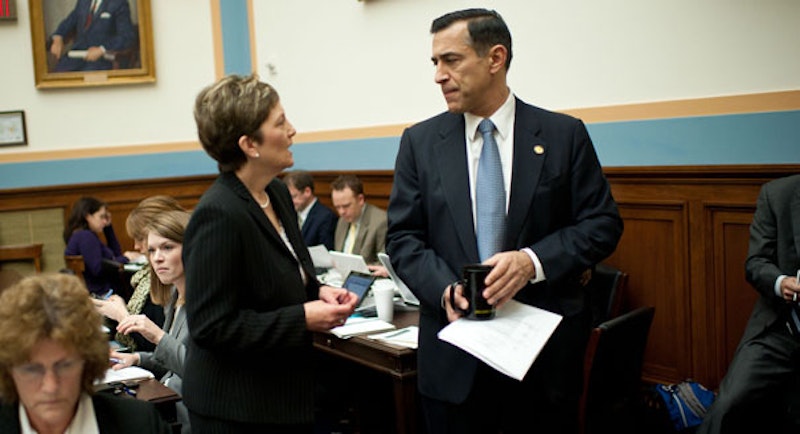 Rep. Lamar Seeligson Smith (R-TX) is a dunce. He’s the one who introduced the Stop Online Piracy Act (SOPA) into the House in October, a bill that would give the Justice Department the authority to block/hang any website with unauthorized copyrighted material and any site that links to it. Ostensibly the bill aims to make torrenting as hard as possible to maintain the integrity and value of intellectual property—okay, not bad. Unfortunately, Smith and all his bipartisan co-sponsors are going about it with the grace of a blind man wielding a sledgehammer. SOPA is dangerous because it’s legislation based on misinformation and naïveté, drafted and voted on by people who have no idea what they’re doing.

SOPA would seriously restrict the rights of social networks and media aggregators like Reddit, Tumblr, Facebook, YouTube, and Twitter: just one instance of copyright infringement (say you post a screenshot of Breaking Bad on Tumblr, or link to it anywhere else—that site is subject to immediate and indefinite blockage). As Rep. Darrell Issa (R-CA) said during the bill’s House Judiciary Committee meeting, this stuff is China-esque, and to see such absolute power in the hands of monkeys is more than scary. The Internet is not a series of invisible storefronts, as much as the Greatest Generation and Boomers want to believe it to be. You can’t eradicate piracy like a mob-owned Laundromat—the fluidity and flux of the Internet makes dated, faith-based approaches like this totally ineffective and dangerous.

It’s infuriating watching the House Judiciary meeting and watching some of these people, particularly Smith, Bob Goodlatte (R-VA), Howard Berman (D-CA), and John Conyers (D-MI), speak on things they know nothing about. Again and again, the Pirate Bay is cited as the 89th most visited site in our country, and immune to prosecution in its Swedish base, as if every single person who’s ever visited the Pirate Bay downloaded a movie or an album. So many of the numbers they cite, like the “nineteen million” jobs the creative/intellectual property industry supports, are so absurdly inflated and misleading that it makes the whole thing seem like a big sick joke. I mean, on principle, people should not be allowed to vote on something about which they have a severely limited understanding.

Jason Chaffetz (R-UT) responded to the insanity with a basic question: "Don't you think it would be reasonable to do research and have discussions with experts about the possible ramifications of the bill?" Howard Berman’s reply: "I think the reasonable thing to do is show the seriousness of our intent by moving this bill forward.” Piracy is a nuanced problem, practically (high-quality torrents easily available by anyone), and culturally (the erosion of the idea that we should have to pay for art, simply because we don’t have to. It’s an impossible case to argue, but no one is going after it with a coherent alternative. Goodlatte defended SOPA by claiming that the opposition never suggested a better alternative, as if shooting your kneecaps off after a cancer diagnosis makes any sense at all. But this is Congress, where all remain gainfully employed despite a basement-level approval rating. They’re bored, let’s just pass the thing. The slopes are waiting!